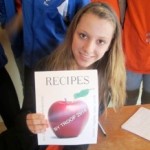 The cadette Girl Scouts of Cold Spring’s Troop 2914 may not have been able to cite the exact wording of the rules applicable to the Silver Award, but they got the spirit of it just right. Scout Leandra Rice, one of the nine eighth-grade girls involved in the troop described it this way: “It’s all about giving back to the community — our community project. The troop, not the troop leader, has to come up with an original idea and plan the whole thing. It has to be something everlasting — after you finish, it has to continue.”

Another required component is that each girl must put in 40 documented hours spent working on the project, 15 of which must be leadership hours in which that girl takes charge of one aspect of the whole. No one can just be a helper. Eight of the nine girls in the Troop participated in this Silver award, while one troop member, Caroline Casparian, devised her own award, creating a website for the Girl Scouts community to facilitate communication and the flow of information among local troops. She completed her project on Sept. 30 and will be receiving her award towards the end of November. 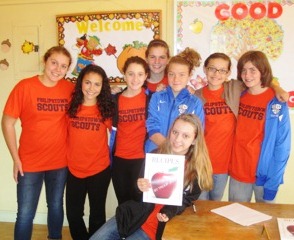 Troop 2914 after the conclusion of their Food Pantry cookbook distribution

Philipstown’s Deidre Knapp is the volunteer community chair for this region’s troops. In her words, the Silver Award “is the highest award a cadette Girl Scout can earn. It gives them a chance help improve their community or develop something in their community. The Silver Award allows the girls to show leadership and organizational skills. The Silver award helps pave the way for the girls who will go on to earn the Gold award which is the highest award a senior or ambassador Girl Scout can earn.” The Gold Award is akin to the Eagle Scout honor in Boy Scouts.

The Silver Award is the culminating activity for the cadette level of Girl Scouts, who, generally speaking, range in age from sixth to eighth grade. Troop 2914 is currently one of the more senior-ranked troops in Philipstown, both in age and longevity; there are senior and ambassador Troops as well, with high-school aged girls. This Troop was founded about seven years ago by its original leader, Sue Costigan, and, in a rarely-accomplished feat nowadays with kids splintering off into so many time-consuming activities, 8 of the 9 girls in the troop have been members from the inception. For the past few years the leaders have been Marie Kane-Seitz and Carol Casparian, who were joined for several years along the way by Dawn Zichko.

The planning for the Silver Award began in May after the completion of the “Your Own Business” badge, which was accomplished with the help of local business owner Caryn Cannova of Payning By Caryn, who talked to the girls about what it takes to manage a business. It was then up to the girls to come up with and agree upon the project.

Genesis, Process and Results (for clients and Scouts)

Scout Tobey Kane-Seitz was volunteering at the Philipstown Food Pantry, which the troop had been doing throughout the year, when she noticed a client asking an adult volunteer if there were any more cans of the chili she had liked from an earlier visit. The volunteer told her that there were none that week, and suggested instead that the client try making it, starting to give verbal advice. The client found that having to remember all the details was quite difficult. This put an idea into Tobey’s head: how about making up a cookbook, focusing on the type of goods generally available at the pantry, to distribute to food pantry clients? Everyone thought it was a great idea, with the addition of “and let’s make sure that the recipes are nutritious,” as well. 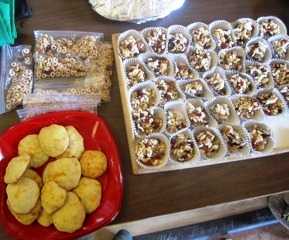 Some of the nutricious and taste recipes come to life

Over the summer the girls were responsible for discovering suitable recipes, tweaking them to make them as nutritious as possible, and recipe testing. By September they were ready to compile them; type them all out in a format similar to each other; obtain a printing quote; figure out a budget to include the 50 samples of a recipe each that each girl was responsible for bringing to the pantry when the cookbook was unveiled; and liaise with the food pantry about the logistics of distribution. Each girl had to take ownership of one or more of these steps.

A week before the big date, one girl went to the pantry and distributed flyers to the clients, making them aware of what would happen the next Saturday. Finally, the day arrived and the girls set up all of their samples and stacks of cookbooks and eagerly awaited their customers with their trays filled with servings of stew, trail mix, pasta, Sara Procario’s special cheese and garlic biscuits, and more. Joan Crouch, a pantry volunteer, described the occasion: “It was great. I told a lot of the clients they were waiting inside for them. The clients couldn’t believe it and were saying things like ‘But I don’t have any money’ or ‘I can’t give a donation,’ but I said ‘absolutely not, they’re doing it for you. They couldn’t believe it and were thrilled.”

The scouts themselves concurred, with Sophia Patterson noting that, “I got only positive feedback. People were thankful and surprised it was free.” The scouts said they had gained a great deal from the whole experience, “I learned we can help the community — it’s not that hard — it’s easy. I feel like we did something good, we actually accomplished something,” said Marissa DiPalo, with Lucy Austin echoing, “It used to feel like we were making up ideas; this time we actually did something. The biggest part was actually being here, bringing in some kinds of food that they may not have tried, and just bringing friendliness.”

Clara Thompson called “Coordinating everything so that everyone actually did the work,” the most difficult aspect of the endeavor and Allison Marino said with relief, “I’m so happy that we did it — we actually finished it!”

Jeanne Patterson, a pantry volunteer and grandmother of troop member Sophia, declared it “marvelous. I think it’s going to help our clients tremendously. It was fantastic, particularly for the girls. Everyone was so overwhelmed with it. It’s wonderful for anyone of any age to learn to give to the community. And the food was delicious!” 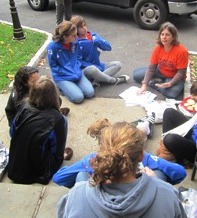 And what did Troop 2914’s co-leader, Marie Kane-Seitz, who tirelessly oversaw the whole project think the girls got out of it? “The girls were very excited to take on the challenge of the Silver Award. I, however, was a little hesitant not knowing if they would have the time or energy to complete the task. The girls are all very active in the community, with scouts, sports, theater, and music. The Silver Award requires 40 hours on their project in addition to 15 leadership hours and a bunch of prerequisite badges. This is a three-year process that requires a lot of dedication. Today I am very proud of the girls in our troop for completing the challenge. I think they learned how to take ownership of a project, reach out to community members, take responsibility for a task on their own as well as work as a group to put all of the pieces together.

Several people at the food pantry have also reached out to our troop as a result of this project. They have asked us to get involved in the Midnight Run project and also to reach out to the Girl Scout community to collect Thanksgiving pies for the Food Pantry. I think the troop realizes that there is always time to help the community and that they get as much out of helping people as the people they are helping.” Any parent of a girl interested in scouting should get in touch with Deirdre Knapp at [email protected]

For others in the community who would like to heed those words of “there is always time to help the community,” the food pantry can always use help both during the holiday season, and throughout the year, as hunger doesn’t abate after the holidays are finished. The pantry is always in need of many things: volunteers (it needn’t be every week), donations of canned goods and other non-perishables, and most of all, monetary donations. According to the pantry’s Karen Tangen, the number of food pantry clients keeps rising. At the moment there are approximately 36 to 40 families who come to each Saturday morning distribution, a number they used to reach only on the holidays. They expect the number to rise to about 50 families during the holiday season. Tangen says that the two pantry freezers are filled up each Friday and are bare after the distributions. All sort of goods are needed: canned fruits and vegetables and soup; peanut butter, jelly, cereals, and oatmeal. These may be dropped off any weekday during the hours that the Community Nursery School is open, generally 9 a.m. to 12 p.m., as well as on Saturday mornings. For the holidays, if people want to drop off fresh food, from vegetables to baked pies, the pantry will be happy to receive these donations on Friday afternoons as well as early Saturday morning, from 8 a.m. onwards. Also appreciated are turkeys, hams and roasting chickens. Foodtown points may also be donated. This can be done easily at any cash register. Foodtown presents a check to the pantry a couple of times a year based upon these contributions. Thanks to a grant from the Salvation Army (which is based on how many the pantry serves), pantry volunteers shop for the pantry, seeking out the best deals, from Foodtown sales to further afield, at Sam’s Club, Shoprite, and, in particular, at the Food Bank in Cornwall, which has the biggest discounts. 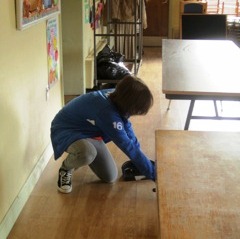 There are other things too, which might not immediately come to mind: Christmas trees for example. Several have been donated by the Ambulance Corps and the Boy Scouts from the stock each sells in December, and individuals might want to make a similar donation. The Marine Corps-sponsored Toys for Tots always contributes toys to the pantry, and collection boxes will be set up throughout Philipstown in December. Volunteers are always welcome and needed. Tangen says anyone interested may simply turn up on a Saturday morning — around 8:30 is best — the first time. They can try it out and then decide whether to make a commitment, which needn’t be every Saturday. If you would prefer to discuss volunteering first, before turning up, call the Presbyterian Church at 265-3220 and ask to speak with the church secretary, or leave a message and your call will be returned.

As always, donations and attention crest during the holiday season. Donations and volunteerism are always lower after the holidays are over, in particular in January and again in the summer, so everyone is urged to please keep that in mind during the new year.
Photos by A. Rooney