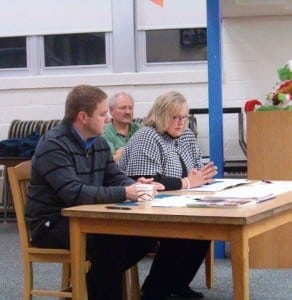 The New Dignity Act, going into effect July 2012 seeks to codify character education parameters throughout the state. These parameters include: board policy, code of conduct (written in plain language,) creation of a dignity coordinator, a training plan and reporting requirements. Michael Williams, Garrison Union Free School (GUFS) guidance counselor and the person responsible for implementation, described the act as a new “state mandate” but one that “is not very specific” in describing how it is to be implemented. Williams said that GUFS already has these elements in place and it only remains to “fit [them] into the new policy.”

Principal Stephanie Impellittiere and Williams made a presentation to the GUFS Board of Education about the school’s character education program at its Dec. 7 meeting. Under the aegis of Williams, the program seeks to address the “social and emotional needs of the students.” This includes providing students with “tools to solve problems” and “strategies for facing conflict.” Aspects of the program are taught within the classroom and include discussions about drug and alcohol abuse, bullying and conflict resolution. The larger portion, Williams and Impellittiere agreed, takes place in the “hallways, playground and on the bus.” Williams said he spends 80 minutes a day on the playground with all grades. Being “a visible presence in school … is the most important thing,” he said. Part of that presence is being outside to greet the students getting off the buses in the morning. Williams described one occasion where a student (walking from the bus into the school) asked to meet with him later to discuss a problem. Another more anonymous way for students to contact Williams is via the “Bully” box and “Compliment” box. Located in several locations in the school, they provide a channel for students who might not otherwise contact him directly.

Both Williams and Impellittiere emphasized the school’s non-judgmental approach, addressing bullying and other conflict-related issues in terms of “good choices and bad choices.” In more serious instances Impellittiere described a process called The Garrison Way.” The student is required to write an essay about the situation in question, describing the choices that led up to it, the consequences of those choices and how other choices might have been more effective. This essay is shared with the parents.

William’s goal is “to be available [to students] … and to model behavior for teachers and staff.”  He emphasized a team approach to create a school culture of “empathy and forgiveness.” Working directly with Williams are Jessica VanDekker (psychologist), Lisa Bisceglia (social worker), Judy Dunstan (school nurse), and Impellittiere. More broadly, Williams indicated, the team also includes teachers, staff and parents. The team’s goal is to “be proactive … and not reactive.”
Photo by M.Mell