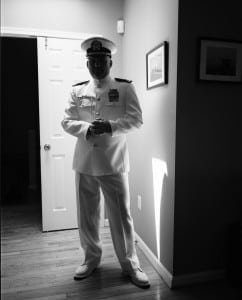 Fovea Exhibitions presents another panel discussion that furthers their mission to promote understanding of global and social events through the medium of photojournalism. The upcoming panel being held on Saturday, Jan. 14, at Fovea Exhibitions in Beacon, at 5 p.m., is an opportunity to further explore the important issues — both on a personal and at a national level — raised in the current show Gays in the Military: How America Thanked Me. Photographer Vincent Cianni will present a brief history of this project and speak with invited panelists who have all been at the front lines of this ongoing debate. They will discuss their experiences and the ramifications of the ban during the time they served and the effects of that ban on their health, careers and personal lives.

Lieutenant Colonel Victor Fehrenbach (U.S. Air Force 1991-2011) is traveling from Washington D.C. to participate. He is now retired, having successfully fought DADT (Don’t Ask, Don’t Tell) after coming out on the Rachel Madow show in 2009. He is a former F-15E fighter pilot with tours of duty in Iraq (including Operation Iraqi Freedom), Kuwait and Afghanistan, and has flown 88 combat missions with 400 combat hours.

Captain Chuck Maxwell (U.S. Air Force 1980-1991) and currently living in Decatur, GA will also be traveling to Beacon to attend this event. A graduate of The Citadel and a commissioned officer, he was dismissed for conduct unbecoming an officer.

Also joining the discussion will be Mary Barber, M.D. She is the clinical director at Rockland Psychiatric Center, and co-editor of the Journal of Gay and Lesbian Mental Health. Her expertise includes the effects of the ban on the mental health and lives of service members.

The definition of the word fovea is “A small depression in the retina, constituting the point where vision is most clear.” This event will bring clarity to an issue being played out on both private and public arenas; one that vitally concerning professionals in the military who already face challenges in their line of work. The photographic exhibition by Vince Cianni began when he heard the story of a private who had been discharged from the Army while serving in Iraq as a result of being “outed” by a fellow soldier. Since then, Cianni has traveled the country and recorded oral histories and portraits of over 50 veterans and service members. These are representative of thousands of stories that have gone untold. Gays in the Military: How America Thanked Me will be on exhibit at Fovea through Sunday, Feb. 5 and is open weekends from noon until 6 p.m., and by appointment at [email protected]

Fovea is an educational charity that has presented almost 25 exhibitions and educational programs in the past four years on diverse topics such as The Iraqi Refugee Crisis, The Children of Darfur, Bosnian Diaries, Planet China, Lebanon Conflict, Prison Culture Behind Bars, Rwandan Children of Violence, the earthquake in Haiti, and the Japanese Tsunami disaster. Fovea is 100 percent volunteer staffed.