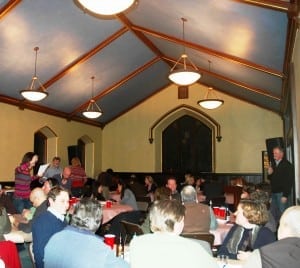 OK — Who knows the first seven words of the Declaration of Independence? How about the names of the two singers of the 1980s rock band Eurythmics? Or what golf great won only one masters’ tournament in 1986 after entering four? Or what color star has the hottest temperature? And, by the way, what do the first two letters of WD 40 stand for? [Answers below]

Questions like that stumped, stymied, and prompted nearly three hours of entertaining enlightenment at the third annual Haldane School Foundation Trivia Night on Friday, Jan. 20, held in the Parish Hall at St. Mary’s Episcopal Church, Cold Spring. About 90 trivia buffs paid $35 each to attend, eager to stretch their minds; warm up with bowls of chili; lubricate the concentration with beer, wine and other libations; and form 15 teams with such names as Fred, the Mamas and Papas, Newbies, Crazy 8s, Liquid Iron, Trivia Thunder, BLT, By Any Means Necessary, Malabar, and Parish the Thought –- “I’ll explain it to you later,” Dan Hughes, quizmaster, said of the latter. Laughter, shouts, cheers, poised pencils, and cries of bewilderment greeted each round of questions from Hughes, who serves as president of the Blue Devils Booster Club when not pursuing trivia. “Are you feeling confident?” he asked as the competition began. “I will do my best to strip that from you!” After 40 questions, some of them multi-part, By Any Means Necessary won the contest, though its members were too demure to give their names.

The event raises funds for the Haldane School Foundation, which supports projects and programs for students of the Haldane Central School District. Diane Hughes, a foundation trustee, estimated the group raised about $2,500, but added that Trivia Night is more of an outreach activity than one intended to bring in lots of money. It’s a way “of getting our name out there and sharing what we’re doing for the kids,” she said.

Answers
Declaration of Independence first seven words: “When in the course of human events…”