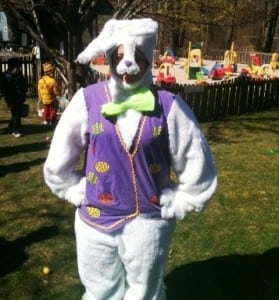 The Easter Bunny (aka Gianna Grandetti)

100 children in the hunt at McConville Park

The local Knights of Columbus kicked off their ninth-annual Easter Egg Hunt under sunny skies Saturday morning (April 7). Held at McConville Park, the event drew about 100 children. The young hunters were joined by their parents, several Knights of Columbus members and volunteers from Teens Rocking Out to Catholicism (TROC), a youth group from Our Lady of Loretto Parish.  Speaking of rocking out, attendees enjoyed a pulsating soundtrack of such seasonal toddler favorites as ‘Let’s All Do the Bunny Hop’ and ‘If You Love the Easter Bunny’, made possible by Fred Clarke, a Knights member who acted as DJ. 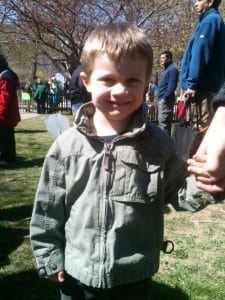 Asked if she was drafted to play the Easter Bunny, a smiling Gianna Grandetti, said, “No, I volunteered for this.” It was a role that required her to don a full-body bunny outfit. Grandetti was also one of the TROC members who helped prepare for the event, which involved filling 1,800 plastic eggs with sweets.

Knights member Dan Dillon emceed the event and made a point of  thanking the local merchants who contributed gift certificates awarded to the children who discovered the  ‘golden eggs’ hidden in the park. Mr. Dillon also had the pleasure of announcing Dashel Meissner as the winner of the Jellybean Jar Contest. As of the filing of this story, the young Mr. Meissner wasn’t granting interviews, but he did flash an ear-to-ear smile for photographers.
Photos by P.Smith