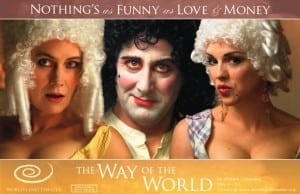 he Way of the World opens May 4

World’s End Theater Company, the local, professional group which produced last season’s well-received version of Chekhov’s The Seagull will be presenting their second full-scale production of William Congreve’s Restoration comedy The Way of the World at the Depot Theatre, from May 4 to May 27.

To support this production (now in rehearsal) and their other endeavors, the board members and artistic associates are throwing a fundraising party this coming Saturday, April 14, from 5 to 8 p.m. at the Cold Spring home of Joe and Kathy Plummer.  Attendees are promised a first look at the brand-new “teaser” for the production, along with cocktails, hors d’oeuvres and spectacular Hudson views.  Actors and creative staff from The Way of the World and The Seagull will be on hand to talk about the aspirations of World’s End Theatre, whose stated goal is to present “timeless texts in the present moment,” and whose actors include Actors’ Equity members performing under special Equity contract.  Read a feature article from last year on the then-new company.

Tickets for the party cost $75 ($55 of which is tax-deductible) are still available online.  .  For more information on World’s End Theater, visit their website.  Tickets for The Way of the World may be purchased online. .

All proceeds will support this new regional theater company.