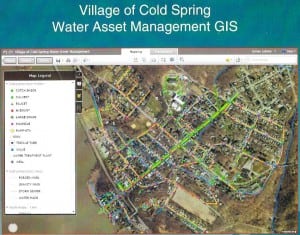 Past and present merged into future possibilities Tuesday night (May 29) when the Cold Spring Village Board got an overview of a high-tech system that combines new data with 1904 maps to pinpoint water problems, consolidate records, and potentially save money and hours in dealing with village infrastructure demands. The board, again missing two members (this time, Trustees Ralph Falloon and Matt Francisco) watched an on-screen presentation by James Labate, an expert in digital mapping and spatial analysis, who volunteered his skills to Putnam County after Hurricane Irene last fall. He then got hooked up with Cold Spring and began exploring the innards of the village’s aging water and sewer systems, creating a multi-faceted database “On anything to do with the water system” by applying a GIS (geographic information system) package from a California firm. Free to local governments –- up to a point -– the system allows water and other municipal departments to juxtapose current data and aerial photographs over old maps to help find old pipes and hidden components and breakdowns; compile records of repairs and lists of pipe valves, hydrants, manholes, pump stations, catch basins, and other accoutrements; analyze ongoing needs; add more material as projects ensue; and otherwise keep an electronic handle on the myriad details inherent in maintaining village infrastructure. “Everything is in one place,” Labate said. “You combine” the various parts “and have an overview of the entire system through this.” Pulling up a slide of the 1904 water system specifications and map alongside modern data, he showed how “you’ve got all this information” together, including “the original layout, most of which is still in place.”

Water and Sewer Superintendent Gregory Phillips confirmed that 80 percent of the pipes date from 1904. Likewise, the electronic system can store information, including locations, of traffic signs and other street equipment and serve a variety of purposes. Labate added that if the village embeds the system on its official website, the public can access it, too, and peg problems that may not yet have come to the attention of village crews. 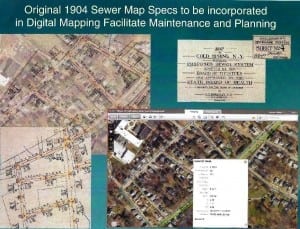 Moreover, the system can extend to other areas as well, as Labate demonstrated. Taking an Environmental Protection Agency diagram of the “plume” of pollution still underlying part of the old Marathon battery plant grounds, he superimposed it atop an aerial photograph of the Marathon site, showing how the plume laps out toward homes on Constitution Drive. (He cautioned the news media against taking pictures of the new image, due to the proprietary nature of the aerial photo involved.) Even more can be accomplished, Labate told the board, if the village obtains the more sophisticated elements of the package beyond those provided free as a public service. However, the add-ons can get expensive, he said. Nonetheless, he emphasized, even the free elements can provide significant assistance.

The board members and Phillips agreed.  “I know it’s going to be very beneficial for Greg” and the water and sewer staff, Campbell said.

​“And sidewalks,” Mayor Seth Gallagher chimed in, noting the potential for keeping track of sidewalk and street improvements.

Phillips observed that Putnam County has the full, paid-for GIS package and that if the village could team up with the county, it might be able to access the higher level of service. So far, Labate has given the village $3,300 worth of service without being paid, according to Village Clerk Mary Saari. Going forward, he proposes a fee schedule for his help, with charges ranging from $20 or $25 an hour for various tasks to $300 for a survey of fire hydrants, providing identification numbers, condition of each, flow and pressure data, test results, and similar details. “What I’m proposing is to take the database and finish it in different segments or tasks,” he told the mayor and trustees. They took no immediate action on his offer.

Assistant Building Inspector Appointment
After the GIS presentation, Campbell, Gallagher and Trustee Chuck Hustis all voted to appoint Building Inspector Bill Bujarski to the posts of assistant building inspector and fire inspector as well. The positions, previously undertaken by one person as a combined job, had been left vacant after the resignation of Bujarski’s second-in-command and he had been assuming those assignments as well as his own. To ensure that necessary duties get carried out when Bujarski is on vacation henceforth, the mayor proposed a form of consolidation of services with the Town of Philipstown by bringing in the Philipstown inspector. “We can work that out with the town,” he said.

The board also unanimously approved a new three-year lease of a parking lot behind the Cold Spring Boat Club for use by Hudson House, formally known as the Hudson River Inn. The terms require the inn to pay $4,374.81 in rent for the first year, with a 3 percent increase annually after that. The lease also “allows us, in an emergency situation, to do what we need to do,” the mayor said, mentioning as an example shutting down the parking during a clean-up of hazardous subterranean coal tar at the Boat Club.

When that clean-up might get underway is uncertain. Initially, the New York State Department of Environmental Conservation tentatively scheduled preliminary work for late summer 2011. Then budget constraints and other contingencies apparently got in the way, Campbell said, and “now they’re looking to the fall again.” Which fall and year remained unclear and he promised to contact DEC to check the project’s status.

Other business, the board:

Contingent upon the approval of the building inspector, granted a request from Anne Lin to place a table and two hanging racks from 10 a.m. to 9 p.m. at 112 Main St., outside the Ming Moon Kitchen carry-out and store.

Waived the $250 charge for use of the bandstand at the Hudson River for a family wedding involving residents. “If you’re a local family and getting married in the village, I’d say you shouldn’t have to pay the fee,” the mayor said. His two colleagues concurred.​

An attempt by the mayor to call a closed or executive session to discuss a personnel matter failed when Hustis voiced opposition. Such votes need a majority of the entire, five-man board, not a simple majority of those present.
Images courtesy of Cold Spring village clerk’s office