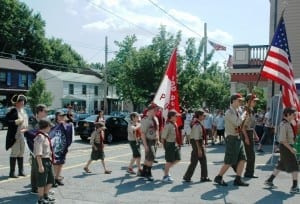 A few words from Gen. Putnam, too

With top hats, skirling bagpipes, swirling skirts and time-travel visitors from the early 19th century, local political officials on Sunday gathered at the Cold Spring firehouse on Main Street to celebrate the 200th birthday of Putnam County, carved from Dutchess on June 12, 1812. Accompanied by a flag honor guard of Boy Scouts and War of 1812 “soldiers,” Cold Spring Mayor Seth Gallagher, in his Hudson Highlands Pipe Band regalia, heralded the official start of the proceedings with the plaintive notes of the bagpipes. 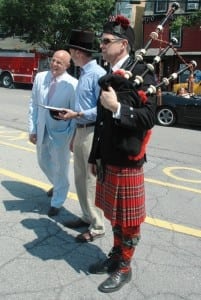 Odell observed that the festivities began in Carmel on Saturday (June 9) and then continued on the western side of the county. “We celebrate our independence, our freedom … all our core values” and good qualities as the people of the county, she said, her aqua summer dress a bright contrast to the dark military tones of Gen. Putnam’s attire and Scouts’ khaki. She invited everyone to Carmel on Tuesday (June 12) for the opening of a time capsule buried in 1962, when the county turned 150.

Pataki pointed to the way the celebration brought the sometimes distant eastern and western ends of the county together. “I’m so happy that east is meeting west,” she said.

Tamagna took up the theme of unity, too. “We want to see Putnam whole. We want east and west united. We’re all one,” he told the gathering, which included residents, visitors, and passers-by of all ages, listening attentively while sometimes seeking shade under awnings set up to sell Cold Spring Fire Company No. 1 T-shirts and food. 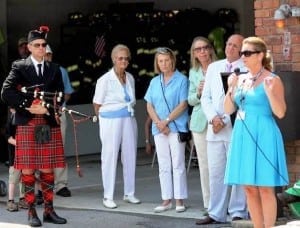 Along with east-west county unity, history, not surprisingly, was a major theme of the day. “I could not be more pleased” than by an event “that occurs by celebrating our history,” Pataki said. ”In 200 years some things haven’t changed” in Putnam, despite all the differences between 1812 and 2012, she said. For one thing, she explained, “we have the friendliest people I’ve known anywhere,” keeping the best values of 200 years ago. Likewise, “we’ve been told we’re the smartest county, the safest county … the sweetest county.”

Gen. Putnam took a humble and skeptical view of how the county came to be named after him, acknowledging that his mixed record in the Revolutionary War probably had little to do with it. Instead, he attributed the move to pure politics: Desires to stop the Federalists from achieving too much power in New York State, with the establishment of a new county not under Federalist sway seen as an effective counterbalance. In short, the non-Federalists needed another vote, he said. “So I think that may be why they named the county after me” and cut it loose from Dutchess.  On a personal note, “I must say the county might be looking good but for 200 years old, I look pretty good, too!”

A reading of the official proclamation creating the county, singing of two verses of the national anthem, with local storyteller Jonathan Kruk helping carry the tune, and a thank-you to Donald MacDonald, Philipstown bicentennial organizer, rounded out the program. At the conclusion, politicians and public escaped the heat by entering the cool firehouse for birthday cake and other refreshments.