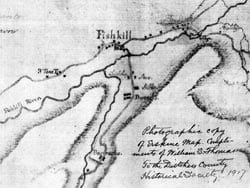 In the latest offering in its Bicentennial Lecture Series, the Putnam History Museum (formerly the Putnam County Historical Society) will present a discussion of the Fishkill Supply Depot: The Old Post Road and the Revolution, on Saturday, July 28 at 5 p.m.

The Fishkill Supply Depot website describes the Depot as follows:

“The Fishkill Supply Depot has been listed for decades in the National Register of Historic Places and consists of more than 70 acres on the east and west sides of southern Route 9. Here more than two centuries ago, thousands of Continental Army soldiers weathered the winters of 1776 to 1783 and blocked the British strategy of advancing unopposed up both sides of the Hudson to secure a line of communication from New York City to Canada.…

“At its peak, the encampment, built under orders from George Washington with its headquarters at the Van Wyck Homestead, was a small city which included extensive barracks and officer huts for thousands of soldiers, guard house and palisade, a prison, major hospital, artillery placements, storage buildings, an armory, blacksmith shops, stables, parade grounds, and a powder magazine that supplied all Northern Patriot forces. Today, the only maintained structure is the Van Wyck Homestead, a farmhouse that served as a headquarters for military operations.

“Declared as ‘the last of the important Revolutionary War sites yet to be properly explored,’ the Fishkill Supply Depot remains so today: a one-of-a-kind site of national importance that has never gotten its due. … The Depot was a key strategic center of the American Revolution, established and visited repeatedly by George Washington. Known as the ‘military nerve center of the Continental army,’ the Depot was one of three major encampments, along with Morristown and Valley Forge. Hallowed history happened here — hundreds of the original soldiers who fought to found the nation died and were buried here in unknown graves.

“Central to the outcome of key battles like Saratoga, the Depot played an important role in the founding of the United States. … Yet today … [it] is under threat of development. A large part of the historic site was covered by the Dutchess Mall in the early 1970s, followed by the Hess Gasoline Station in the 1990s. Two remaining open space parcels, one in the vicinity of the Hess Gas Station and the other known as the Oasis​ Ministries parcel, are currently for sale with development envisioned.”

The Fishkill Supply Depot site was added to the National Register of Historic Places in 1974.