Little if any public concern over sale of Haldane lands

If no news is good news, then the Haldane Central School District got quite a bit of good news at its Sept. 11 (Tuesday) public hearing on the proposed sale of 10 acres of property that it owns. Only a handful of people attended the hearing, and most were associated with either the school or the volunteer committee raising money for PLAY Haldane, the name given to the sports field project fundraising effort.

Trustees favor selling the 10-acre James Pond property just off of Cedar Street in order to help fund the $2 million project to install artificial turf and a walking track at the main sports field on campus along with improvements to the school auditorium and new lockers. The property has been valued at approximately $425,000. In order to realize that revenue, the school board must gain public approval of the land sale in a referendum to be held on Nov. 13.

Ironically, the public approved the development of a sports field complex on the James Pond property itself in 2003, but the project was halted when neighbors sued the district. A settlement resulted in an agreement that severely limited the district’s ability to develop the land, including a prohibition on any development within 100 feet of the pond.

The 10-acre James Pond property features a wooded landscape with a number of steep slopes. Haldane officials estimate that if sold, two to three houses could be built on the site. Photo by M. Turton

Local resident Gina Van Nosdall spoke in favor of the land sale. “There is a lot of trust in the school board,” she said. “You’ve done your due diligence. This is a good story.”

The hearing was held at an unusual time — from 6 until 7:15 p.m. Most school board meetings begin at 7 pm. When asked why the hearing was held earlier, Superintendent of Schools Mark Villanti said that other meetings related to the sports field project had been held at 6 p.m. and that the additional 15 minutes were added to ensure that anyone who assumed the meeting was at 7 would still have time to make comments. He said he had considered moving the meeting to 6:30 but that advertisements had already been placed, making it difficult to switch.

Andy Chmar, executive director of the Hudson Highlands Land Trust, did in fact arrive late, but offered little in the way of comment. “My only hope is that this pond, which has been a resource for the district, will continue to be a resource,” he said, adding that the land trust would help in any way it could. The pond is used as an outdoor classroom for environmental studies.

Trustees and administration have stressed that if the property is sold, the district would retain rights to use the pond for educational purposes. In presenting various options at the hearing, School Board President Michael Junjulas said that the district may opt to retain ownership of a small strip of land along the property’s southern boundary. Possible uses of that property include parking or tennis courts. Regardless of whether all or part of the property is sold, voter approval is required.

Map showing the James Pond property in a possible three-lot configuration: Cedar Street Spur is the western boundary of the property and Half Moon Ridge Road is its northern limit. The property has been valued at $425,000. Photo by M. Turton

Dan Hughes, who co-chairs PLAY Haldane along with Haldane School Board Trustee Jon Champlin, was uneasy about the lack of a public turnout and possible voter apathy in November. “I’ve lived here for 18 years and seen elections decided by one or two votes,” he said. Turning to the cable television camera, he addressed the public directly saying, “Don’t assume your vote isn’t needed. Whether you’re for or against (the sale of the property), come out and vote.”

Villanti said that what he has been hearing is that as long as the fields project does not result in a tax increase, residents are for it. The money that can be raised through the land sale is a key component of the project’s funding, and trustees are committed to not raising taxes to make up any shortfall. When Van Nosdoll asked what would happen if the referendum is defeated, Junjulas responded, “That is the toughest question. I think the project would go down. I don’t like saying that because it sounds like a threat, but I think the project would go down.”

Villanti disagreed, at least in part. “What if the whole enchilada fails? Smaller pieces will continue,” he said, pointing to the new lockers as a component of the proposed project that might still be undertaken. “But there would be a lot of disappointment,” he added. Villanti said that the form used for contributions indicates that if the fundraising goal is not reached, donations can be used for scaled-down initiatives. 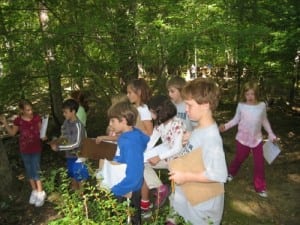 If the James Pond property is sold, Haldane would retain access to the pond itself and continue to use it as an outdoor classroom as it has in the past. Photo courtesy of Haldane Central School District

If the referendum passes, sale of the land could still be years off. Villanti said that the district would have “about a 5-year window” for completing the sale. “We want to make as much money as possible, right?” he asked, indicating that timing of the transaction could affect the sale price.

Trustee Peter Henderson said that while he has not heard of opposition to the land sale, there are other stresses on the public’s mind. “To be honest, it’s been very quiet. I take from that the public doesn’t have many concerns” regarding James Pond.

Later in the meeting, however, he said, “There is a lot of anxiety over property taxes,” citing big municipal projects such as work being carried out on Cold Spring’s water main and the potential development of the Butterfield Hospital. “They’re all important, but they all have a price tag,” Henderson said. “We’ve said from day one that we’re sensitive to that (not raising taxes), and that’s why we’re proposing the sale of the property.” He also stressed the need to be diligent in looking ahead to long-term and replacement costs related to the field project.

In all likelihood, trustees will pass a resolution at their Sept. 18 meeting, formally proposing the sale of the James Pond property, setting the wheels in motion for a public referendum in November.