Joined by Philipstown Supervisor Richard Shea, four members of the Cold Spring Village Board and two from the Historic District Review Board toured the interior of the old Butterfield Hospital on Wednesday (Sept. 12), stepping through thick piles of dust and debris and into a world frozen in 1993. 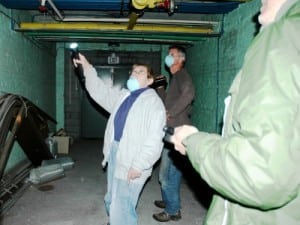 HDRB Member Carolyn Bachan and Mayor Seth Gallagher examine a ceiling on the lower level of the old hospital. Photo by L.S. Armstrong

Led by a representative of Butterfield Realty, the property owner, the approximately 90-minute tour, from basement to rooftop, revealed an institution seemingly abandoned in use. Rooms and hallways contain desks, chairs, telephones, computers, tools, sinks, shelves with file folders, medical equipment, books and instruction manuals, and more. Large washing machines, amazingly shiny and new-looking, still stand in a laundry area, and an apparent, body-size refrigeration unit remains in the old morgue. Floral curtains still hang on the walls in individual rooms, stairs still climb up and down, and clocks hanging on walls show different hours, as if each had kept ticking until its power source finally failed. A bathroom in a patient room contains small, inlaid green-and-white floor tile, in a pattern reminiscent of the 1920s or earlier.

But ceiling tiles and wires dangle, peeling plaster and paint hangs in strips, holes gape in walls, and ugly splotches, as if from mold or water, stain walls — among other obvious problems and deficiencies. 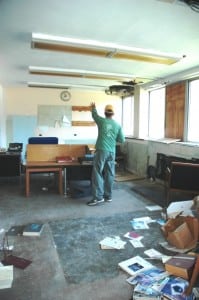 After the tour ended, Mayor Seth Gallagher and Trustees Matt Francisco and Bruce Campbell declined to make any official comments, though the mayor and HDRB Member Kathleen Foley argued about procedures for decision-making regarding the hospital.

“I just wish there were easier answers and easier ways to get to the end,” Trustee J. Ralph Falloon said ruefully, listening to the debate.

Supervisor Shea saw potential merit in saving the oldest part of the structure, built circa 1925. “This is living history here,” he said. “You don’t support your history if you tear it down. The whole idea of repurposing it is compelling — not the whole building. But there should be a hard look at saving the original [structure],” which might house a long-sought town senior-citizen center, he said.

Initially a stand-alone building, the oldest section was added onto around 1941 and subsumed by another expansion around 1963.