Cold Spring last week caught a glimpse of Main Street’s future appearance when consultants on a $1 million street-improvement project unveiled plans for improved sidewalks, curbs, and other road-related infrastructure at the village’s heart. 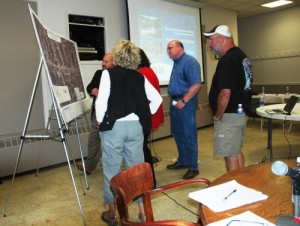 On the long-term agenda since 2005, when the U.S. Congress approved the bulk of the funding (with a smaller share coming from New York State and a bit from the village), the project officially got underway at a forum preceding the Village Board’s formal monthly meeting on Wednesday (Sept. 12). The total of $1,050,000 breaks down into two shares: $800,000 for the overall street and sidewalk upgrade and $250,000 for lighting and further sidewalk-related fixes.

Two representatives from CHA, an Albany-based consulting firm, presented basic concepts and then answered questions as members of the board and public gathered around aerial photographs of Main Street. In essence, the project covers the blocks between Route 9D (Morris Avenue-Chestnut Street) and the railroad tracks, with some spill-over work on adjacent streets, especially Furnace. Nonetheless, Mountain Avenue repairs also are involved.

The project is intended to address:

“I think the first priority is handicapped accessibility,” Mayor Seth Gallagher said in opening the discussion.

“This is actually required by law,” added Scott Lewendon, a CHA project manager. Enacted in 1990, the federal Americans with Disabilities Act (ADA) bans discrimination against the physically handicapped, including a denial of access to public services. Cold Spring’s sidewalks currently lack the curb cuts that allow wheelchairs to leave a sidewalk, cross a side street, and re-enter the sidewalk.

Safety improvements include such items as smoother sidewalks to minimize heaving and breakage of the concrete and new crosswalks at intersections, while fundamental infrastructure elements include road repairs, better curb alignments and drainage, and more. Tree planting and aesthetic improvements are also anticipated.

Joseph F. Cimino, CHA vice president, cautioned that the effort is “an enhancement project. There are some limitations given the scope of this project, in that it’s not a full reconstruction,” which would cost $5 million or more, he said. Nonetheless, according to Cimino, Furnace Street, one of the village’s original roads leading to the West Point Foundry, is slated for a “full-depth reconstruction,” including work to deal with problems of drainage. Mountain Avenue likewise is scheduled to receive more detailed attention.

Although the project deals with lighting improvements, Lewendon said it would not involve attempts to bury electrical and other utility lines, an idea often suggested in the village and raised at the forum by audience members. “This is basically out of the question” financially, he said. Lewendon cited costs not only to utility companies but to individual property owners, who pay for the lines running from their homes or stores to the common wires along the street. Cost constraints also decrease the chance of using porous materials to help handle water runoff, he said, responding to another question.

Trees generated interest, too. Lewendon said the goal is to plant trees that fit well in a street-sidewalk environment. “We try to use trees that are not great big, large oak trees [but] species that are more compatible with overhead wires,” he told the audience. Nonetheless, the trees cannot be expected to live long. “If you get 15 years out of street trees, you’re doing very well,” he said.

“In places where there are no wires overhead, we look at different trees,” with a longer lifespan and taller branches, the mayor added.

If all goes well with necessary higher-government approvals for the plans and other prerequisites, construction could begin next summer, Cimino said.

Meanwhile, Main Street will remain “as is.” Even with deficiencies, it has a lot going for it, Lewendon assured the Village Board and public: “You have a beautiful street, a wonderful street.”

During the Village Board meeting that followed the Main Street forum, held at the Cold Spring firehouse,Trustee J. Ralph Falloon raised a related issue — whether the village should revisit the possibility of metered parking. In 2009, the Village Board briefly entertained the notion of installing a state-of-the-art parking meter system.

Unlike the old method of supplying each parking space with its own parking meter — a device resembling a metal lollipop — the new systems use a single machine for a designated area, such as a block. The devices accept credit and debit cards as well as cash, run on solar power, and, in at least one version, issue a driver with a sticker to affix to a windshield interior announcing that the driver paid to park for a certain period of time. 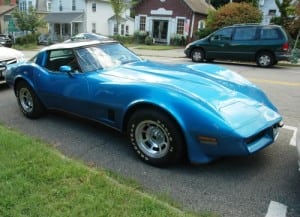 A 2008 study found the village could earn more than $180,000 yearly if it charged for convenient parking places, like those on Main Street. Photo by L.S. Armstrong

A 2008 study by a subcommittee of the Special Board for a Comprehensive Plan-Local Waterfront Revitalization Plan found the village could earn $180,000 or more annually from metered parking if it charged hourly rates of 50 cents on weekdays and $1 on weekends, between 11 a.m. and 8 p.m.

Falloon suggested that Cold Spring bring in an independent outside source to study the matter and restart the discussion, instead of using village personnel and residents.

Pointing to the 2008 Special Board review, the mayor responded that the village had already done much of the preliminary work required in opting for metered parking. “It’s more a question of whether you want to do it or not,” he said.