“Boxes are magical for me; they evoke memories and realize dreams, create fantasies and support causes through the use of the found object and handmade material. Boxes provide me with the means to explore the whole range of mediums. This is my life.”  — Barbara Perkins

For many artists, an opening reception of an exhibition of their work is an opportunity to bask in some kind of glory or, at the very least to come out of the solitary shell of studio life, gauging reactions and offering explanations.

Not so for Cold Spring’s Barbara Perkins. A solo exhibition of her work opens with a 4 p.m. reception this Sunday, Oct. 28 at Butterfield Library, where it will run through Nov. 26. But you won’t find Perkins front and center at the reception. There are a couple of reasons, the first being she doesn’t feel comfortable attending them. The second, equally important, is that she would rather that viewers of her intricate boxes and collages make their own suppositions as to the artist’s intent, and interpret them without being clued in on things like titles for the work. 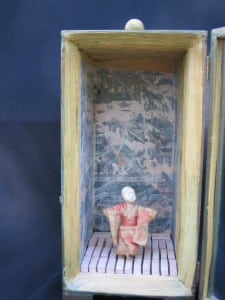 If an artist is uncomfortable with that kind of attention, how does she promote even the notion of any institution displaying her work? In Perkins’ case, true to form, she didn’t. She was more or less coaxed into it by Butterfield’s Luanne Morse, who was acting on a hunch.

Morse explained: “Barbara Perkins as far as artists go, is an interesting anomaly. While she has created her quite sophisticated boxes for many years and has work in private collections, she does not do the art-scene circuit as such. The show idea came up after I started talking to her at the library and simply went with a hunch that the library should show her artwork, because she is local and because it so so different from anything else I was seeing on the local scene. The current trend in the arts of having every media in huge impersonal spaces is another reason I initiated this particular show; we have such a wonderful venue in the library.”

Morse’s approach felt comfortable to the reluctant artist. “Luanne asked about putting things on display, and — at the time — it didn’t seem like a show,” said Perkins.

None of this is to imply that Perkins is not a committed artist. Far from it — she has been working for decades — not her first four, which she spent doing a collection of “real” jobs: running a marina on her native Long Island shore; becoming MetLife’s first female sales representative; working for a “little” newspaper, a law firm, a bank, and then in a long stint as a drug and alcohol counselor. She raised three children along the way, two of whom live nearby, with their families.

At age 39, Perkins went back to college to finish her degree, sidetracked earlier by going into business and having children. Attracted to art, she was intimidated by an early critique from an insensitive teacher, “Stick to stick figures.” Yet by her second semester, her professors were most encouraging, advising her to work in two-dimensional form and then to try sculpture. “I loved having my hand in things,” said Perkins, “clay, papier maches, stone. My joy is in working with the materials.”

It was then that Perkins discovered Joseph Cornell. Exhibition notes from the Peabody Essex Museum describe him in these terms:

“American artist Joseph Cornell (1903–1972) has been celebrated internationally for his boxes, collages, and films since the 1930s. His mining of far-flung ideas and traditions and elegant integration of woodworking, painting, papering, and drawing define the innovation and visual poetry associated with his work. … Although Cornell’s exploration of art, culture, and science was highly personal, even spiritual, his goal as an artist was to inspire others to pursue uplifting voyages into the imagination.” 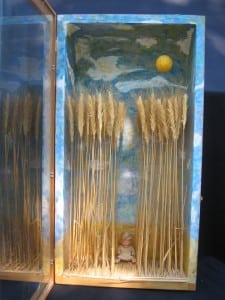 Enthralled, Perkins “wanted to be just like him. But my subject matter wasn’t magical, like his. I’m more down to earth. I copied him initially, but I made my objects more realistic.”

Now, Perkins finds her own subjects — often they find her, she says — and she tries to make most of the components in her boxes herself, down to firing tiny bricks, and using elements like screen mesh, sand and tissue-papered backgrounds, along with flowers and other things from nature. What appear to be waves of water is actually clay, fired and painted. Boxes range from tiny 4-by-4-inch constructions to larger sizes of 24-inches high and 6-inches deep.

Perkins says she works compulsively: “Sometimes I start with an idea; usually I see one thing and I don’t know what it is, but I know I should use it in a box. Even as I start going along, what I think it’s going to be is not what it turns out to be — and the ones that are, aren’t that good.”

The boxes are numbered, each given a random, odd number and are not titled. Perkins’ description of objects found within Box 13 have a sense of mystery and history about them: “We grew the rye ourselves; the doll is from Great-Uncle George’s house. His housekeeper had a daughter and he bought all these dolls for her.” Then again, she’d rather hold the details and let the viewer interpret the box.

Perkins moved to Cold Spring in 1997, following one of her daughters, who had “found it.” Before the move, she had been living on a farm, inherited from her father, in Columbia County. Knowing nothing about farming, almost accidentally she turned it into a flower farm, growing acres of blooms, making topiaries. In Cold Spring she found studio space at what later became the Collaborative Concepts space on Peekskill Road. Her children and many grandchildren “have always been supportive of my work” and are “thrilled” at this exhibition — they absolutely love the boxes.”

There will be 28 pieces on display in the exhibition; boxes and collages. Some are loaned from the private collections (in the U.S. and in Italy) where most of Perkins’ work is retained. Many of the boxes at the exhibition are for sale. Visit butterfieldlibrary.org for library hours.