On the evening of Wednesday, Nov. 28, the first meeting of the Garrison Union Free School Board of Education since holding three public workshops on the board’s goals for the year, members approved the state-mandated Annual Professional Performance Review (APPR) plan for evaluation of teachers and the principal. Then, during the discussion portion of the meeting, which lasted over an hour, the board commented on and discussed next steps to write its goals for the year after having received input from the public, especially that from the largely critical, final workshop on Tuesday, Nov. 13. 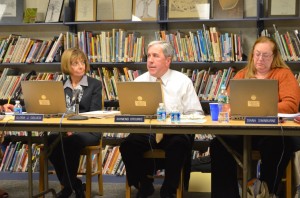 School Board President Raymond O’Rourke prefaced the discussion by explaining that they would focus on the board members’ comments on the goals, informed by discussion from the three workshops, to facilitate Superintendent Gloria Colucci’s drafting of the new goals.

Many board members echoed statements from the workshops that the current goals (which can be seen at the school’s website, gufs.org) were good, but that in light of some parents’ concerns, the specific objectives could be reworked to help meet those goals. Professional development for the teachers was discussed as an important component of meeting the goals.

In addition, Board Member Anita Prentice volunteered to write a vision statement that would be briefer and more succinct than a mission statement, which could encapsulate the values that the school community holds and has communicated in the workshops.

O’Rourke and other members communicated their desire to sympathize with and validate the statements of the parents who, at the Nov. 13 workshop, expressed dissatisfaction — particularly with a perceived absence of differentiated instruction (teaching and providing work to students at their individual ability levels) at the school. While O’Rourke stated that the district has a responsibility to those students whose parents said did not experience differentiated instruction, he also noted that the workshop had been attended by a self-selected sample of parents and that a “lack of differentiated learning is not a defining characteristic of the district.”

Some others agreed, arguing that many parents are satisfied with the school and do not attend the meetings. Parent Kym August compiled comments from parents she had surveyed over email and brought a two-paged document expressing gratitude to the school, which was then copied and disseminated to those at the meeting.

Many parents quoted in the document praised the board, teachers, administrators and staff and said that their students have enjoyed going to the school and have learned a lot. Many teachers and aides, including Mrs. Waters, Mrs. Dodge, Mrs. Karp, Mrs. D’Onofrio, Mrs. Khuns, Mr. Williams, Mrs. King, Mrs. Martini, and Mrs. Ricci were mentioned for their encouragement of students and special help.

Board members who had not attended the last workshop, James Cannon and Diana Swinburne, defended the school in their comments. Cannon stated that, contrary to the experience reported by a parent that her children were not well prepared for high school, his children had all excelled with the preparation provided by Garrison School. Swinburne stressed the school’s status as a National Blue Ribbon School (named in 2010) and a New York State Reward School (and as one of the highest performing in the state), adding that test scores may not be important to parents now, but they would quickly become important if they were not as high as they currently are.

O’Rourke later added that, although the group of over 20 parents at the last workshop were a self-selected sample, it is usually a small group like theirs that forms a vanguard to create important changes.

A few of the parents who have attended the workshops were present at the Wednesday meeting and asked if a task force or committee would be looking into programs at other highly successful public schools, as they had requested at the last workshop. O’Rourke said he would not recommend forming another group while a group currently exists to oversee curriculum — the education committee, which has consisted of parents and administrators.

Parent Derek DuBois, who had presented at the last workshop, said over 12 teachers were at the education meeting earlier that afternoon, and Board Member Theresa Orlandi said she was thrilled to see so many teachers getting involved. DuBois agreed with Board Member Christine Foertsch’s desire for the administrators to create a wish list — ignoring budget constraints — and trying to find the funds for particular initiatives to fulfill the wish list.

DuBois proposed that they 1) survey all the teachers to see what they need and want, 2) research innovations at other successful public schools, 3) present what they would like to implement at the school, and then 4) raise the money, possibly through the Garrison Children’s Education Fund and the Parent-Teacher Association to fund those initiatives.

Parent David Gelber suggested, to increase parent involvement, that the school provide childcare during the board meetings, possibly across the street at St. Philip’s. PTA member August said that they offer childcare during PTA meetings but that this did not increase attendance. Gelber responded that he knew of one parent who would’ve been there if childcare were available. Board members said they could try it in the future.

Obstacles to the ideal

Colucci added, however, that the ideals are always affected by external factors, such as state mandates and the budget. Teaching has become more difficult with the APPR causing fear in teachers that if their students don’t perform well on tests, their jobs will be on the line. This makes reaching their ideals much more difficult.

Prentice commented that the state assessments are not at all differentiated, and those results now constitute part of teacher evaluation (20 percent, as mandated by recent state law). She hopes to present material at the next board meeting on a seminar that she and Colucci had attended on standardized testing and the negative effects on education. Orlandi commented that through the APPR and state assessments, the state was micromanaging districts and that an advocacy group should be formed to oppose such policies.

In other news, Colucci reported that the district has removed boulders, twice in the last few weeks, that were placed by residents to block access to the school forest from Route 403. The road is supposed to be open to hikers in the school forest as well as to emergency vehicles attempting to reach the school. For this reason, the district has communicated with law enforcement entities and will contact the residents again about keeping the path clear.