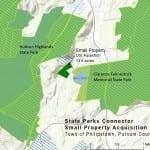 The acquisition of the two parcels, which are located on Jaycox Road in Philipstown, Putnam County, builds on the goal to create a hiking corridor between Fahnestock and Hudson Highlands — parks to which OSI has added thousands of acres over the past three decades.

“OSI has added nearly 7,000 acres to Fahnestock State Park — more than doubling its size — and we’ve added close to 1,500 acres to Hudson Highlands,” said Kim Elliman, OSI’s president and CEO. “It has been a longtime goal to link these two state parks, and the public is now one step closer to being able to hike from the Hudson River to the Appalachian Trail entirely on publicly accessible property.”

The parcels were acquired by OSI’s land acquisition affiliate, the Open Space Conservancy, and are adjacent to a 50-acre property recently acquired by the Hudson Highlands Land Trust. That parcel, which is also part of the envisioned hiking corridor, will be added to Fahnestock State Park.

“Both OSI and HHLT have been working together on this hiking corridor for many years, so we’re pleased that our partnership has resulted in these important acquisitions, furthering the original vision to connect the two parks,” said Andy Chmar, the executive director of the Hudson Highlands Land Trust.

OSI intends to transfer the land acquired today to the New York State Office of Parks, Recreation and Historic Preservation as an addition to Fahnestock as well.

The land acquisition is one part of OSI’s vision for enhancing Fahnestock State Park. OSI’s Alliance for New York State Parks program is also raising funds to restore and upgrade the popular recreation area at Fahnestock’s Canopus Lake, and phase one work is underway to improve and modernize the Canopus Lake visitor welcome center.

The year-round complex, including a bathhouse, café area and cross-country ski center, is worn, cramped and severely outdated. So far, the Alliance has secured more than $800,000 through lead gifts, in-kind contributions and a state Environmental Protection Fund grant toward the $1.2 million project.

In addition to making energy-efficient and sustainable improvements to the public space, later phases of the Alliance’s work at Fahnestock will naturalize the beach setting, improve the swimming area and add needed recreational features.

“The mission of the Alliance is to build a better park experience,” said Erik Kulleseid, the executive director of the Alliance for New York State Parks. “Coupled with today’s acquisition, this restoration project builds on OSI’s significant commitment to this landscape and will help restore this park to its fullest potential.”

The Open Space Institute protects scenic, natural and historic landscapes to provide public enjoyment, conserve habitat and sustain communities. OSI has protected more than 116,000 acres in New York state. Through its Northern Forest Protection Fund and Conservation Capital Program, OSI has assisted in the protection of an additional 2.2 million acres from Quebec to Georgia. Please visit osiny.org for more information.