Election-reform activists Saturday, Feb. 2, urged state funding for candidates and tighter donation rules to decrease the dominance of big money in New York politics and the spin-off effect of paid lobbyists monopolizing the time, attention and agenda of those elected.

A panel organized by state Assemblywoman Sandy Galef advocated a two-prong approach to improve the state’s elections and governance. Held at the Desmond-Fish Library, Garrison, the panel presentation, Campaign Finance Reform: Time for a Change, followed a morning question-and-answer forum with Galef that ended in the arrest of a heckler whose conduct became disruptive. [See Croton Man Arrested at Galef Town Meeting After Disruptive Conduct.]

Making improvements won’t be easy but is do-able, the three reform experts said, citing experience from New York City, with its own campaign-finance provisions, and other states. 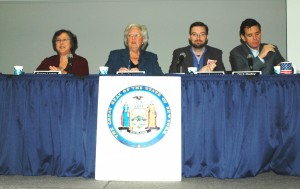 Susan Lerner, executive director of Common Cause NY, said money-saturated politics “is one of the basic challenges we face,” with a need to make the electoral system “open and fair and have it be responsive” to the vast majority of voters, not merely the wealthy or well-heeled corporations, businesses, and special-interest groups. She pointed to cynicism about government and “the public perception that Albany is for sale” or that “decisions in Albany are based more on special interests and money” and “less based on what is the best policy for all New Yorkers.”

Under New York state law, “we have sky-high limits” on the amount of money that can be donated and “have very lax controls,” Lerner said. She proposed lowering the limits on allowable donations and instituting “public financing” of elections, in which a state coffer dispenses money to eligible candidates for campaign expenses.

Under a New York State Assembly bill introduced in 2012, the coffer would be fed by an income tax check-off of $5 and by a 10 percent surcharge on “recoveries for fraudulent practices relating to stocks, bonds,” and similar securities; if insufficient revenue comes from those first two sources, the coffer could draw on the state general fund for support.

“We all agree there’s a big problem with money in politics,” said another panelist, Jesse Laymon, the downstate campaigns manager for Citizen Action of New York. “But what is it about the money in politics that is so corrosive?” He mentioned issues of access and distortion of political decision-making processes. According to Laymon, most money for campaigns comes from a tiny percentage of the population. “That’s going to have an effect on whom the candidates are interacting with” and skew the perceptions of those same candidates once they’re in office, he said.

Dadey, a former lobbyist, said that as part of his old job he routinely attended events at Albany hotels in the evening, going “from room to room to room” of receptions and parties with politicians and lobbyists and very few members of the general public, a system that bothers even those caught up in it. “It makes the lobbyists uncomfortable. It makes the elected officials uncomfortable,” he said.

Galef said that while she had never had such a fundraiser in Albany, she knows they occur, often several a day, starting with breakfasts. Typically, the busiest period coincides with the months when key legislation, including the state budget, is being drafted, she said. “You just see the money flow.”

“We want legislators to be free to spend time with ordinary people in their districts,” Laymon told the audience of about two dozen. “We want the people who finance campaigns to be the voters.”

Dadey pointed to one (perhaps unexpected) byproduct of current practices: “It’s a lot easier to get checks from lobbyists because it takes less time” than seeking donations from a variety of sources, so elected officials can actually end up with more time for constituents. Not that they always use it. Dadey also mentioned elected officials in New York City — which enacted citywide reforms — who lost decisively once public funding of campaigns existed. “Public financing increases the number of candidates running,” which invigorates the electoral process, Dadey explained. He observed that 35 percent of incumbents in the New York State Legislature did not face opponents in recent elections.

Dadey also argued that any tightening of funding rules must apply to money from PACs (political action committees) and super-PACs that are ostensibly separate from a candidate’s campaign but often operate as one with it. Laymon urged that tighter rules likewise take in LLCs — or Limited Liability Companies — a form of business that can often avoid constraints applicable to other enterprises.

State Sen. Terry Gipson, like Galef a Democrat, was not on the panel but gave his own perspectives, from the floor. “This is really an important issue,” Gipson said. “I really believe we’re at a severe disadvantage in this state because we’re denying some of the brightest and best” an opportunity to run for office, given the often astronomical costs of campaigns. Gipson repeated a question he received during a visit with a Cub Scout troop: “Can you run for office if you’re poor?” The answer, of course, he said, is that no law bars a poor man or woman from running, “but the reality is that you’ll get nowhere.”

Lerner expressed optimism the state might implement changes in the not-too-distant future. “I think we have a good chance” in the state Assembly to pass legislation this year, she said, though that still leaves the state Senate to get on board. She advocated strong citizen involvement, to convince the legislature to act.

Dadey said some elected officials “support public financing of elections in concept but fear it” in private.

“We have to convince our colleagues that, yes, we might lose a little bit on it” but overall, everyone in the state will gain, Galef suggested.

“There will still be an incumbency advantage, but it balances our system,” Lerner said.

A woman in the audience, who spent much of the meeting holding up an anti-abortion sign, complained about labor union money in elections and alleged that “you [the reformers] don’t put the unions in the same category as you put the super-PACs.” She also claimed Galef gets substantial support from Planned Parenthood and asserted to the assemblywoman: “This campaign finance reform is not going to touch you in the least.”

Dadey responded that real reform would cover all players and institutions.