During a recent weekday lunch hour at the Garrison Institute, retreat-goers milled quietly in the dining hall, gathering their plates and helping themselves to an elegantly arranged buffet of mozzarella panini, white bean and celery salad and other farm-fresh offerings. Making their way to the hall’s artisan-crafted banquet tables, they sat and savored, but there was no verbal gushing about the sublime menu. This was Day 5 of a silent retreat called Jesus — The Teachings of a Revolutionary Mystic. Just weeks earlier, another gathering was held, called The Climate, Cities and Behavior Symposium. In that case, as with many of the retreats at the Garrison Institute, communication — verbal, aloud and passionate, was very much a part of it. 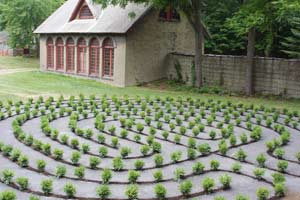 These gatherings serve as examples of the diversity in contemplative-practice programming that the Garrison Institute has offered over the past decade. The fact that this “monastery for the 21st century,” as its founders have referred to it, is thriving on the occasion of its 10th anniversary is cause for celebration. On April 9, a Gala Dinner will be held at the Pierre Hotel in Manhattan, hosted and co-chaired by Garrison Institute Spiritual Advisor Galek Rimpoche and actor-activist Richard Gere. A keynote speaker for that event will be author and environmentalist Paul Hawken.

When the Garrison Institute began in 2003, it did not have the luxury of growing slowly into its role as a retreat center with an international profile. Within months of hosting its first retreat, there was a historic visit by the Dalai Lama, appearing there to address a conference of teachers from Tibetan Buddhist Dharma Centers in the Americas. All of this happened before the Garrison Institute was even able to hold its own opening ceremony. In the ensuing years, the retreat center has hosted countless spiritual leaders, artists and environmental activists, all within the framework of “applying the power of contemplation to today’s pressing social and environmental concerns, helping build a more resilient and compassionate future,” according to its mission statement.

“I think you can attribute that to the strength of the founder’s vision for what the institute could offer the world,” said Robyn Brentano, director of the Garrison Institute. She was referring to the pace and momentum of events in those early days, a byproduct of the determined spirit of Jonathan and Diana Rose, who founded the Garrison Institute. 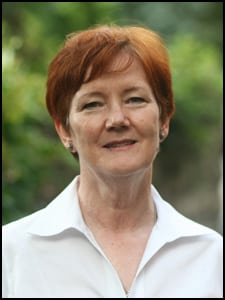 Aside from the founders and their commitment to develop a thriving center for contemplative practice, the Garrison Institute also has three spiritual advisors, all of who joined on Day 1. Along with the spiritual value they brought as evidenced by the diversity of their backgrounds, the advisors collectively stressed the importance of using science as framework for the teachings of the institute. “They knew that by doing so, contemporary society could begin to understand the value of contemplative practice,” said Brentano. Those three spiritual advisors, Rinpoche (who is the co-chair of the April 9 event), Rabbi Zalman Schacter and Father Thomas Keating, have been consistently engaged in the programming of the institute and remain so to this day.

According to Brentano, it is especially significant that the teachings and contemplative practices of the institute have resulted in real world applications. “One of the seminal programs that was developed here under our Transforming Trauma Initiative is the Domestic Violence Shelter Workers Program. This is for people employed in domestic violence shelters, experiencing vicarious trauma due to the nature of their work. It is known that shelter staffers internalize their experiences. This program was designed to help them use contemplative practices to free them from that stress-producing reactive pattern that they get caught in,” she said.

The Garrison Institute is housed on the scenic riverfront land known as Glenclyffe. The grounds are rife with lore and legend dating back to the Revolutionary War. There is even, somewhere in this land’s buried history, a fleeting association with Benedict Arnold. The parcel is actually under the auspices of the Open Space Institute, the not-for-profit group that has long been committed to keeping the property out of the hands of developers. Before the Open Space Institute or the Garrison Institute was associated with the land and building, it was a monastery that served as home to the Capuchin Friars. With a time span of only three decades since the departure of that religious order, you don’t have to go far in Philipstown to encounter someone who has memories of the Capuchin days and the friars’ contribution to the community. “I remember that in the ’80s, they were kind enough to let the younger basketball team practice in their gym when the two gyms at Haldane were full,” said former Haldane pupil and current Cold Spring Mayor Ralph Falloon. 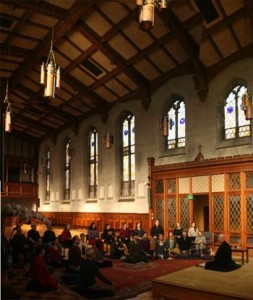 It is a practice of the Garrison Institute and a condition of the Open Space Institute that the grounds remain accessible to the community. For those longtime local residents who might be sentimental about the days of the Capuchin monastery, they would be heartened to see that not much has changed, right down to the occasional remaining example of Christian iconography, some of which was spared at the suggestion of someone with no small amount of influence: “There’s a very sweet story about the Dalai Lama coming here and responding to a passing comment about possibly removing the cross that crowns the main entrance of the building. He said, ‘No, no, don’t remove that. Let it stay to honor what the Capuchin community meant,’” said Brentano.

But the past informs the present in ways other than physical, according to Brentano. “This building is redolent with the sense that the people once living here dedicated themselves to a contemplative life. The fact that the Capuchin community existed here once makes this building very relatable to the people who come here now.”

Aside from the Gala Dinner of April 9, there will be other events to mark the 10th anniversary as the year unfolds, some of it with a local focus. “We’re talking about a program for the local community, something I think is very important,” said Brentano, referring to discussions that have taken place between institute programmers and their local advisory group.

But local residents can take advantage of Garrison Institute offerings without the time or financial commitments that a full retreat would require, although all are encouraged to explore the institute website for retreats that might be a good fit. On an ongoing basis on most Wednesday mornings, there is a free meditation session open to all. Additionally, local tai chi instructor Teresa Peppard leads a low-cost session on most Thursday mornings. These are just two examples of programming offered to locals who might want to participate in the Garrison Institute, both of which are on a drop-in basis.

Brentano offered a glimpse of what’s in store for the future. “We’re building hubs in other locations as part of our Climate, Mind and Behavior program. We have five or six other cities now, with people who have attended gatherings here and have since gone on to implement these practices elsewhere, while still working within the overall initiative. So we’re building these networks. In the digital age that’s how you create impact,” she said, while stressing an ongoing commitment to the institute’s mission of using contemplative practice to build a more resilient and compassionate future.

The Garrison Institute is located at Glenclyffe, 14 Mary’s Way, Route 9D in Garrison. Details and tickets for the April 9 Gala Dinner are available at garrisoninstitute.org.