Village Board backs move, with caveats

Philipstown officials last week took up the cause of revenue sharing, calling on Putnam County to give municipalities some of its sales tax intake, since the tax originates locally. 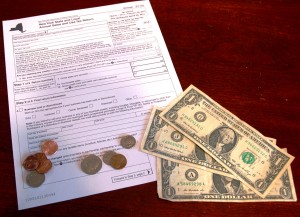 Local businesses must collect sales tax, which goes to the state and county; Philipstown officials want Putnam County to share some of its total sales tax intake with towns and villages. Photo by L.S. Armstrong

At a workshop Wednesday night (April 10), the five-member Town Board unanimously passed a resolution that urges the county to begin “equitable sharing of sales tax revenue with local municipalities.” The measure likewise authorizes Supervisor Richard Shea to prepare a written proposal, to send to Carmel, for establishing a county program for sharing sales tax income.

A survey of county practices listed in the comptroller’s report indicates that rarely does a county peg the level of sales tax returned to a municipality to the amount of sales tax collected in that municipality. Typically, counties base sales-tax sharing on population or property taxes.

Counties that split sales tax revenue with municipalities do so in various ways. For example, in 2010, Orange County kept 73.6 percent of its portion and gave 26.4 percent to its cities, towns and villages, generally on the basis of population. Westchester County retained some of its county share for itself and distributed the rest to towns, villages and school districts on the basis of population.

Town Board members said Philipstown has requested sales-tax sharing for a dozen years or more.

“The county is experiencing a real boom in sales tax revenue. Last year was a record year, and this year so far they’re setting record amounts every month,” Shea said. According to the supervisor, Putnam County sales tax revenue now exceeds what the county anticipated for that income stream when it set its budget.

“I don’t think it’s unreasonable to say that as one of the municipalities that creates this revenue, that once the county hits that revenue mark they start returning a portion of that to the town. Even if it were just a percentage of that overage” it would help, he told the board. “Anything we can get we desperately need.”

“My perception, at a glance, is that we’re subsidizing programs in other towns, programs that we don’t have here,” said Councilor Nancy Montgomery.

“We’ve felt that way for a long time, and nobody has proved us wrong on that,” Shea concurred.

Town Board members were uncertain how much sales tax Philipstown generates annually, giving $2.5 million as a possibility. When asked for town-by-town breakdown, county officials “generally say, ‘No, we can’t give it to you; we don’t do it like that,’” Shea said. “But there’s got to be a way to figure it out.”

The Town Board had alerted the Cold Spring government of plans to take up the sales tax issue and a day before the Town Board vote, the Village Board briefly considered the matter.

“I support the town,” said Mayor Ralph Falloon. “And I support revenue sharing.” However, he pointed to the lack of data. “One of the problems is we don’t know exactly what portion we actually give to the county.” In other municipalities, a store like a Home Depot or an auto dealership will generate “a tremendous” amount compared to a Cold Spring shop, Falloon said.

“I think we should be interested in revenue sharing. But we need to be cognizant of how much we’re actually entitled to,” he cautioned. “I think we should definitely support the town but at the same time realize that we don’t want to get into this huge brawl with the county if our share isn’t what we passionately think it should be.”

Trustee Bruce Campbell predicted that having built sales tax revenue into its budget, the county will be reluctant to relinquish any of it. Nonetheless, he said, “no matter what we do as a village, or with the town, it is only going to make the conversation happen faster.”

The Village Board informally agreed to pursue the question, seeking more information, and keep communication with the county open. As Falloon put it, “maybe there’s some inter-municipality sharing that we can get in lieu of” sales tax revenue.