In an acknowledgement that personal objects or possessions connected to major world events or movements can sometimes produce the most visceral response, the Putnam History Museum’s (PHM) new exhibit, Remembering War, 1775 to the Present, displays the major U.S. conflicts of the past three centuries largely through the prism of local personal experience. The exhibition, which opened last Friday, May 3, will run through mid-November and takes visitors on a reverse-order trajectory from recent conflicts back through the Revolutionary War. 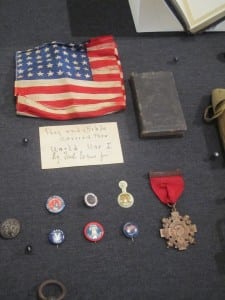 Display including flag and Bible carried during WWI by Fred Evans Jr.

Curated by Trudie Grace, the exhibit was initially conceived on a much smaller scale, using solely objects from the PHM’s own collection. Grace quickly realized she needed to supplement this with materials from the community. At that point, the exhibit grew “because it needed to grow,” said Grace.

Her outreach began with community member Mark Forlow, who had contributed to previous exhibits at the museum and had an extensive collection of military objects and paraphernalia.

Grace then found Stanley White, now retired, who makes models, and restores antique aircraft, amongst other things. White learned to fly at Stormville Airport and joined the Air Force during the Korean War. The curator of the Air Combat Museum at the Old Orchard Airpark in Modena, N.Y., he stores his models of aircraft, artillery and more in a hangar there. He “brought in many items of significance,” Grace said.

The exhibit includes uniforms, equipment, medals, personal items, posters and town and county documents relating to enlisting and other aspects of service. The wars of the 18th and 19th centuries are represented largely by artwork from the PHM’s collection. 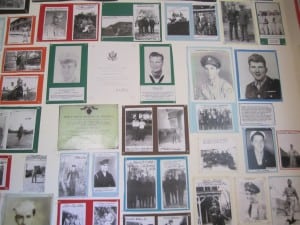 The wall filled with WWII scrapbook and photo album memorabilia from local veterans and their families.

Highlights, traveling through the exhibit, include a display of photographs relating to U.S. Army 1st Lt. David Keppel’s service in Bosnia and Hungary — the most recent conflict included. 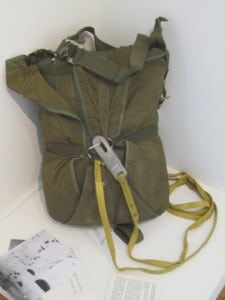 Two paintings by Garrison’s Sheilah Rechtschaffer made in response to the war’s effect on Vietnam, as well as a painting by Cold Spring’s George Stephenson depicting his experience in Vietnam during a helicopter bombing with people lying dead on the ground, share space with a Vietnam-era parachute donated by White and a fighter pilot helmet of similar vintage, contributed by Richard Saunders. A photo taken in Vietnam in August 1969 shows Cold Spring’s Ralph Garrison with Sgt. Maj. Joseph Daily of the Marine Corps. A display case of medals and pins circa 1967-70 belonging to Lt. Roger Keppel includes a Purple Heart and Bronze Star.

Advancing through the first room, one moves back in time to WWII, which provides the majority of the exhibit’s objects. A collection of Forlow’s badges and insignia used by the U.S. Army Air Corps can be found near steel-shell casing from German 88 mm guns, also donated by Forlow. These rest adjacent to a large model of a tank landing ship, an assault ship used for landing tanks on shores, handmade by White. Women in WWII are represented by the late Wetona “Toni” Bernier’s WAVES (Women Accepted for Volunteer Emergency Service) uniform.

Troops from this area who signed up for World War I service are listed on the panels of the Militia Enrollment List, contributed by Putnam County historian Sally Sypher, which notes occupations of the enlisted men, some of which are given as “feed business,” “brakeman,” “dairy farmer” and “telegrapher.” WWI Navy recruiting posters fill the walls near a display table that includes more personal objects from the era, including a poignant “flag and Bible carried through WWI by Fred Evan Jr.,” along with a bandolier for a repeating rifle. A Presbyterian Church Honor Roll provides a “Record of Our Men Who Have Enlisted.” 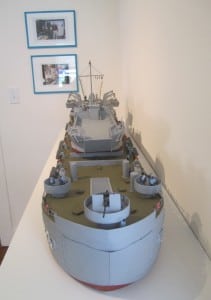 The Civil War is represented by an engraving of President Lincoln, as well as 1923 demit papers from the United Daughters of the Confederacy, certifying the woman resigning as a “member in good standing.” There is also a collection of small brass and wood replicas of cannons, rifles and a howitzer, made by White.

Oil paintings, pencil drawings and engravings, some related to the capture of British officer Maj. John Andre, others showing George Washington’s headquarters, constitute a good portion of the Revolutionary War section, together with a recently donated portrait of Francis Lewis, a signer of the Declaration of Independence. There are even Washington andirons on display.

The PHM is encouraging visitors to share their memories of wartime and information about memorabilia they may have. There is a box near the museum’s entrance where these contributions can be made. 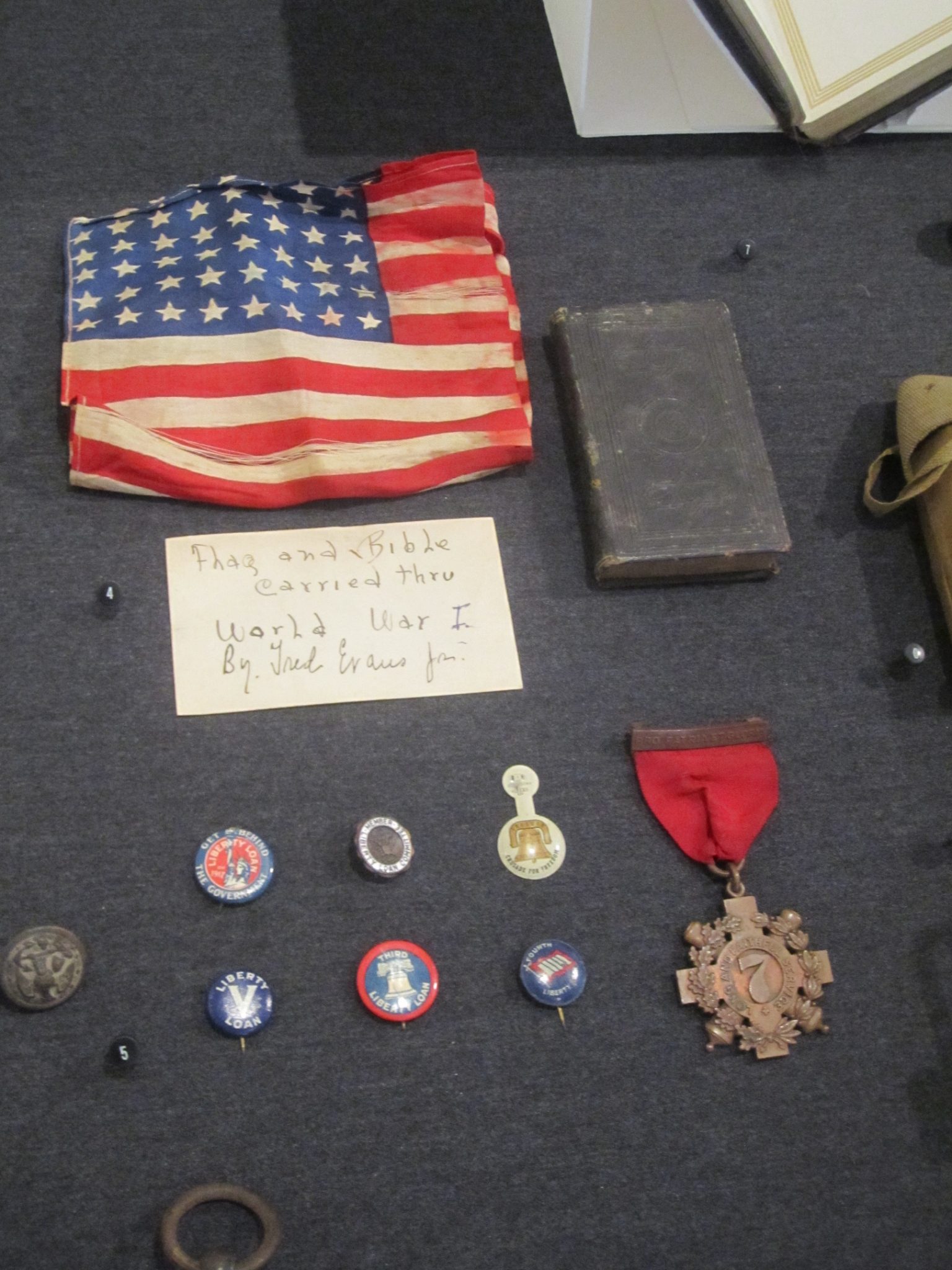 Display including flag and Bible carried during WWI by Fred Evans Jr. WWI Honor Roll, a record of the men who enlisted. 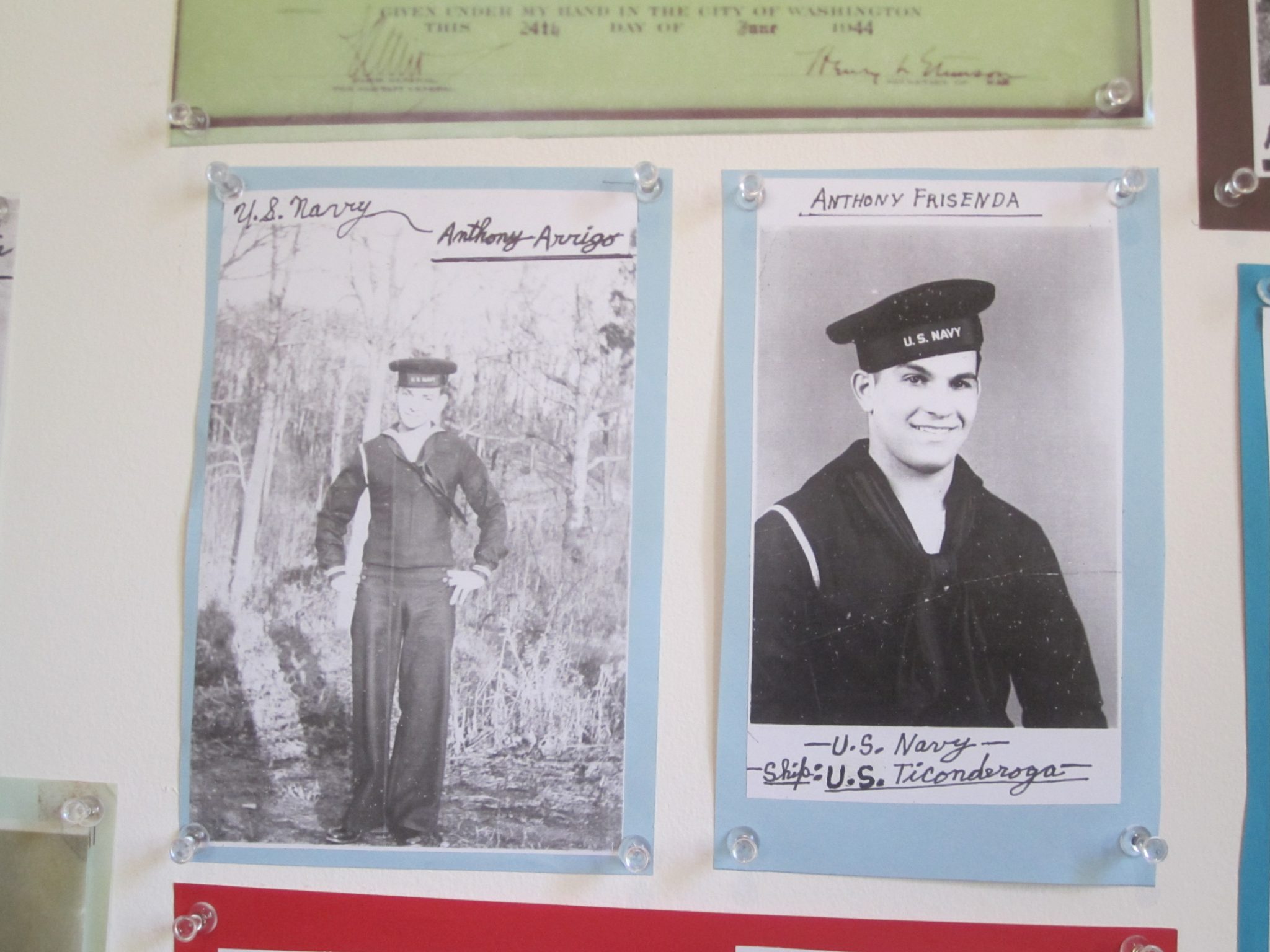 WWII photos of Anthony Frisenda in his Navy uniform, part of display. 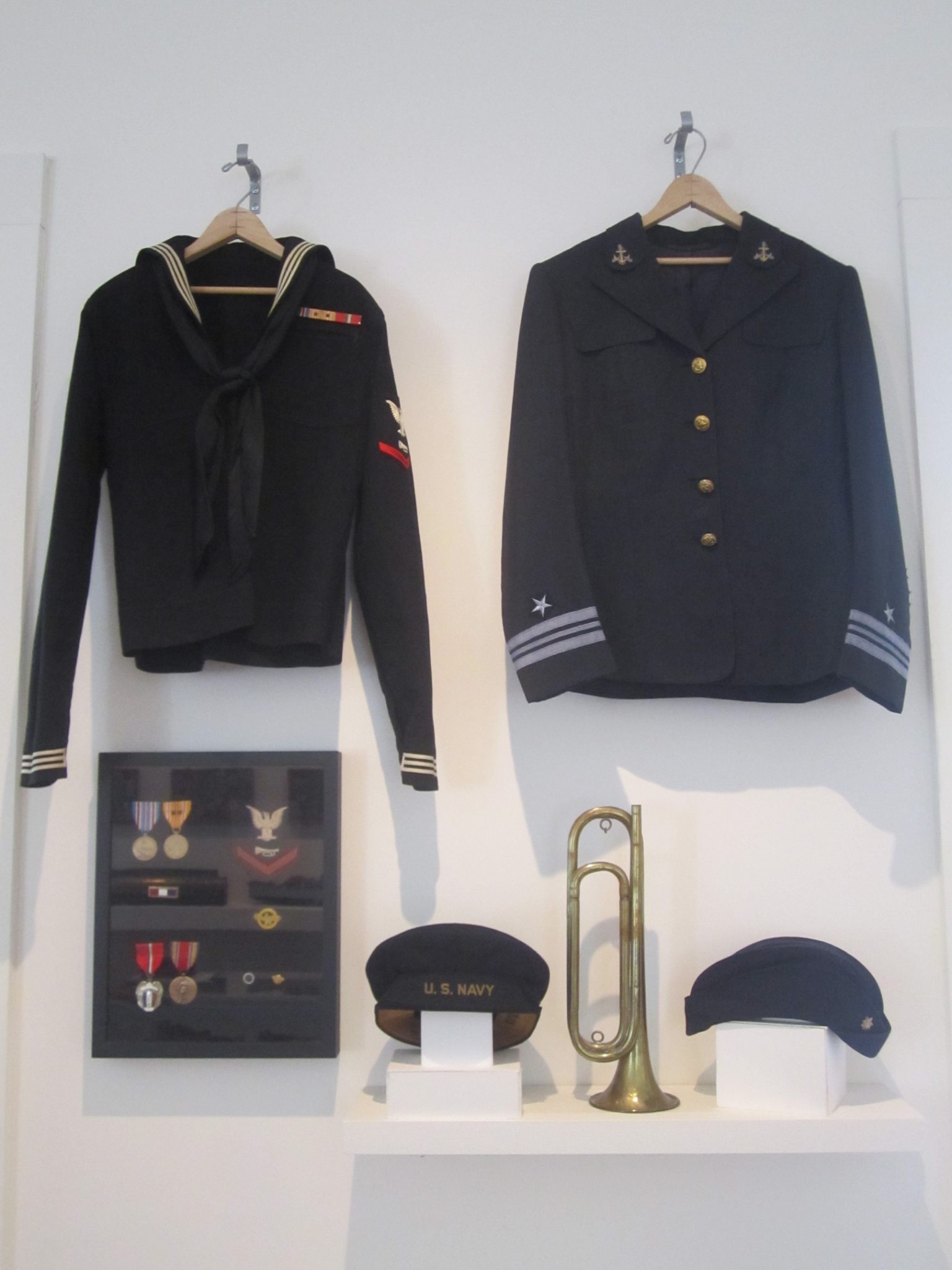 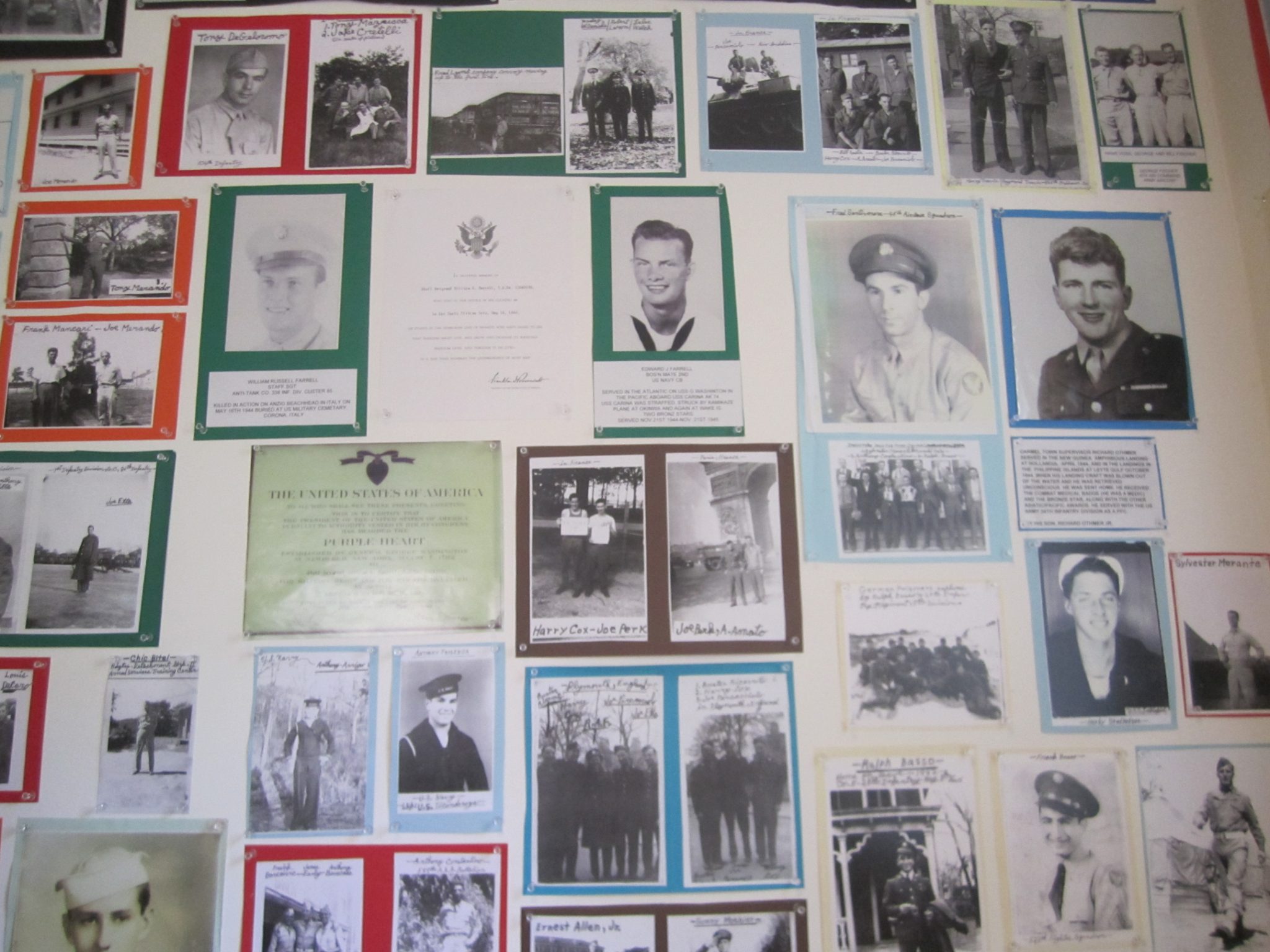 The wall filled with WWII scrapbook and photo album memorabilia from local veterans and their families.