Will Hembree is a man of many adventures. He has just embarked on his latest and greatest, a 2,473-mile kayaking expedition, covering rivers and inland waterways from New York to Oklahoma.

Launching from Cold Spring on May 6, he began his journey traveling north on the Hudson. He will cross the Erie Canal into Lake Erie, paddling to Toledo. Then, briefly landlocked, he will travel by car (albeit a Toledo Kayak Club member’s car) to Lake Michigan, where the water journey begins again, down the Illinois River to St. Louis, where he will switch to the Mississippi. 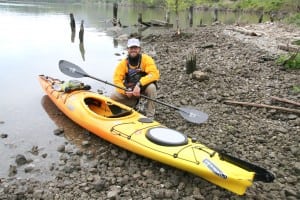 Heading down past Memphis, he will cross to the White River in Arkansas, meeting up with the Arkansas River, all the way across to Oklahoma, where he will take the Grand River system before ending his trek at the Great Lake of the Cherokees in northeast Oklahoma, where he is from. He expects that it will take him about 100 days of paddling, which translates into about four full months.

Aside from his kayak and basic provisions, he will be bringing along a camera, because the purpose of the trip is to compile a documentary video portrait on life in America, tackling such questions as “What do you feel is the most valuable thing in your life?” and “What’s the most adventurous thing you’ve done or want to do?” It is Hembree’s hope that an unscientific but diverse sampling of respondents, from joggers to office professionals, the homeless and kids, all of whom he expects to encounter en route, will help him answer the question, “Can you get away with less and still have a good life?”

The original impetus for the trip was a simple one: He hadn’t seen his family in quite some time and lacked the money to fly there. As a joke, he said he should try paddling to Oklahoma, and the joke stuck. Once he determined that he would do actually do it, he spent two months chart-plotting his trip with maps, then set out to find sponsors who would donate equipment or discounted goods and kayak clubs to interact with throughout the voyage. Right off the bat, Jackson Kayaks provided him with two whitewater kayaks and Richardsons’ Maptech donated all the river charts he needed. Altogether he got a much bigger response than he’d hoped for as “pretty much an unknown kayaker.” 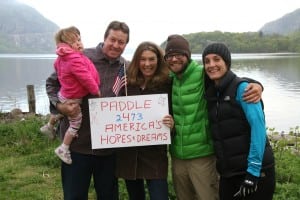 Cassidy, left, John and Alyssa Ossenkop and Laura Brackley flank Will Hembree in the green jacket just before he departed.

This is the latest in a long string of adventures that eventually brought Hembree to Cold Spring, where he has been living for the past two and a half years — “the longest I’ve lived anywhere,” he said. Prior to landing in the Hudson Valley, after doing a language exchange program in Germany, he spent seven years studying, working and adventuring in Italy.

A Roman history buff, he hiked the Via Appia Antica, starting in Igoumanitsa, Greece — a port of call for the Roman military — crossing to Brindisi, Italy, and walking the first paved road to Rome — a solid month and a half of backpacking, ending at the Roman Forum. He’s also hiked the Camino Santiago on Spain’s north coast, traveled by bicycle through Italy, France, Spain and Morocco and cycled the entire coastline of Croatia. “I thoroughly enjoy any self-powered adventure,” he said.

Hembree doesn’t slack off in winter, either, doing backcountry skiing. During his time in this area he has worked at Hudson Valley Outfitters as well as at West Point, at the Morale Wellness Recreation Center, as a certified ski instructor teaching everyone from military families with kids to retired veterans. He has also taught fly-fishing to kids at Department of Environmental Conservation Camp Colby at Saranac Lake. 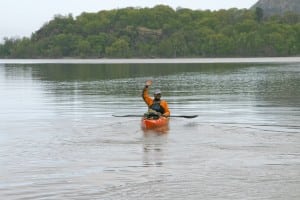 Will Hembree waves goodbye to a crowd in Cold Spring on May 6.

He and his traveling partner, John Cipollina, a teacher and outdoor educator, have chosen this route in hopes of “bringing back to life the adventurous, pioneering spirit that helped create this country.” (Cipollina will join up in Erie because of job commitments during the first month of the trip.)

At the end of this journey, after editing the documentary with the help of an expert friend, Hembree intends to present it next winter at Paddlesport 2014, the largest event of its kind in the eastern U.S., and at the next Paddle for the Cure Cold-Spring-to-Peekskill regatta. He also plans on giving a talk at Butterfield Library, where his journey will be followed via a poster pinpointing where he is at any given point. He then hopes to embark on his next adventure, aiming to combine another journey with fundraising, this time on behalf of Alzheimer’s research. Using the documentary as a resume of sorts, his real aim is to string together a series of journeys, all in support of charities.