Project will continue to revitalize the Poughkeepsie waterfront

“We’re excited that work is getting underway on this new feature of Walkway Over the Hudson State Historic Park,” State Parks Commissioner Rose Harvey said. “The elevator will help encourage the Walkway’s thousands of visitors to further explore and enjoy the Mid-Hudson Valley’s beautiful network of parks, trails and waterfront.” 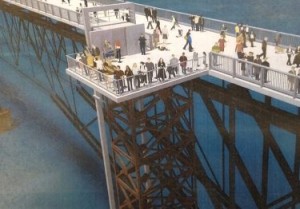 The proposed elevator at the walkway

The approximately $2.8 million project will provide a direct connection from the elevated park to the Poughkeepsie waterfront, including Waryas Park and soon-to-be-created Upper Landing Park; facilitate tourism by providing more direct access to the Poughkeepsie train station; and provide easier access for persons with disabilities to the park near the center of the bridge. The project is funded primarily by a $2.4 million federal Transportation Enhancement Program (TEP) grant and other grants secured by the not-for-profit Walkway Over the Hudson friends group.

The 8-by-10-foot stainless steel elevator cab features observation windows on three sides and has the capacity to take up to 15 people on its 1½-minute ride. It is expected to be operational by late fall. The elevator construction contract was awarded to BCI Construction of Albany.

Additionally, the Walkway Over the Hudson friends group is spearheading a waterfront gateway project to improve access, safety and the visitor experience at the entranceway to the elevator. The project will create a 400-foot path to the base of the elevator, complete with new fencing and railings, lighting, wayfinding signage, benches and landscaping. The gateway project is moving forward with the assistance of a $400,000 grant through Governor Andrew M. Cuomo’s Regional Council initiative and support from the Dyson Foundation.

“The waterfront elevator will give more people from all walks of life access to the Walkway State Park and its thrilling views of the Hudson River.  It will help lead positive redevelopment efforts currently underway or envisioned for the entire City of Poughkeepsie waterfront,” said Diana Gurieva, executive vice president, Dyson Foundation.

New York State Department of Transportation Commissioner Joan McDonald said, “Funding for nontraditional transportation projects such as this elevator can greatly enhance economic activity, while enabling people with disabilities to access the magnificent Walkway over the Hudson.”

“It is heartening to see the Walkway Over the Hudson continue to grow and have a positive impact on the City of Poughkeepsie and surrounding communities,” said New York State Senator Terry Gipson (D-Dutchess, Putnam).  “This is another great step towards connecting our neighborhoods and business centers to spur our local economy and create jobs.”

Mid-Hudson Regional Economic Development Council Co-chairs Dennis Murray, President of Marist College said, “A key strategy of the Mid-Hudson Regional Economic Development Council is to grow the $5 billion a year Hudson Valley tourism industry and we are very pleased with the progress taking place at the Walkway Over the Hudson State Historic Park.

Today is a major milestone for the project as work begins on the Walkway Waterfront Elevator, which will give visitors access to the waterfront, letting them share more directly in everything that the park has to offer. On behalf of the Mid-Hudson Regional Council, we are pleased to support this project and our State parks, which have always been a great draw to visitors and locals alike.”

A former railroad bridge completed in 1889, Walkway Over the Hudson State Historic Park opened in 2009 and is visited by over 500,000 people a year. A 2012 study found that spending by Walkway visitors generated nearly $24 million in sales and supported 383 jobs in Dutchess and Ulster counties.

The Transportation Enhancement Program is a federal reimbursement program administered by NYSDOT that helps finance projects not generally eligible for funding through traditional transportation programs, including projects that emphasize cultural, aesthetic or environmental significance.  The federally-established eligibility categories include provisions of facilities for bicycles and pedestrians.  TEP is a competitive grant process and projects must have a relationship with the surface transportation system and must be available for public access and use.