A quick look at the cast list for The Drowsy Chaperone reveals many names familiar to those who have attended the summer “teen” productions over the years. Aside from those who have just aged into the program (it’s for 7th to 12th graders), almost all have taken part in previous Youth Theatre productions, and it’s not uncommon to find 16- or 17-year-olds who can truthfully say they have a decade or so of experience at the Depot. 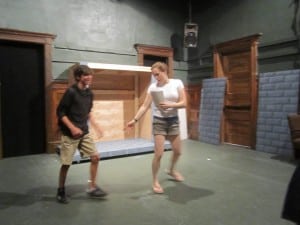 Drowsy Chaperone’s director, Katie Bissinger, has re-upped as well. Back for her fourth summer, Bissinger says there is something special about this program at the Depot. “The Depot is different,” she says. “It seems to draw the right kids who really want to do theater. It’s not a ‘my friends are doing it so I guess I will,’ but an ‘I’m doing it because I want to’ thing.”

Three of those “I want to” actors in this year’s show are multi-year veterans Bernadette (“Bernie”) Barrett, Matt Koval and Sophia Ptacek. Between them they have played Annie’s comedic villainess Miss Hannigan (Barrett), a Chinese laundryman whose entire role was spoken in Mandarin (Koval, in Thoroughly Modern Millie) and “all the parts with the obnoxious voices and the obnoxious laughs” (Ptacek, too many to name). They keep coming back for more because, aside from just being fun, they take away other things from it.

Ptacek notes “It gives us a stronger sense of confidence because of the supportive community here. Older kids are extremely supportive of younger ones. You learn a lot of technical things about theater, and you can carry those things to any type of performance; I perform a lot vocally, and have gained a lot of technique.” Barrett agrees, saying one of the biggest skills she has learned is “how to project to the last row.” 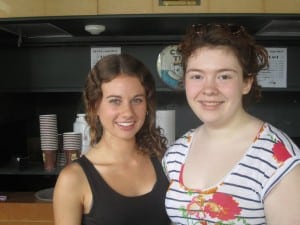 Koval enjoyed his first show (Wizard of Oz — he played the mayor of Munchkin City; he was seven) so much that “I told my family I loved it and that I wanted to come back the next year. I’ve done it ever since — it’s the high point of the summer.”

Asked what he was like that first summer and what experience has taught him, Koval declared himself initially as “very flamboyant, goofy, having fun, putting all my energy into making the show better. I think I have definitely grown on the stage; gained a lot of confidence. You have to be bold to put yourself out there. When you grow up on the stage it shapes who you are.” Koval has a whole other identity in organized sports, and is able to compare the two easily, “The stage stuff helps with the sports because on stage you have to take chances. That translates to the football field because you have to try things there, too.”

Barrett’s been taking chances since her debut as a snowflake in a (non-Depot) production of The Nutcracker. “In my head I was good. I don’t think it translates into being actually good.” That ‘never knowing what’s going to happen’ aspect of live performance has benefited from her years on stage, with accrued experience helping to save the day: in a recent school production of The Music Man, mid-performance “a doorknob got knocked off, the door jammed, and the house started falling. I had to go behind the house, saying my lines. It was so embarrassing, but I got commended for it by people who knew what went on.” 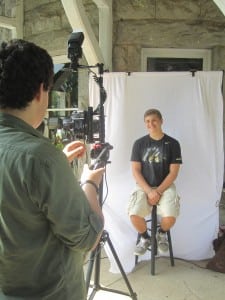 Matt Koval in publicity mode, getting his program photo taken by Tyler Mell outside the Depot Theatre.

Koval has had the actor’s nightmare on stage: during last summer’s Oklahoma, right in the middle of his biggest song, during the closing night with (of course) a full house, “I forgot the lyrics, blanked. But the rest of the cast ad-libbed and really supported me. Although I was angry with myself, I learned a lesson: everyone screws up from time to time and the amazing cast made me realize I wasn’t alone. The cast becomes your family.”

The casts do bond. Ptacek, about to go into her senior year of high school, began as a fifth-grader with Peter Pan. “The experience then of acting with older and more experienced kids gave it a ‘real’ feeling. Particularly that year it was a group where many were hoping to go into acting later in their lives, so this was something they actually chose to spend their time doing and it was inspiring, even if it wasn’t something I hoped to do professionally.”

The ensemble nature of the shows and the large number of participants means that, as in repertory companies, one year one might have a lead, and the next, it might be the ensemble, and of course there can be disappointment, but Koval says, “Every part is there for a reason. If you get a small part, make that one line count.” Barrett says no matter what, she gives her character a backstory. “You can make up your own character that way,” adds Ptacek, “besides, being in the ensemble is actually sometimes a lot more fun.”

Bissinger is enjoying working with the entire cast and said, “For me, these summer shows are a good opportunity to let them expand what they think they can do. There’s no seniority here; in particular I like taking kids who don’t realize their potential and challenging them. In this show there’s such a wide array of characters and it’s a great opportunity for them to play comedy. Knowing I had a large cast I wanted a lot of them to get opportunities and this is unusual for a musical in that there is a small chorus but a lot of larger, feature roles.” 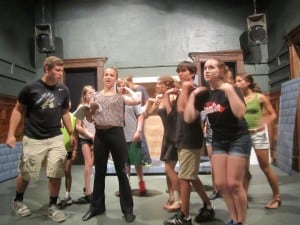 The cast rehearsing one of the musical numbers.

The Drowsy Chaperone, which won Tony Awards for Best Book and Best Score when it debuted on Broadway in 2006, is a parody of the musical comedies of the 1920s. The story concerns a cardigan-sweatered, middle-aged musical theater fan who puts on the record of his favorite musical, The Drowsy Chaperone. As he listens, the show is brought to dizzy life onstage. Fun is what’s being served up bigtime at The Drowsy Chaperone. Bissinger says “audiences just go for it. There’s lots of absurdity in the humor and these kids are really, really funny. It’s broad and farcical, it’s inherent — you can’t resist it.”

“Audiences will love it,” says Koval. “It’s got a lot of twists and turns, zingers and one-liners — the show’s a party. People will get a kick out of what we can do here in a month: the energy!” Ptacek calls it “really not serious. It brings out a lot of ridiculousness.” Barrett, who describes it as “a parody of every Broadway show ever done,” covers all the bases by calling it “a plethora of everything.”

Perhaps the spirit of the summer youth shows may be best realized in  snippets of Bissinger’s pre-rehearsal address to the cast at a recent rehearsal: 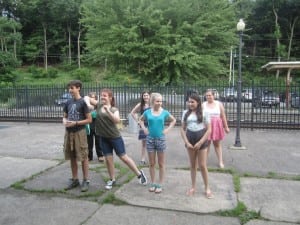 The large cast breaks into smaller groups and one group rehearses outside the theater.

“Okay, everyone, we still need the following props: cymbals, show posters and a whip.”

“Haven’t you ever dreamed of being a monkey in a show? I have. I’ve been a polar bear, but never a monkey.”

And, finally, “It’s so much fun doing cheesy choreography.”