‘The skin is a ghostly partial history of a particular body’

Snake skins usually produce primal reactions ranging from revulsion to fascination. Depending on where they are encountered, and the mindset of the person doing the encountering, they can elicit fear, awe or an entirely aesthetic appreciation of their texture and patterns. For Garrison painter Kevin Klein, snake skins are part of an overall interest in skin, human and otherwise. 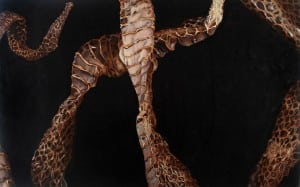 Klein, whose exhibit Snake Paintings opens Aug. 10, at Garrison Art Center, says, in an artist’s statement: “I have a longstanding interest in the fragility and resilience of human flesh. I am also intrigued by paradoxes in paintings, and do my best to involve them in my own work whenever possible. A painting that is highly detailed yet fails to tell us important information about its subject captivates me. The prospect of making a beautiful painting of an ugly thing excites me. Paradox and internal contradictions slow down viewers when they try to read work. Reading a piece more slowly allows for the possibility that viewers will find varied meanings in the painting and will perhaps contribute some of their own to the piece.”

The paintings, so highly detailed that they conjure up a heightened realism, but are, in fact, formal studies of a kind, depict the snake skins, provided to Klein by “herpetologists — friends of friends,” consist mostly of “one big boa constrictor skin, though there are a couple of paintings with a little garter snake skin mixed in” — draped, looped, twisted, in spirals. Klein calls these subjects “different from my usual work because they’re not human flesh; they are a skin, but they’re not ‘a thing’ anymore and the snake should be growing a new skin after shedding this. There are certain features of snakes’ lives you can pick out from the condition of the skin.”

Considered along with some of Klein’s other work, which shows human skin injured or marred by a host of agents: poison ivy, cat scratches, piercings, contusions, punctures, Klein points out that what comes out of it all is “resilience, healing, recovery — a half-full glass of water.”

Klein calls his work “realistic, carefully observed,” but also, like other subjects of his, “a lot of information is missing. Abstract paintings are in the back of my head; my education was very abstract, and I went off in different directions, but it’s there.” Gallery notes highlight the abstract qualities as well: “By painting the subjects much larger than life, the works begin to be something other than just skin. Carefully arranged and placed on a dark, flat field of color, the shedding becomes a constellation of abstract marks creating a space that owes more to abstract expressionism and action painting than to representational art.”

The center’s notes for the show describe the skin itself as  “containing a meticulously detailed record of the body it once protected. In these works, that body’s presence is almost re-created even in the absence of the skin’s former occupant.” With these paintings, Klein began by photographing the snake skins, playing with the object, trying to find compositions he likes. “Mostly I arranged the skins, but I allowed for some chance in the compositions by shooting the same arrangement from many slightly different points of view. Frequently I had a particular Franz Kline painting in mind while I was arranging the skin; I really like thinking about the paintings as inversions of his (white marks on a dark ground) with a little representation thrown in to offer something extra to the viewers who get up close to the pieces. For the photography sessions, sometimes the skins were pinned flat and at other times suspended in space … I make enormous piles of photographs.”

Klein then scales them up onto a canvas, then paints, generally with acrylics first, “then oil, when acrylic won’t do what I want it to do.”  Asked if he felt anything emanating from a particular skin he was painting, Klein said, “Actually, no. When I’m painting, it’s observational work with formal concerns. But when I stop and step back to look at the painting that’s when I see something different: ghostly, ethereal, ominous.” 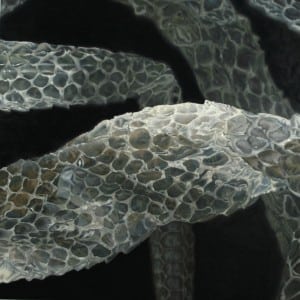 A graduate of Yale, with a B.A. in fine arts, Klein also holds an M.F.A in visual arts from Columbia University. He teaches painting, and sometimes a course titled “History, Materials, Techniques” [of painting] at Manhattanville College. He and his wife moved to Garrison in 2007, seeking something rural yet convenient to their jobs. “My wife grew up on a farm and she missed the dirt,” he notes, adding “It’s so inviting to artists and to hikers.” Klein maintains a studio in Beacon. Widely shown in group, duo and solo shows in the Northeast, this is the first showing of his work in the immediate area.

Also being shown at the Art Center concurrently is Lorrie Fredette’s experiential installation Implementation of Adaptation. Notes from the gallery describe it as follows: “This site-specific installation of mixed media sculptural elements hovers 40 inches from the gallery floor. It can be viewed from 360 lateral degrees and also from a supine position underneath the piece itself via a dolly, creating essentially a second installation for those who dare to lie … The view from the outside through windows depicts an organic mass that appears to float and to be devoid of structural elements.”