In the summer of 1777, George Washington, commanding the Continental Army, sent Benedict Arnold to Upstate New York, to stop an invading 10,000-man British army. By now, Arnold had borne several personal and professional attacks by an ungrateful, politically motivated Congress, and it was only the pleadings of a desperate Washington – who knew the true worth of his “fighting general” – that kept the embittered Arnold from resigning. 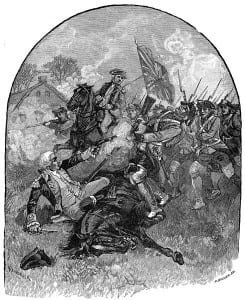 As the British force marched south from Canada under General John Burgoyne, two other British armies, under Gens. Howe and St. Leger, were moving to join him at Albany. Arnold left his headquarters at Saratoga at the head of 900 men, to confront St. Leger’s 2,000-man force of regulars, Hessian mercenaries, and Indians. They met at Oriskany, where Arnold roundly defeated the British general.

Returning to Saratoga, Arnold was stunned to find that General Horatio Gates had been placed in command of the American forces there. Gates, a well-connected and ambitious favorite of Congress, was an inexperienced and inept officer, who had aspirations of taking George Washington’s position as commander-in-chief, and who saw Arnold as a threat to his ascendency.

Gates’ plan for meeting Burgoyne’s army at Saratoga on Sept. 19, 1777, was to dig in behind barricades – a recipe for disaster, in the face of British cannons and bayonets. Instead, Arnold got Gates’ grudging consent to attack the British first, thereby catching them off guard. As always, Arnold was in the forefront, leading by example. The plan worked, and at the end of the long and bloody day, more than twice as many British as Americans lay on the field.

Neither Gates nor his aide, the duplicitous Col. James Wilkinson, had any intention of giving Arnold credit for saving the day, claiming that he had never left camp – a deliberate lie invented to besmirch Arnold’s reputation. British General Burgoyne himself wrote, “Gates would [have] receive[d] the attack in his lines, [but] Arnold chose to give rather than receive the attack.”

Patriot Capt. Ebenezer Wakefield, who had been on the field with Arnold, reported, “Nothing could exceed the bravery of Arnold … he seemed the very genius of war.” And Arnold’s aide attested, “Arnold alone is due the honor of our … victory.” Yet, in Gates’ report to Congress, Arnold’s name was never mentioned.

Had Gates given Arnold the reinforcements he had requested during the fight, the Battle of Saratoga could have ended that day. But Gates, safely ensconced behind the battlements, deliberately denied Arnold the additional support. The battle resumed on Oct. 7, after a three-week lull during which Arnold and Gates quarreled constantly. It was going badly for the Americans, but when Arnold begged to be sent into the fight, Gates – who again stayed well clear of the battle all day – snapped, “General Arnold, I have nothing for you to do. You have no business here.”

Finally, Arnold took command of several regiments of the Connecticut militia, and charged the British battlements on his own initiative. As he led the successful charge, his horse was killed, and he was shot in the same leg that had taken a bullet at Quebec. The falling horse smashed his damaged leg, sending bone through the skin in half a dozen places. As Arnold was carried in agony from the field, American soldiers and officers ran up to congratulate him on his victory.

Ten days later, Burgoyne surrendered his much-reduced army to the American commander at Saratoga – General Horatio Gates. Meanwhile, Arnold, the man responsible for the victory, lay in an Albany hospital, his shattered leg in a “fracture box.” By the time he healed months later, he would be crippled for life, one leg two inches shorter than the other. The damage to his reputation was far more telling.

Gates, who repeatedly averred, “Arnold neither rendered service nor deserved credit” for the victory, ensured that Congress acknowledged only one hero – Gates. Congress had a medal struck in Gates’ honor, while Arnold’s crucial role in the battle that was the turning point of the Revolution was ignored. He lay on his back in pain and depression for months, virtually forgotten while the nation celebrated Gates as the “Hero of Saratoga.”

In early 1778, Washington wrote to Arnold, asking if he was well enough to join the coming campaign. Arnold’s leg was still mending, and for the first time, he turned down his friend and commander. In May, Washington offered Arnold the military governorship of Philadelphia. It proved a disastrous appointment. Arnold’s old nemesis, Congress, which had fled when the British seized Philadelphia, was returning to the city. And worse yet, the ruthless head of the new state government, Joseph Reed, resented sharing authority with the new military governor. It was precisely the kind of situation structured to bring out the worst in Arnold, who saw his new position as an opportunity to secure the lifestyle he had long sought. He lived ostentatiously, and bore himself arrogantly – and he made enemies.

Reed set out to destroy Arnold, and in February 1779, his Pennsylvania Council formally charged him with eight crimes relating to misuse of his office. Although they were spurious, for a long year Reed widely publicized the charges throughout the nation, irreversibly damaging Arnold’s reputation. An outraged Washington convinced Arnold to secure a congressional hearing, in which six of the eight charges were dismissed out of hand, while the other two – involving his private use of military wagons – were remanded to a military court. Benedict Arnold would face the humiliation of a court-martial.

Arnold was stunned. He wrote to Washington, “Having made every sacrifice of fortune and blood, and become a cripple in the service of my country, I little expected to meet the ungrateful returns I have received from my countrymen.”

If Arnold expected an acquittal, he was mistaken. On Jan. 26, 1780, his use of the wagons – although justified by the evidence – was found to be “imprudent and improper,” and Arnold was sentenced to be officially reprimanded by Washington himself. Washington was mortified; for the fiercely proud Arnold, it was the last straw.