On board with teen sailor Laura Dekker

If the daily reports of human stupidity, incompetence, greed, and delusion – and I’m only talking here about American politics – leave you feeling like we’re going nowhere fast on a sinking Ship of Fools, you’ll definitely want to jump ship (with your kids!) at Garrison’s Landing on Friday, Nov. 22, when Depot Docs presents Maidentrip, Jillian Schlesinger’s magical nautical mystery tour with the extraordinary Laura Dekker. 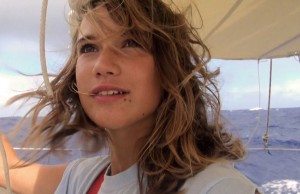 Born on a boat in New Zealand while her parents sailed the oceans blue for seven years, and raised in shipyards in Holland, Dekker was a skilled sailor and at home with the sea from early on. She owned her first boat at age 6, and acquired a derelict two-masted ketch at age 12, which she and her father restored, and she named Guppy. In 2009, when Mike Perham, a 17 year-old Brit, set a new world record as the youngest person to circumnavigate the globe alone, Laura decided that a challenge was in order, and that this was what she had been born for.

Schlesinger, yet another in the remarkable cohort of women first-time directors whose work has been showcased by Depot Docs, first learned of Laura in an Op-Ed piece entitled “How Young Is Too Young To Sail Around the World Alone?” in 2009 in The New York Times. With experience as a writer/producer/production supervisor in television and documentary film, Schlesinger saw a great, one-of-a-kind story, wanted to tell it from Laura’s perspective, and made contact with her.

Laura and her father, who are citizens of Holland, were ensnared in a year-long legal battle with Dutch Child Protective Services, which said that 13 is too young. Laura’s father, reluctantly, and Laura, confidently and vehemently, disagreed. In July of 2010, a Dutch family court ruled that it was up to her parents to decide whether she could make the trip, and Laura announced that she’d be on her way in two weeks. “I just want to explore and get to know the world a little bit,” Laura told Dutch television, “to just sort of live a free life.”

Laura Dekker on her boat

According to Schlesinger, “Laura was involved in every stage of the process. Everyone on the crew treated her as a collaborator … everything shot at sea was shot by Laura alone. We never said what to film, or how often – it was totally self-directed.” As for the narrative voice-overs, “We gave her a recorder and we gave her topics to focus on, but she recorded them by herself, both in port and at sea. We had Laura capture sound at sea, too. It was important that the sound be as much a focus as the visuals.”

This trust in the competence of her young subject was completely vindicated in the finished film, which is so marvelously shot, composed, and narrated. Likewise, Dekker’s trust in her director and other members of the production team was amply rewarded. Schlesinger found material from the family archives and from media coverage to paint in the backstory, and shot film along the way as Laura stops to give herself necessary breaks and enjoy some land-based adventures, meet up with her dad for boat repairs, and encounter fellow travelers, who, like Laura, prefer the sailing life.

Ben Sollee’s music perfectly harmonizes the wild expanse of the open sea with the cramped confines of the little boat, and the watercolor-look of the maps charting Laura’s progress, created by the Moth Collective animation house, are exquisite. Bringing all these disparate pieces together to do filmic justice to Laura Dekker’s epic journey, and to do it with Laura’s vision always in focus, was award-winning editor Penelope Falk’s brilliant contribution to the Maidentrip collaborative.

All filmmaking is collaborative, but what sets Maidentrip apart is the fact that the subject of the film, and every inch its principal collaborator, is 13 years old when the process begins. No, not your common or garden 13-year-old, but, as one writer notes: one who knew more about herself at that age than most of us will learn in a lifetime. And what she doesn’t know – where she belongs in the world – she allows us to spend two years with her finding out. As she told Schlesinger, “You don’t have to know that you can do it, you just have to try.”

Maidentrip will be shown at the Philipstown Depot Theatre, Garrison’s Landing, at 7:30 p.m. on Friday, Nov. 22. Special guests include director Schlesinger, and editor Falk. There will be a Q-and-A after the screening, followed by a reception. For more information call the Depot Theatre at 845-424-3900. For tickets (recommended) visit brownpapertickets.com.