Young people need skills and tools to help navigate life, and the Girls Leadership Institute (GLI) teaches girls to know who they are, and what they believe to initiate changes in the world.

Asked why the Haldane PTA felt there was a need for them to sponsor a workshop series where middle school girls could learn how to resolve conflict and improve communication between each other, PTA President Lourdes Laifer said immediately “I would be surprised if any mother of a daughter that age couldn’t answer that question.” With a tagline of “Be Who You Are. Say What You Mean,” this program for sixth and seventh grade girls aims to provide them with the tools to feel comfortable doing just that. The program, conducted by the nonprofit GLI consists of four two-hour, once-a-week sessions attended by a girl and one of her parents, facilitated by a GLI instructor.

“Girls don’t often have the tools to navigate through all the ‘girl drama,’ which seems to peak in middle school,” says Laifer. “Even as early as kindergarten or first grade there can be inclusive/exclusive behavior.” The PTA Executive Committee thought there was a need – despite the character education program already in place at Haldane – and that a gap could be filled with this GLI program, targeted specifically at girls. GLI is a 10-year-old national nonprofit dedicated to “girl culture.” Defining leadership as “a girl’s ability to know how she feels, say what she needs, and respond courageously to her mistakes,” the aim is to have girls feel more confident and resilient after participating. 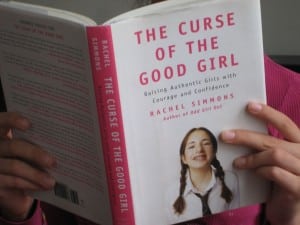 GLI itself stemmed from two prominent books, Odd Girl Out and The Curse of the Good Girl, both written by GLI co-founder Rachel Simmons prior to its founding. According to GLI’s Amie Herman, “It’s our belief that the workshops have an immediate and powerful impact with middle school girls. They help give girls (and their parents) tools and a language to be more authentic in their positive role modeling in school during some challenging transitional years.”

Karen Doyle, the PTA’s middle school vice president hopes for the same: “Having this program at Haldane provides a wonderful opportunity for girls in our local community to attain valuable skills in finding their internal voice, knowing how to listen to that voice and learning how to use that voice to assert themselves in a positive way in relationships, academic settings and any other activity they may be involved in. Haldane has been working very hard at implementing a character education and I think this program will complement those efforts by providing some detailed guidance to the individual student on how to personally contribute to the school’s character vision. I think it would be wonderful to bring a similar program to the community for boys and their parents, too.”

The workshop sessions are titled “Dealing with Difficult Friends,” “Emotional Intelligence,” “Making Mistakes and Not So Funny Jokes,” and “Four Steps for Healthy Conflict.” Laifer sees the outcome as hopefully not only addressing the problems, but also as an “opportunity for growth and change. On their own women and girls don’t automatically have the tools to navigate through the difficult issues: ignoring, pretending behind your back — the things that take place among girls. Girls’ relationships aren’t awful, but sometimes patterns develop.”

Laifer cited an example involving a child she knew: “This girl, once very confident, was placed in a class where she didn’t know anyone, and she experienced girls playing the mean card at recess, being catty, and all year long she felt beaten down because she was the outsider. Then there are the girls who ‘include’ other girls by saying ‘you can’t be friends with that one.’ We want to shine a light on how this happens and why it doesn’t need to happen. Empathy, the golden rule, simple things, but not always accessible to girls … this will give girls a way forward that’s different. It’s very confusing for girls to know how to react. The default is ‘What’s wrong with me?’ but it’s most often about the other person’s agenda, and we want to give girls the tools to understand that.”

Herman feels that the structure of the GLI workshops, with parent participating with child, allows for “a great platform to be set for dialogue about the challenges that girls are facing at school, and also [gives them] tools and skills which can be practiced and reinforced at home in a ‘safe’ setting.”

The sessions will take place at Haldane from 7 to 9 p.m. on four Tuesdays in March, beginning March 4, and cost $265 per adult/girl pair. Scholarships are available. There is no cost to the school to host the workshop, and the workshops are open to the public, not just those attending Haldane. Families register, pay and apply for scholarships through GLI. The PTA offers support by publicizing and is doing so now to give Philipstown families the first chance to enroll; registration is open now. There is a minimum of 12 pairs needed for the program to run, and a maximum of 15. If this pilot program is successful, the PTA hopes to bring it in for other ages, in workshops tailored appropriately.

One parent who will attend with her daughter is Beth Shanahan, PTA recording secretary.

“As she heads into the ‘tween’ years,” Shanahan says, “I think attending the GLI sessions with my daughter will be a great way to begin an ongoing dialogue with her about some of the challenges she may face. I also think it will be an educational experience for both of us, and I am looking forward to sharing this opportunity with her.” Laifer says, “A part of the PTA’s mission is to provide enriching experiences for students and their families, and with this they can practice it together.”