David Rothenberg of Cold Spring, professor of philosophy and music at New Jersey Institute of Technology, contributed to a documentary film that has won the grand prize at the International Documentary Film Festival in Amsterdam (IDFA).

The documentary, Song from the Forest, features New Jersey native Louis Sarno, who has lived in the jungle of Central Africa for 25 years, recording music of the Bayaka pygmies while fully becoming part of their society. The film chronicles his life there and tracks him as he takes his son out of the jungle to visit America for the first time. 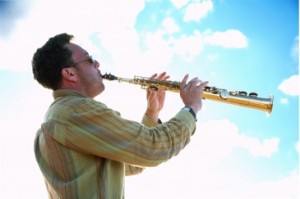 Rothenberg worked as a music supervisor on the film, which won the Grand Prize for Best Feature Documentary at the Amsterdam Festival. Rothenberg was travelling in Berlin two years ago when he heard about the making of the documentary. He met with director Michael Obert, who asked Rothenberg to work on the film’s soundtrack, especially adding more Pygmy music and rainforest sounds.

Rothenberg, who has an expertise in music technology and specifically the relationship between music and nature, agreed. He wrote about Sarno in his recent book Bug Music, describing how the music of the Bayaka fits in seamlessly with the creatures in the rainforest, illustrating in sound how a culture can truly be at one with nature.

“That’s basically how I became the music supervisor on the film,” says Rothenberg. “It’s a great documentary, and it’s now heading for American festivals. We’ll find out soon if we got into the Sundance Film Festival. And if it gets distribution it will show in American cinemas hopefully in the fall of 2014.”