Planning Board may find no adverse impact

The long-proposed, twice-withdrawn proposal to build condos for seniors and office buildings for commercial and possible governmental use on the site of the defunct Butterfield Hospital on Chestnut Street (Route 9D) in Cold Spring appears to be inching toward clearing its first hurdle in the latest iteration of the plan. 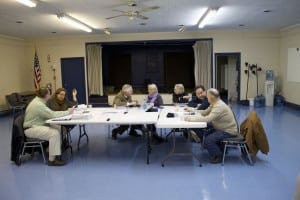 The Cold Spring Planning Board (Photo by K.E. Foley)

The Cold Spring Planning Board, the designated lead agency for reviewing the project, seems poised to vote soon to affirm the applicant’s contention that the project will not have any significant adverse impact on the village’s environment according to the requirements of the State Environmental Quality Review (SEQR) process.

The approval would come in the form of a determination that the applicant had filed a complete and satisfactory response in its Environmental Assessment Form (EAF) to the board’s inquiry and that further “negative declaration” on potential adverse impacts to the environment is appropriate.

The “negative declaration” by the lead agency notifies other interested local, county and state agencies that the applicant has complied with the SEQR requirements by addressing concerns they may have about the project.

By contrast, a “positive declaration” by the Planning Board would trigger the requirement for an Environmental Impact Statement (EIS), a more elaborate, expensive, more detailed study of the project’s potential impact. Requiring an EIS would not be unusual for a project of this size. However, there is no indication the Planning Board contemplates such an action.

“As I listened tonight there were no adverse environmental impacts discussed,” said Steven Barshov, attorney for developer Paul Guillaro’s Butterfield LLC, as he sought to punctuate the approximately 60-minute Planning Board consideration of the 600-plus-page EAF. The meeting was at the VFW Hall on Kemble Avenue Wednesday night (Jan. 8). Barshov’s assertion met with no contradiction from board members or their consultants. Only three board members even raised issues and many of those were clarifications on language or a request for reassurance on certain points.

While the process is still open and the board has yet to vote, there was no indication at the meeting or a previous one on Dec. 18 that the board has any appetite for further SEQR review.

The process began in September when Planning Board consultant Chuck Voss advised the board that Butterfield LLC’s EAF was inadequate in failing to address several issues or not supplying sufficient documentation for its claims. Four months later after numerous offline exchanges between Voss and Tim Miller Associates, a planning consultancy based in Cold Spring, the EAF has tripled in page size, a point driven home often by Voss.  Both Voss and Planning Board lawyer Anna L. Georgiou have told the board several times that Guillaro and his team have been cooperative and responsive and that they believe the EAF is complete.

The current EAF can be seen at the Cold Spring Village website (coldspringny.gov).

The next meeting of the Planning Board is scheduled for 7 p.m. on Jan. 15, at the Village Hall on Main Street. At the meeting the board’s planning consultant and lawyer will present their final recommendations on moving forward, which is very likely to be to accept the EAF as complete and to move to a “negative declaration.”

Should the board make a “negative declaration” next week or soon after, the next step would be to send their findings to the Village Board of Trustees. The Village Board will then take up its proposed zoning change for the Butterfield site, which is necessary for the project to go forward. While the Planning Board is not required to hold a public hearing on its SEQR review, trustees will have to hold one on the zoning change.

When the village held a public hearing a year ago on the move from a B4 to a broader B4a zoning scheme, the trustees encountered a firestorm of protest. Residents in opposition centered their argument on the issue of granting the zoning change to the developer, while promised or proffered amenities, (a new post office, a senior citizen center, consolidated government offices, preserved public open space on the site) remain at best in limbo. Guillaro has said he will work with federal, county, town and village officials to create the services often bandied about.

County Executive MaryEllen Odell has made strong statements in recent months about the county funding a senior citizen center in concert with PCNR publisher Elizabeth Ailes, who has referred to a $500,000 pledge for that purpose in her newspaper several times. To fund an ongoing lease and staffing however, Odell would need county legislative approval. Odell has also said other agencies could conceivably have a presence at Butterfield but no hard details have emerged.

At other times town and village officials have spoken favorably of combined court offices and other consolidation possibilities but such projects require funding and other detailed considerations before becoming reality.

Adding to the political implications is the village election in March when two trustee seats are up for voting. Incumbent Matt Francisco, a Butterfield skeptic, is expected to run for re-election with another seat open, assuming Chuck Hustis keeps to his determination not to run again. Restaurateur Cathryn Fadde and Mike Bowman, former Cold Spring Fire Company president, are said to be gearing up to run as a team.

It will be interesting to say the least to see the timing of the Planning Board and the Village Board’s deliberations given the election scenario.

Assuming approval of all the aforementioned, the Planning Board would still have to conduct a granular site plan review wherein all the demolition and construction details of the Butterfield LLC project would have to be reviewed.