Upfront, it would seem appealing: Save taxpayer money, boost primary-election turnout, bring New York State into compliance with federal law, and perhaps reduce confusion among voters by moving New York state’s primary election from September to the fourth Tuesday in June, the date of a federal primary.

But the Putnam County Legislature’s Rules, Enactments and Intergovernmental Relations Committee last week rejected the idea, although it was more concerned about the June timing than a unified primary itself.

The concept is drawing interest around the state.

By a 126 to 11 vote in January, the Assembly, lower chamber of the New York State Legislature, passed a bill to abolish New York’s September primary election day and hold the primary in June, on the federal primary date. The State Senate has yet to act on the measure. Assemblywoman Sandy Galef, who represents part of Putnam County, including Philipstown, co-sponsored the Assembly bill.

New York State must do something:  Currently, its primary practices violate the Military and Overseas Voter Empowerment [MOVE] Act, a 2009 federal law which demands that Americans stationed abroad get absentee ballots in enough time to vote and mail them back for an election. Under the MOVE Act, the state must dispatch absentee ballots 45 days before a November election — difficult when a primary election occurs in September and absentee ballots go out after primary results come in.

The federal government sued the state for MOVE Act non-compliance in 2010 and a federal court subsequently imposed the June federal primary date.

Those on both sides of the question agree that consolidating primaries would save the state some $50 million per election cycle. Until 1974, the state held its primary in June, but then moved it to September.

In Putnam the issue arose at the Rules Committee Feb. 18 after legislators received a resolution passed by their peers in Yates County calling for state “legislation requiring counties to conduct the state and local primary coinciding with the federal primary.” The Yates resolution argued that “there will be reduced costs associated with conducting only one primary” and that “the 2 percent tax cap and insufficient relief from state-imposed mandates has placed an unprecedented strain on local governments to provide more services with less funding” and, presumably, save money through other means.

Putnam legislators cited fears of voter apathy and absence if a primary occurs on the fourth Tuesday of June, during vacation season. They proposed July or August as alternatives. 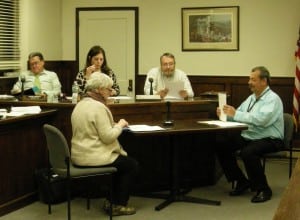 Commissioner Anthony Scannapieco, the Republican of a two-party duo heading the Putnam County Board of Elections, told the Rules Committee that the federal court that ordered the June federal primary date would be open to a July or August primary.

He criticized the notion of holding a primary on the fourth Tuesday in June. “It’s insane,” Scannapieco said. “That means you’ll be circulating petitions now” to get candidates on the ballot, “climbing up that mound of snow” to reach residents’ front door to collect signatures and meet the schedule. Moreover, “the federal government cannot mandate the State of New York on their own state-wide elections,” Scannapieco said. “They can only do federal elections. So we wind up doing the federal primary in June and the state primary in September.” He blamed the dichotomy on an impasse between the Assembly, which favored the fourth-Tuesday-in-June primary, and the State Senate, which purportedly wants a September date.

“There’d be nobody voting” in the June primary, predicted Legislator Dini LoBue, who chairs the Rules Committee. “As it is, it’s hard to get people out for primary votes.”

Commissioner Catherine Croft, the Democratic counterpart to Scannapieco at the Board of Elections, doubted that an August or July primary would draw voters, either. “I think a June primary is a much better time than a July or August” choice, she said.

Statewide, the debate has sometimes been cast as a date-centered conflict, with Democrats opting for June and Republicans for a month later in the summer.

After further discussion, including input from other legislators — non-members of the Rules Committee attending the meeting — the three-person Rules Committee decided to prepare a draft resolution “saying that we’re definitely not in favor of the fourth Tuesday in June” as a primary date, as LoBue summarized it. Their draft, to go to the full legislature for possible action, was also to incorporate language suggested by Scannapieco, using wording from the New York State Election Commissioners’ Association, declaring that the county “supports a unified federal and state primary election that is MOVE Act compliant and urges the [New York State] legislature to reach agreement on such a date as soon as possible to create certainty for boards of election and the electorate throughout the state.”

Disparate state and federal election dates are only one source of potential voter bewilderment and burn-out, or costs of running polling stations. Locally, school board elections, periodic referendums in fire-fighting jurisdictions, and, for Cold Spring and Nelsonville, elections of village officials, all occur on their own days — separate from each other and from state and federal primaries and general elections.