A screening of Bottled Up takes place at the Downing Film Center on Monday, March 10 at 7:30 p.m. Enid Zentelis, writer/director of the film, will offer a Q-and-A following the screening. 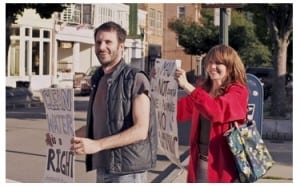 A scene from Bottled Up

Filmed in the Beacon and Newburgh area, Bottled Up stars Academy-Award winner Melissa Leo, and Marin Ireland, Josh Hamilton, and Jamie Harrold. A compassionate mother ponders sacrificing her own happiness in order to care for her drug-addicted daughter. Months after being injured in a car accident, Fay’s daughter Sylvie still claims to suffer debilitating pain.

When Sylvie refuses physical therapy, her growing addiction to painkillers becomes apparent to everyone but Fay. Later, when environmentalist Beckett comes to town, Fay begins to see him as the solution to her daughter’s problems. The growing friendship between Fay and Beckett may be the only thing that can open the mother’s eyes. Once Sylvie’s crippling pill addiction becomes clear to Fay, she must make a decision no parent would wish upon their worst enemy.

Raised in Bellingham, Wash., Zentelis is a professor at New York University, Kanbar Institute of Film and TV.

Tickets for Bottled Up are general admission $9, members $7, purchased at the box office or in advance at downingfilmcenter.com. Seating is on a first-come, first-served basis. The Downing is located at 19 Front St., Newburgh.