Leaving a meeting in April, a county official referred to a pending project in Philipstown as the “bridge to nowhere.” Other critics might consider it “a bridge too far” into government bank accounts: The span on Mill Road will serve one house and cost more than $1.2 million.

Putnam County Legislature this month reluctantly but unanimously approved the bridge-building, after a couple of years of wrangling and county attempts to divert the money to different needs, such as fixing Manitou Station Road, also in Philipstown. 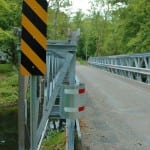 A solitary house peeks from the trees on the far side of the temporary bridge on Mill Road. Photo by L.S. Armstrong

The difficulties began in August 2011 when Hurricane Irene wiped out the existing bridge on Mill Road, which intersects with Route 9, a state highway, in the northern end of Philipstown. A dirt lane lined by trees, with Clove Creek rushing alongside, Mill Road has several houses that can be reached from Route 9 before the road gets to the bridge.

Sen. Charles Schumer (D-NY) visited Mill Road on a post-hurricane tour in September 2011 and the Federal Emergency Management Agency subsequently allocated $902,962 for a new bridge there. New York State earmarked another $300,988 for the project, estimated at costing $1,203,950 total. Of that sum, about $81,350 is for removal of the existing temporary span brought in after the hurricane. A metal trestle-like structure, it carries Mill Road over the creek and provides access to a lone house on the other side.

Beyond that point, the road is blocked off as it climbs uphill. However, maps show it continuing onward to connect with Horton Road, to the southeast. Moreover, Philipstown Supervisor Richard Shea noted May 31 that the town had once opened up a viable way in and out for the lone residence. He, too, criticized the bridge project. “There is absolutely no need to spend that much money on a bridge for one home that already has access from Horton Road courtesy of the Town of Philipstown,” he said.

The ostensible fiscal impact to the county of the bridge project is zero, though that does not count the time (and related portion of salaries) devoted to the matter by various public officials and employees since 2011. While the county owned the bridge that collapsed and owns a 1.2-acre parcel on Mill Road, the road itself is a town road. And in another complication, a Mill Road homeowner — though not the one whose property will be directly accessed by a new bridge — filed a lawsuit against Philipstown over the project, forcing the Town Board in February 2013 to retain Stephen Gaba at $125 an hour to defend it. (Later that month, the board named Gaba’s firm as the official town attorneys.) The litigation continues. 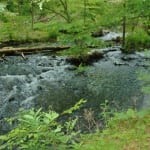 Meanwhile, bridge planning advances, with Putnam County’s agreement though not its enthusiasm.

In an appearance before the Putnam County Legislature’s Physical Services Committee April 22, Highway Commissioner Fred Pena explained that talks with both the owner of the house directly benefitting from the bridge and FEMA had failed. “We were looking to an alternate route to that residence and using the FEMA funds in another area,” he said. “We pursued that vigorously for quite some time until we exhausted every opportunity to use those funds for a better purpose on the west side of the county.” He said the property in question is worth $600,000 — half of the bridge cost — but that for assorted reasons the county could not buy it and solve the problem that way. “The file on this is pretty thick,” he noted. Moreover, he said, FEMA made clear “they would not accept any alternate projects and we were running out of time and jeopardizing the funds that were available.”

“I tried to communicate with the resident” involved, too, said District 1 Legislator Barbara Scuccimarra, who represents Philipstown and is on the Physical Services Committee. “We really did want to use the funds elsewhere,” on a different FEMA project, but could not do so, she informed her committee colleagues. (In a session with the Philipstown Town Board in December, she had mentioned upgrades to Manitou Station Road as a better use of the money.)

The committee then agreed to bring the issue to the full legislature, which, at its May 6 formal monthly meeting, authorized expenditure of the federal- and state-supplied money on a new bridge.

“In principle it’s just horrible: over a million dollars in federal funds for one bridge and one house,” District 8 Legislator Dini LoBue commented before the Legislature voted.

“Basically, we don’t have any choice,” Legislature Chairman Carl Albano observed. “It’s $1.2 million to replace the bridge. The money is designated for this. It can’t be put anywhere else. And if we don’t take the money, we still have to replace this bridge, because it’s our responsibility.”