From the slatted walkways to the open kayak pavilion and the strategically placed wetland areas, everything about Long Dock Park on the Beacon riverfront anticipates rising sea levels and hundred-year storms. “This wasn’t a fight to keep the river inside its banks,” said Meg Rasmussen, senior park planner with Scenic Hudson. “There’s no keeping the river out.”

Scenic Hudson, an environmental organization that acquires and preserves land throughout the Hudson Valley, acquired the industrial wasteland in 1996 and spent years cleaning it up. Long Dock Park opened in 2011 to critical acclaim and an enthusiastic public who were happy to have the riverfront accessible. And it’s designed to flood.

Meg Rasmussen in the meadow with evening primrose blooming all around.

What I love about Long Dock Park is that it’s an example of working with and enhancing our natural resources. Anyone can walk through the park and appreciate the landscaping and river views. It’s a great place to exercise, walk a dog, picnic and fish, or launch a kayak. You could also look a little closer at the environment and observe a flourishing habitat for birds that are taking advantage of the native trees, shrubs and marshland. Or bring along a native plant or wildflower guide and spend time identifying the vegetation that should be growing in our forests, meadows and roadsides, but has disappeared due to browsing deer and aggressive invasive plants. I see a sign of hope, that a piece of our local landscape has been restored. Rasmussen describes the park’s design as “the simplicity belies the complexity.”

During a recent tour, Rasmussen and I started our walk in the meadow. Two years ago it was planted from seed with native grasses. There are a lot of weeds in it now. Rasmussen explained that they are getting the desirable plants established with careful mowing.

No herbicides are applied in the park. Instead, they let the weeds grow to about 8 inches and mow it before the seed heads form. “It doesn’t hurt the perennials and wildflowers to have their heads lopped off,” she said. Eventually the perennial native plants will outgrow the annual weeds. Right now, black tubes snake through the meadow for irrigation, but this is a short-term need that will cease once the meadow is established. It won’t need to be watered forever.

There are two distinct wetlands areas surrounded by marsh grasses and wet meadow plants. On other visits to the park, I’ve seen ducks and geese enjoying them, but today they aren’t around. “The meadows are graded to the low spots and they’re interconnected so that they can equalize the water level between them. It appears that the wetlands are tidal, too, and ground water changes the level,” said Rasmussen. Large berms covered with more native plants guide the water to the marshes.

When Superstorm Sandy hit, many flooded areas lost valuable trees and vegetation that died after being soaked in salty water. Rasmussen described the water here as brackish and said that the plants were chosen for their tolerance to saltier conditions, again anticipating flooding. 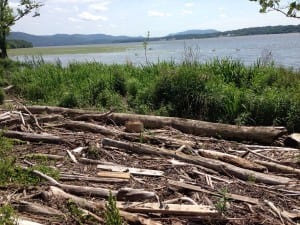 Driftwood piled on the beach at the park stabilizes the shoreline.

Rack, or driftwood that ends up on the shoreline, is being used in one area to prevent erosion and stabilize the shoreline. Rasmussen showed me the area of the beach where driftwood is piled parallel to the water. It captures silt after flooding as the water recedes.

Gray birch, American hornbeam, eastern poplar, and American planetrees are a few of the trees being used to maintain the shoreline, too, along with shrubs, including silky dogwood and buttonbush. Anyone with waterfront property that wants to landscape for preservation can learn from the landscaping choices here.

On the 16-acre plot, Scenic Hudson planted 165 trees, 1,300 shrubs and thousands of native perennial plants. The list of plantings includes many that provide habitat and forage for birds. Asking if that was intentional, Rasmussen replied, “There were feral cats here in the beginning and we adopted them out. Then, by creating habitat for food and shelter, the bird population has really grown.” Look for black chokeberry, bayberry, and viburnum as gorgeous examples of bird-friendly shrubs.

“Most broadly, this is a beautiful, sustainable place for people to enjoy, that was the main vision for the park,” she said. “This just makes a place for people to come to the water and the idea is that native plants are beautiful, hardy and are good for people and for habitat.” She compared it with Foundry Park in Cold Spring, another example of a park that knits together an industrial past, historical significance, people and nature. For now, go check out the blooming primrose and enjoy the views.