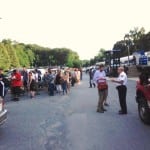 An early Saturday evening (July 19) rock slide onto the Metro-North Hudson Line rail tracks in the vicinity of the Bear Mountain Bridge caused aggravation and anxiety for a large group of southbound passengers, delays for many others, but mercifully no serious injuries.

Travel between the Peekskill and Garrison train stations was suspended for several hours from approximately 6 p.m. until 11 p.m. After a couple of hours, limited shuttle bus service was eventually provided between the two stations for north and southbound passengers. Estimates suggested as many as 600 passengers, many of them hikers and bikers, were involved in the delayed service and bus transport.

Once again local volunteer firefighters and emergency medical technicians interrupted their Saturday night plans and rolled to the scene of what the initial call described as a possible mass casualty incident. Metro North later said the rock slide occurred during work to secure the hillside the rocks were on. It is not known why the initial call for emergency services indicated a train was hit and there might be injuries. 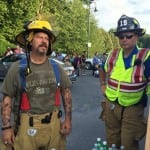 According to a report from the Garrison Volunteer Fire Company, which provided incident command at the scene, five area fire companies, (including Cold Spring, Continental Village and North Highlands) and six ambulance corps (including Philipstown and Garrison) responded along with a full complement of area police, county emergency officials and Metro-North first responders.

The joint incident command, led by Garrison VFC Chief Bill Rimm, was established at the Garrison train station. A medical staging area was created at the Garrison Union Free School but was ultimately not needed. Only one minor injury was reported.

Passengers of halted southbound trains were provided water and toilet facilities (borrowed from Philipstown Park) and the Garrison train station.

The Garrison VFC turned over full incident command to Metro-North officials at 9 p.m.