It may be well past Easter, but with many bunnies being born throughout summer, Hudson Highlands Nature Museum (HHNM) wildlife educator Carl Heitmuller wants to get the word out: “If you care, leave them there.” 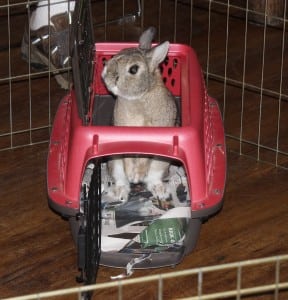 A Netherland Dwarf rabbit, brought along to the presentation, looks a bit surprised to be the center of attention.

What he means by this is if you happen upon a “nest” of rabbits during daytime, seemingly unattended by their mom, resist the impulse to scoop them up and bring them in as the ramifications are usually dire. As these rabbits feed at morning and night, during the daytime their mother is meant to be away from them, and if they are taken from her too early they generally perish within the week from simple stress.

This bit of information was the centerpiece of Heitmuller’s program on Cottontail Rabbits, held recently at Hubbard Lodge in another of the joint programs sponsored by the HHNM and the Hudson Highlands Land Trust.

Heitmuller began the well-attended talk by noting some general characteristics: big eyes, located at the size of their head, a “great nose for smelling,” large back feet, capable of covering 10 feet in a single stride, and reddish brown or grey coloring perfect for camouflage, all along with, of course, the white, cotton ball-esque tail.

Cottontails grow to about 14 to 18 inches long and up to 4 pounds and the females are larger than males. According to Heitmuller, they move in small hops and jumps, but can achieve much greater speeds when frightened, often moving in a zigzag pattern to confuse a pursuing predator. They also can swim well, though rarely favor moving through the water.

Heitmuller took care to mention that these rabbits are not rodents, but instead are lagomorphs, strictly herbaceous animals which never consume meat, possessing two extra incisors, four in total, and preferring clover, grass, leaves, and — in winter — even twigs and bark. They tend to live in or near meadows, fields and other grassy areas. They do not hibernate and spend winter searching for new food sources. Their main predators are foxes, owls, hawks, snakes and coyotes. Because they have many predators, they breed often and have litters several times a year.

Hares differ from rabbits in both appearance and habitat. Dwelling in drier climates, hence not around here, hares have larger ears and longer, skinnier bodies.

Carl Heitmuller illustrates his talk with a live rabbit, this one a Netherland Dwarf.

Breeding occurs from March through the fall. After a 30-day gestation period, after the mom creates a little burrow out of twigs and her own fur, litters generally of four or five young are born. Babies, weighing under a pound, are born hairless and blind, with their eyes opening up before a week has elapsed; after just two weeks they’re already out on their own and are weaned and fully independent at four to five weeks. At just one year they are old enough to have their own litter, and the average lifespan in the wild is three years.

“People find rabbits,” Heitmuller said. “I get calls just about every day around this time of year saying ‘I’ve taken them in the house.’ No!” he stressed. “Leave them there unless you know for sure that the mother is dead. Even if you don’t see her for hours, during daylight, probably nothing is wrong, in fact if the mom stays, hawks and other predators will see activity around the nest and attack. If you do see a dead parent near a nest with living babies, call a licensed wildlife rehabilitator.”

Heitmuller described the mission as unpaid, doing it for the love of animals. Rehabilitators do everything possible to return animals back into the wild and not turn them into companion animals.

For those who do seek a rabbit as a companion animal, Heitmuller urged them to do a lot of research first. “It’s essential to get the right hutch,” he said. “You can leave them outside only if there are no predators around — and these predators can include small animals, for example the short-tailed weasel … Also be aware, if keeping them in a hutch indoors, that the smell of their urine is very strong. And whatever you do, don’t feed them carrots, or rather if you must, take a piece no larger than the size of your thumb and give it to them once a week, or it is like gorging for them — it’s not part of their natural diet.”

At the conclusion of his talk and PowerPoint presentation, Heitmuller invited attendees to sit in a circle where he had them act out a rabbit-being-pursued scenario invoking some of the characteristics he had described. Then it was time for the real deal, as he pulled a rabbit out of, if not a hat, then a cage, or rather opened the door to a hutch, from which a Netherland Dwarf rabbit shyly emerged, retreated, stuck his head out of the open top, and eventually was induced to come into the center of the circle and show himself off a bit.

For more information on the HHNM’s natural history programs, on and off site, visit hhnaturemuseum.org or call 845-534-5506.