Annabel Osborn Prentice and Simon James Terrence Botterill were married on Aug. 30, at St. Philip’s Church in the Highlands in Garrison, New York. The Rev. Francis Geer performed the ceremony. A reception was held at the bride’s Garrison home, Wing and Wing.

Annabel Prentice Botterill, 30, is a Sales Analyst for Google in Sydney, Australia. She graduated from St. George’s School in Newport, Rhode Island, and from Trinity College Dublin with a degree in business, economics and social studies. 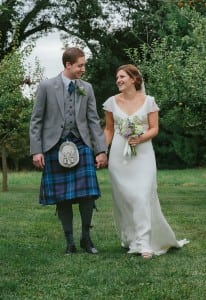 Simon Botterill, also 30, is an Asset Manager in Sydney for Stockland, Australia’s, largest diversified property group. He graduated from the University of Leicester with a BA in financial economics.

He is a son of Andrew and the late Leslie Botterill of Rickmansworth, Hertfordshire, U.K. His father is a business finance director for the advertising agency DraftFCB Europe. He is the grandson of Christine Thorburn and the late Terence Parker, and of the late Vera and James Botterill.

After a honeymoon, the couple will reside in Sydney, Australia.