As entrancing as Strata by Cold Spring’s Matt Frieburghaus is, it’s just the tip of the glacier.

The video installation, which can currently be seen in the back room at Beacon Artist Union (bau) at 506 Main St., in Beacon, is just one of the many new works that Frieburghaus created after spending July at an artists’ residency in the tiny fishing village of Skagaströnd on the northern coast of Iceland. He’ll re-mount Strata, along with the rest of his new works, next month at Marist College, where he serves as associate producer of digital media. His time in Iceland was so fruitful that he spent the fall semester on sabbatical so that he could concentrate on his new work.

“Outside of my duties as a father and a husband, this is literally all I did this past fall,” he recalled with a laugh.

Frieburghaus was invited to Iceland as part of the Nes Artist Residency program. “I didn’t necessarily know what was going to come of it,” he said. “I’ve been wanting to go to Iceland for awhile. I knew that I would get something from it.” 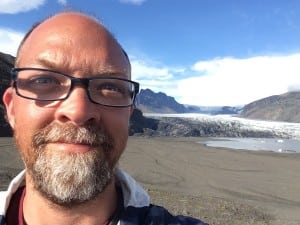 Without a set plan, Frieburghaus spent the month hiking through the town, by the towering cliffs, over the glaciers, onto the mountains and into the open, vast areas in between. And everywhere he went, he shot video and recorded sound.

He was immediately struck by the vastness of the landscape. With no trees around, he found that he could literally see for miles in any direction. And with the arctic summer’s “midnight sun” in effect, the sun simply circled the sky instead of rising and setting. The result was a hypnotic play of light unlike anything he had encountered.

Both of these qualities inform Strata, a video and sound installation. Frieburghaus compiled video stills of the various landscapes he shot; sampled the colors found in the ice, sky, sea and rocks as the light changed throughout the day; and used them to form blocky layers upon layers to create a visual reduction of the landscape to its basest elements.

The visuals are accompanied by sounds of the landscape that Frieburghaus recorded. “I didn’t do anything at all to the sound, it’s super real,” he said. “It’s there to ground you and reveal the landscape.”

As a result, even with minimal information, the totality of the Icelandic landscape and the fluctuating conditions caused by wind and light still come across in the final work, even if the visual image at first resembles a TV test pattern. Over time, the brain manages to fill in the details and smooth out the rough images.

Freiburghaus said that while working on the piece he was amazed to realize how little visual information he needed to produce in order to convey the experience of the landscape. “My wife Laura is also an artist,” he said. “She walked in one day while I was working on it, looked at it and said ‘You’re already done. Don’t do anything else to it.’ Iceland has really transformed my work, I’m really starting to look at things in a much simpler way.” 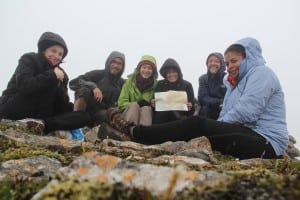 Icelandic artist residents at the top of Spakonufell Mountain

Even after spending a month in Iceland, Frieburghaus is already thinking about projects he’d like to do if the opportunity to travel there again ever came up. At the top of his list: recording the sounds of glaciers via contact microphones. “I spent a whole day exploring some of the glaciers near the town, but I wish I’d spent a week.” And although it would be interesting to travel there during a different time of year so that he could observe how the light from the rising and setting sun transforms the landscape, he admits that the midnight sun certainly allowed him to make the most of his brief time there.

“I could shoot video at midnight and never have to worry that I wasn’t getting enough light,” he said laughing.

Strata can be seen at BAU, 506 Main St., in Beacon, on Saturdays and Sundays from noon to 6 p.m. through Feb. 8. Frieburghaus’ sabbatical exhibition will run from Feb. 12 through March 8, with an opening reception on Feb.12 from 5 to 7 p.m., at the Marist College Art Gallery in the Steel Plant Studios building at Marist College.

Photos courtesy of the artist