Parade organizers always hope for the best, starting and ending with good weather, but not even the most optimistic among them could have imagined, let alone hoped for, what happened on Monday (Jan. 19) while Beacon celebrated Martin Luther King Jr. Day. 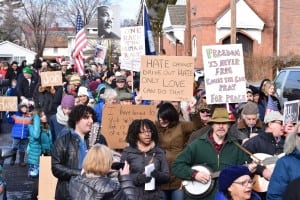 This year’s parade was well attended as hundreds marched shoulder to shoulder through Beacon.

As hundreds of marchers walked arm-in-arm down Main Street, singing songs and carrying signs in honor of Dr. King, the iconic champion of nonviolent activism in the advancement of civil rights, three bald eagles, equally powerful emblems of American freedom, soared high overhead. “How symbolic!” one parade watcher was heard to exclaim. 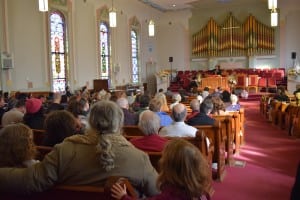 Springfield Baptist Church was the center of activity.

The Southern Dutchess Coalition (SDC) coordinated the 37th annual MLK Day celebration as has been the tradition, with activities centered at the Springfield Baptist Church at Mattie Hooper Square. After opening ceremonies, participants gathered outside the church and marched in what was billed as the Second Annual Pete Seeger/SDC Community King Parade.

More a march than a parade, it evoked memories of King’s civil rights work in the South. Hundreds of people walked arm-in-arm singing songs reminiscent of that era; from “If You Miss Me at the Back of the Bus” and “Ain’t Gonna Let Nobody Turn Me Around” to “Down by the Riverside” and “We Shall Overcome.”

Handmade signs quoted King with sayings such as “Hate cannot drive out hate — only love can do that,” while others read, “Blessed are the peacemakers for they shall be called the children of God.” True to the spirit of the day, the march and the day’s numerous activities were well integrated.

Ahead of the curve

Beacon has been well ahead of the national curve, not in just remembering King, but in celebrating his accomplishments and incorporating what he stood for as part of community life. A day honoring King was not celebrated as a federal holiday until 1986, three years after President Ronald Reagan signed it into law. 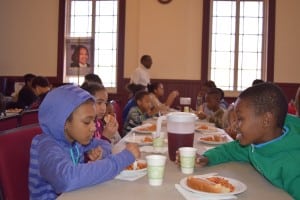 As is the case each year, kids got to have lunch before the adults.

But the roots of Beacon’s annual homage to the civil rights leader, assassinated on April 4, 1968, in Memphis, date back to 1977, the year resident Barbara Baker hosted a meeting in her home that saw a broad coalition of local organizations begin to plan what is now an annual tribute to King. 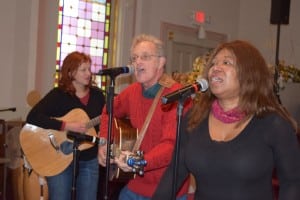 Music is always a big part of MLK Day.

Comments from this year’s participants had a similar ring. It was not a somber occasion. “I feel great. I’m here to celebrate Martin Luther King and I’m looking forward to marching and singing,” Beacon resident Traci Garner told The Paper. Asked what comes to mind when she thinks of Dr. King she said, “Strong leadership, a humble man.”

Beacon resident and business owner Gwen Crenshaw doesn’t see the observance of MLK Day as something that is optional. “It’s an absolute necessity — part of American history,” she said. “It is so important to remember the great sacrifices made by so many so that we can have the freedom and liberty we have today.” Of King she said, “I feel a great sense of pride and humility and thankfulness. He was a great man.” 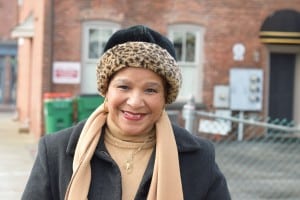 Alvin Bell Jr. and Sr. attended the day’s festivities together. “Dr. King represented hope for our people — equality,” the younger Bell said. While he said that he likes the direction that Beacon is heading as a community, he called upon religious and elected leaders to do more for the city’s youth. 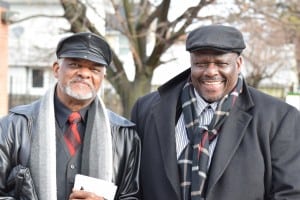 Teaneck, New Jersey, resident Reggie Bennett doesn’t really think of MLK Day as a holiday. Now a music teacher in Westchester County, he was born and raised in Beacon. “This is not a day off — it’s a day on,” he commented. “It is part of my upbringing, part of me.” He sees the day as a call to action. “It’s a day to be educated about black culture and accomplishments … and about humanity and about universal love.” 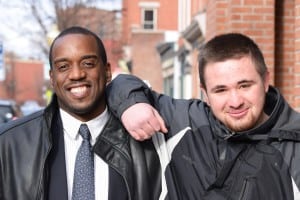 Music teacher Reggie Bennett (left) invited one of his students, Patrick Nepolitano, to share in MLK Day festivities with him.

Standing with him was one of his students, Wappingers Falls resident Patrick Nepolitano. “Reggie invited me out today,” Nepolitano said. “He’s a good man. A good teacher.”

Linda Richards and Shameika Hanson also marched and sang together. Hanson praised King for his achievements in civil rights, describing him as “a great person who had great people behind him,” adding, “There’s still work to do. We should all be Dr. Kings.” Richards, music director for the Beacon-based environmental group Clearwater, said she brings music to many different events. “This is such a great situation — so many people coming together for a common cause.” 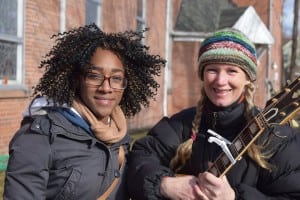 Shameika Hanson, left, and Linda Richards, marched and sang together.

Richards recalled reciting King’s “I have a dream” speech when she was in the eighth grade. “I always remember that moment,” she said. “I was too young to remember the civil rights marches, but that speech resonated with me.”

An eight-year-old gets it right

Richards was far from being the only person at this year’s celebration who was too young to remember King’s life firsthand. Eight-year-old Xavier Jones, a third-grade student at the New Covenant Learning Center in Beacon, was born some 38 years after Martin Luther King’s death. He was the youngest winner in the second annual MLK community essay contest, this year’s theme being “What is your destiny?” 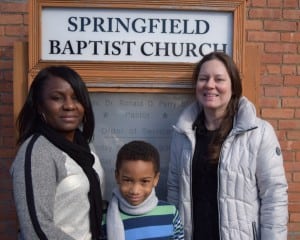 The young Mr. Jones has already determined the direction he is headed. “I want to be a good guy, a respectable man,” he told The Paper. Describing Dr. King he said, “He went to college at age 15. He was a brave man, a courageous man.” And in terms of his own future Jones had said this to say: “I want to work for the FBI. I want to be courageous like Dr. King.”