Cold Spring’s Historic District Review Board on Wednesday night (Feb. 25) declared its intent to hold a public hearing March 25 on the architectural design of the planned Butterfield redevelopment, giving residents a chance to appraise the appearance of the buildings and how they fit into a historic village.

If it occurs as anticipated, the public hearing would be the second in March on Butterfield. The first, conducted under the auspices of the Planning Board on Wednesday, March 4, will consider the site plan and a property subdivision integral to the redevelopment scheme.

HDRB members chose — assuming the logistics work out — to meet again on March 4 (before the Planning Board’s public hearing that night) to formally vote on scheduling their March 25 hearing. 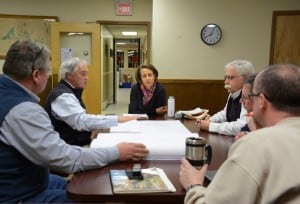 Paul Guillaro of Butterfield Realty LLC, the site’s owner, first suggested March 25 as a viable hearing date, and the board was amenable. “If we can accomplish that, let’s try,” HDRB Member Kathleen Foley said.

The HDRB has been considering the Butterfield project in depth for the past few months, although, like Cold Spring’s Planning Board, its involvement with Butterfield overall reaches back to 2012 or earlier.

On the site, Guillaro wants to construct a complex consisting of an intergovernmental “municipal” building; a commercial-retail building of shops and offices; four structures with a total of 55 market-rate condominiums for retiree-age buyers; and three stand-alone, single-family homes, while retaining the existing Lahey Pavilion medical clinic. The abandoned old Butterfield Hospital would be demolished.

As currently planned, Building 2, the ’municipal’ building in a redeveloped Butterfield complex, would house governmental facilities.

Before expressing desires to convene a public hearing in late March on the architectural plans, the HDRB continued its painstaking review of components of the planned buildings — everything from exterior trim and crown molding, use or not of wood in some instances, shutters, lighting and more.

The project does not need to meet the strict design standards applicable in the village’s National Historic District, a factor that makes possible easier use of non-natural products at Butterfield. By contrast, townhomes that Guillaro built along the waterfront in Cold Spring, in the National Historic District, used wood in crucial places instead of more weather-hardy synthetics. “We suffer with that,” Guillaro noted. “Down on the waterfront, it was not a good move. The repairs every year are just tremendous.”

The board did not object to synthetics at Butterfield. 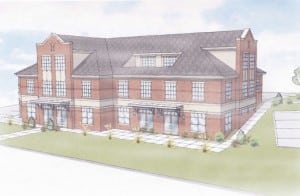 Building 1 at Butterfield would contain shops and commercial offices.

Moreover, as the HDRB pondered the virtues of one form of trim over another or traded opinions on comparable issues, Guillaro and his team, including architect Ray Sullivan, demonstrated a willingness to shed elements that raised aesthetic questions. “I wouldn’t mind simplifying the details and getting rid of some of this stuff,” Guillaro said at one stage. “We’ve got too many details as it is.”

One element scrapped was shutters. HDRB Chairman Al Zgolinski referred to a philosophy, which he clearly shared, that merely decorative shutters are extraneous. “If you’re going to have shutters they should be shutters that close,” he stated. “Otherwise, don’t have shutters. I’ve always thought that shutters that are obviously non-functional are chintzy-looking. My preference would be to lose them.”

“They’re out,” Guillaro responded. “Anything else you want to cut?”

Nothing significant came up.

Butterfield Realty’s Matt Moran and colleagues went over lighting, telling the board one goal is to provide sufficient lighting without it becoming obtrusive with endless poles sticking up everywhere. As envisioned, the complex will have bollards, to illuminate walkways; four “bishop’s crook”-style lamp posts; a greater number of other street lights; and wall-mounted fixtures as well.

The discussion also touched on likely occupancy of Building 2 and the best place to relocate a commemorative arch installed in the old hospital. “For the moment,” Moran said, Building 2 “is headed toward county services and a community center. So we’d like to put the arch in Building 2. That’s what we think is the most prominent location.”

Drawings on file with the Village of Cold Spring