Big life changes percolate in little moments. That seems to be the impetus behind the formation and continuation of Laminated Menu, a one-man, three-woman band, self-described as playing “hints of garage rock, psychedelic, post-punk, dream pop, and good ol’ rock ’n’ roll,” based out of Cold Spring and Beacon and headlining at Dogwood on Thursday, April 2.

The band dates from a sunny summer day in 2009. Sophia Jackson, an artist/puppeteer/Alexander Technique practitioner, was painting faces at a kiddie party in Garrison. Neal Santelmann, a freelance writer, was chatting about bands he’d seen on YouTube. She’d sung with Crazy Mary, an idiosyncratic band out of NYC. He’d been playing guitar for decades pretty much on his own. Someone suggested a jam session.

Their first practice took place soon after, on the Fourth of July, 2009.

In fact, Santelmann (part of the Cold Spring side of the equation) said: “That conversation changed my life. If Sophia hadn’t happened to say, ‘I used to be in a band,’ I’d probably still be playing in my own living room and nowhere else.”

Over the course of the next two years, the two neophytes-in-different-ways — he had never played in a band, she hadn’t had formal training on an instrument — met once a week, usually fairly late in the evenings, once freed of their family and work commitments, writing and rehearsing on electric guitars.

“I learned that what’s great about Neal is that he understands and can arrange music intuitively,” Jackson said. Santelmann returned the praise: “She definitely became my muse.” 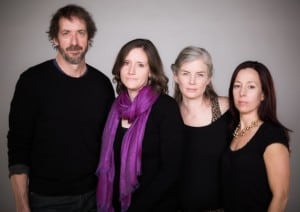 Jackson has an art school background but became dissatisfied with that field. “When I left art school I realized I wanted to be working with other people. I wanted to work collaboratively, so I worked in film for a little while. Moving up here with a small child, with a husband working in the city, my life shifted and I thought I’d lose my mind if I wasn’t around other people, but I’m not by nature a go-getter and it was by chance that I ended up in a band.”

Jackson and her husband chose Beacon after they “got adopted by a German shepherd in the streets of Brooklyn. It was our quest to follow her: She got us hiking at Bear Mountain, then swimming. We came up bunches of times for six, seven years, exploring, ever following the dog! Finally we were priced out of Brooklyn, drew a circle around as to how far we could move and came to Beacon eight and a half years ago.”

Santelmann, originally from Maryland, moved to New York City in the mid-1980s. A writer, he spent 15 years working for Forbes magazine. Santelmann and his wife and young son eventually wound up priced out of the city, and having visited Cold Spring while dating, moved up.

Nine months after the pair met and began working on music together, they summoned up the nerve to play at a Whistling Willie’s open mic night hosted by musician Kathleen Pemble. It was Santelmann’s first time ever performing in public. They followed this up with a few other gigs, all the while continuing with songwriting, in a process that usually begins with Santelmann writing music and Jackson working out vocal lines.

“The way I learned everything was Neal would have to sing to me, with me, until I got ‘off book,’” Jackson explained. Santelmann added: “Going through tunes and messing around is my favorite part of the process. You make discoveries and shape the material.”

Continuing along the serendipitous path of music-making, Santelmann met Cold Spring’s Greg Remillard, who just happened to have a small recording setup at his home. Six months later, an EP (short album) was recorded.

After continuing to write, the duo realized they had enough for a full CD. When Remillard listened to their 13 songs, the advice he proffered was: “I think you need a bass player and maybe a drum machine.” 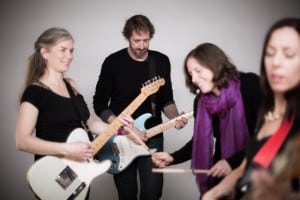 In the true Cold Spring moment that followed, Santelmann met another dad on the Haldane blacktop who said, “You should meet my wife — she’s over by the swings — she plays bass.” With that, Margaret Hundley Parker listened to the band’s EP, brought them one of hers from a band she had been in back in North Carolina, and voilà, the band grew from two to three.

With the addition of drummer Candace Cole, the group spent eight months rehearsing before debuting as a foursome at Dogwood in January 2014. They followed up with another show at the Chapel Restoration.

“There’s a huge learning curve when you’re going out and performing, learning how to listen to yourself. We’re still learning lots of stuff about how to understand our sound in different environments,” Santelmann said. 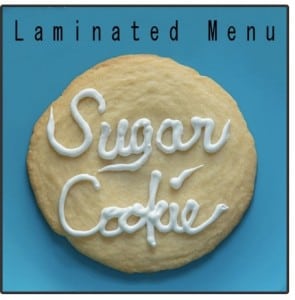 Laminated Menu recorded their first CD, Sugar Cookie, in January 2014. A changeover in drummers to Beacon’s Jennifer Paull happened smoothly, when the remaining band members heard her playing in a Morrissey cover band at Quinn’s. “She has made us into a rocking band — she’s very energetic, very creative and likes to drive hard and fast,” said Santelmann.

“We try to be a democracy,” said Santelmann. “Nobody tries to be protective of what they come up with.” Jackson agreed: “We try hard to work collaboratively; the drummer and the bassist come up with their own lines.”

Laminated Menu practices every week. “We love it. We didn’t have the luxury of being 20 and spending all our time doing it. Everybody’s freelance, so schedules constantly change and it’s challenging. But it’s everybody’s outlet from real life so there is a deep commitment to making it happen. We also have very supportive spouses.”

While continuing to play locally, Laminated Menu stays busy writing new songs, with a definite goal of a second CD release some time in the future. For now, there’s the Dogwood show on April 2, at which, said Santelmann, “We’ll be playing every song we’ve got!”