Danielle Pack McCarthy won Nelsonville’s runoff election for trustee on Tuesday (March 31), claiming 126 votes while her opponent, Thomas Robertson, got 104. On March 18, they had tied with 90 votes each and thus continued their campaigns for nearly another two weeks, ultimately drawing more voters than in their first go-round. 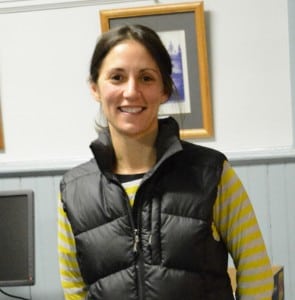 Danielle Pack McCarthy in the Nelsonville village office after her victory (photo by L.S. Armstrong)

The March 31 total included 27 absentee ballots — 21 for Pack McCarthy and six for Robertson. Counting both in-person and absentee votes, Nelsonville citizens cast 230 ballots on Tuesday, compared to 184 on March 18, when the position of mayor was also on the ballot. There are 367 registered voters in Nelsonville. (Incumbent Mayor Tom Corless won re-election March 18, easily overcoming a write-in challenge.)

Village Clerk Pauline Minners announced Pack McCarthy’s victory at approximately 9:30 p.m. on Tuesday, about half an hour after the closing of the polls, located in the Nelsonville Village Hall annex. A small gathering of candidates and supporters, plus news media, clustered around to hear the results.

“I’m pleasantly surprised” at the victory, Pack McCarthy told Philipstown.info, adding that she was struck as well by the level of participation. She lives near the village hall and said she saw a steady stream of residents going to the polls throughout the day. “It really made me proud. I was just touched to see how many voters turned out. It was emotional to see that” depth of concern. “I just want to really thank the voters.”

She also praised Robertson for choosing to run and said his role “made it really a part of history” for the village. Ties and runoffs are unusual in local elections. Pack McCarthy also noted during the campaign that no woman had ever served as trustee — a long-standing pattern of male exclusivity now ended.

Robertson left the annex shortly after the results were announced without making a public statement.

Donald Graham, one of the Nelsonville residents at the polls for the results (and to join his wife, an election official), also thinks the high turnout showed “a lot of interest” in Nelsonville affairs. “Maybe more people will come to the [village] meetings now,” he said, with a note of hope.