For Hudson Highlands Jewish congregations, Passover is a time of joyful religious observance, reunions with family and friends, and sharing with others less fortunate. The annual holiday — observed this year from Friday evening, April 3 (in the Jewish calendar, 14 Nisan 5775), until Saturday, April 11 — recalls the ancient Israelites’ liberation from oppression in Egypt as danger passed over and away from them.

Also called Pesach, the Festival of Unleavened Bread, and Hag ha-Matzot, Passover includes recitations and reflections, immersion in traditions, and ritual dining — sometimes with dozens in common celebration. The eight days begin with get-togethers and dinners on two nights, Friday and Saturday, with one geared to a wider congregation and the other focused around a smaller group of family or friends.

The Seder, a meal and service mixing solemnity with festivity, features special menu items, such as the flat matzo (or matzah) bread; songs and narrative, and the Haggadah, which Philipstown Reform Synagogue member Rhoda Needelman described as “a sort of prayer book for the evening’s service.” She said that other Seder food specialties include celery dipped in salt water, reminiscent of tears shed by the Israelites undergoing persecution, and a sort of fruit salad of apples, dates and honey, recalling the mortar of the Israelites’ forced-labor projects, while on the table, a sprig of parsley represents spring, and a hard-boiled egg symbolizes renewal. 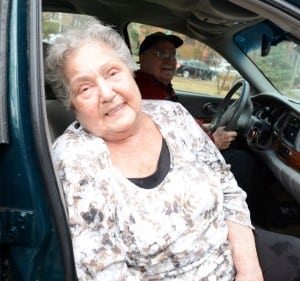 Rhoda Needelman and husband Marvin (background) pause in Cold Spring to visit briefly with a friend before leaving for a family Seder on the beginning of Passover, April 3.  (Photo by L.S. Armstrong)

Deep in the midst of preparations last week, Needelman and others related their plans for Passover events and the importance in a 21st-century world of recalling escape from slavery under the ancient pharaohs.

“Passover is different from other Jewish holidays, as it is celebrated more in the home than in the synagogue” with unique foods and activities, Needelman said. “It is about bringing the family together.”

To Aaron Pincus, a member of the Beacon Hebrew Alliance, Passover means “Jewish history. It’s the only holiday where you’re putting yourself in situations to remember your past. The food is supposed to be what was [eaten] when leaving Egypt, the story is supposed to make you think that you were there, and the whole holiday is filled with symbolism of the passage out of Egypt,” he told Philipstown.info April 1. His plans consisted of spending Friday and Saturday evenings “with my family and close family friends,” about 30 people “together for those first two nights.”

Needelman said March 31 that her husband, Marvin, would lead their Seder at the home of their son in Armonk and that the family members represent three generations — fitting, since one Passover good deed, or mitzvah, is passing down the ancient exodus story from old to young. During Passover, “we also remember that there is still slavery in the world and that our struggle to end it continues,” Needelman added. “And during the meal we invite anyone passing by to join us, saying, ‘Let anyone who is hungry come in and eat.’ This reminds us of another of our obligations, to feed the hungry.”

Coming together as a community

Joan Pirie’s Passover activities included helping prepare and participating in the April 3 Community Seder of Beacon Hebrew Alliance, joining with about 90 others. 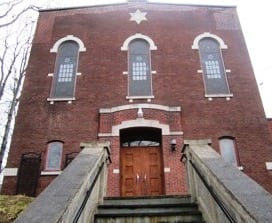 On its website, the BHA, a progressive Conservative congregation, summed up aspects of the Seder succinctly and with a touch of humor: “We’ve got liberation, matzah balls and more, cooking up at the Beacon Hebrew Alliance Seder! Our food is homemade Jewish soul food; our Seder is hand-crafted from only the finest songs, skits and Torah insights; and our matzah … well, our matzah still tastes like cardboard. Everyone is welcome.”

BHA took reservations, which filled up in advance, charging a modest, staggered fee for the dinner (less for senior citizens and children) and offering both vegetarian choices and those containing meat. The Hebrew Alliance also urged attendees, when making their reservations, “to add a ‘plate for Elijah,’ so that all who are hungry can come and eat,” regardless of financial means.

“I love sharing the holiday with our community — both old friends and first-timers,” Pirie said April 2, amidst work on the BHA Community Seder. On April 4, she said, she would “be joining friends for the second night — the first time at their house for a Seder — it’s always fun to see how others observe the traditions.”

A convert to Judaism, Pirie explained that “my Passover experience was chiefly shaped by my husband’s parents (who were Holocaust survivors, which added another level of complexity to the liberation story of Passover). At first all it meant to me was a meal shared with family, with the foods and traditions of my in-laws … Over the years I have come to dwell more on the symbolism of the Seder and the liberation of the Jews (and the miracle of the parting of the Red Sea).”

For the end of Passover on April 11, the BHA scheduled a presentation by Charlie Bernhaut, host of the Internet program Jewish Soul Music, on the life and music of Yosef “Yossele” Rosenblatt, regarded as one of the greatest cantors of the first part of the 20th century. “The program will be a beautiful and uplifting conclusion to the Passover week,” Rabbi Brent Spodek predicted. 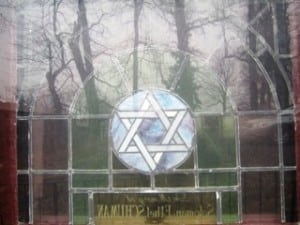 A window at the Beacon Alliance. (file photo)

Another Jewish congregation, the Reform Temple of Putnam Valley (RTPV), chose to hold a model Seder and “kosher-style” potluck dinner, Shabbat service and dessert reception, free of charge and open to the community, on March 27, a week before Passover. The temple invited “first-time guests to join in” and said that “in addition to being a fun and educational experience,” the evening could help attendees “acquire creative resources that they can use at their own Seders” later. Its website includes a page with “Music of the Passover Haggadah,” with blessings and such selections as “The 10 Plagues” chant and “The Frog Song.”

As “a warm, caring, diverse and inclusive congregation … particularly sensitive to the varied needs of its community, including individuals raised in various Jewish traditions and interfaith families,” RTPV said it “welcomes Jews from all backgrounds and lifestyles.” Its outreach to neighbors includes being co-organizer of the Putnam Valley Food Pantry. RTPV’s Shabbat service next Friday, the evening of April 10, is slated to include “a Yizkor Memorial Service for the last day of Passover.”