The newly constituted Cold Spring Village Board met for the first time on Tuesday, April 7, and while the mandatory “reorganization meeting” was devoted almost entirely to appointments and authorizing resolutions, it also signaled a changing of the guard. 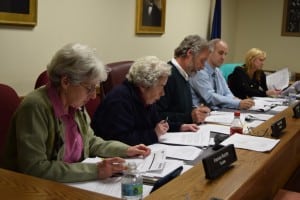 Newly elected trustees Fran Murphy, left, Marie Early and Mayor Dave Merandy, along with incumbent trustees Michael Bowman and Cathryn Fadde, got down to business at the first meeting of the newly constituted Cold Spring Village Board held on April 7. (Photo by M. Turton)

Newly elected Mayor Dave Merandy opened the session, admitting that in addition to being excited about his new role he was “a little nervous.” He expressed hope that eventually meetings will be “fewer and shorter” and that he and his fellow trustees “can bring a little respect back to the board” that he feels has been missing.

Merandy said that he had already met informally with the fellow board members to discuss how the group can work together effectively.

The board unanimously approved numerous appointments; one of the first was to name Marie Early, Merandy’s running mate in the election, as deputy mayor.

As has been the tradition, the mayor was named chief budget officer. Merandy   will also represent the Village Board in dealings with Putnam County, the Town of Philipstown, the Cold Spring Boat Club and the police department. Early will take on a number of responsibilities including personnel and audit committees.

Trustee Michael Bowman will again deal with insurance and risk management and will act as point person for the Village Board on issues related to the Cold Spring Fire Company.

Trustee Cathryn Fadde will work with Early on the audit committee, and Fran Murphy will deal with Americans With Disabilities Act compliance along with Early.

Merandy followed through on an idea he raised during the election campaign — to eliminate having trustees serve as “liaison” to other committees and organizations. Instead, chairs of the Planning Board, Zoning Board of Appeals (ZBA), Historic District Review Board (HDRB) and the Parking and Recreation Committees will update the Village Board directly. Other organizations such as the Chamber of Commerce and Haldane School Board will be encouraged to present quarterly reports.

Three new committees will be established: a grants committee to look into potential external funding sources; a research committee to provide background information to trustees on such topics as police consolidation; and an Independence Day committee to plan festivities for the Fourth of July holiday.

Donald MacDonald was named chair of the Planning Board, a position previously held by Barney Molloy, who ran against Merandy in the March election. Others appointed as chairs include Greg Gunder, ZBA; Jeff Phillips, Recreation Commission; and Al Zgolinski, HDRB. Terms of one, two and three years were set for members of the Tree Advisory Board.

Correspondence from the New York State Department of Environmental Conservation (DEC) indicated that the agency has agreed to extend until April 22 the deadline for the Village Board to finalize details of an amendment to the lease with the Cold Spring Boat Club. Once that is complete, DEC will begin the bid process for excavation of coal tar from the Boat Club site, scheduled to begin next fall. Merandy said that he and Murphy planned to meet with the Boat Club’s leadership on April 8.