Photographer and conservationist Alison M. Jones to speak at Beacon Institute on Saturday

Throughout her career, the photography of Alison M. Jones has centered around a few subjects: biodiversity, watersheds and the cultures that live alongside the world’s great rivers. But it wasn’t until she had the perspective that comes from being 2,000 feet in the air that she saw how they were all connected. 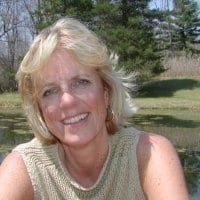 It was there, co-piloting a Cessna above sub-Saharan Africa, that she was struck by how monochromatic the majority of the landscape was.

“Most of the continent is gray and brown,” she recalled. “But then you see what looks like a green ribbon that someone threw across this gray-brown mat. You realize that those are the streams and lakeshores. That’s where you see the wildlife and the villages. And I kept saying in the plane, ‘It’s so clear that where there’s no water, there’s no life.’”

That phrase — “No Water, No Life” — became the name of the nonprofit organization that Jones subsequently founded. No Water No Life uses the power of photography to document and raise awareness of the world’s vital watersheds, support the scientific research that seeks to find the best ways to protect them, and promote cooperation between riparian communities and countries.

The group focuses on six specific watersheds: three in North America (the Raritan, the Columbia and the Mississippi) and three in Africa (the Nile, the Omo and the Mara). Jones has traveled to and photographed these watersheds dozens of times. She even grew up in the Raritan watershed in New Jersey, which is where her love of the outdoors began.

“I had no idea growing up where all those streams went, or that they all joined together to the Raritan, which represents the largest drainage in the nation’s most densely populated state,” she said. “I never realized it was all connected. Most people don’t.”

Anyone else who has never stopped to consider the interconnectedness of our area’s streams and rivers will get a chance to do so by visiting the Beacon Institute of Rivers and Estuaries on 199 Main St. in Beacon until Oct. 3. That’s where an exhibit of Jones’ photos entitled Following Rivers recently opened. Jones herself will be on hand this Saturday, April 11, from 6 to 7:30 p.m. to speak about her work and the exhibit.

“Instead of people walking out of this show and thinking ‘Wow, what a great photographer,’ I’d rather they think, ‘Wow, I never really thought about our rivers and how they make up an entire watershed,’” said Jones. “I use photography to raise awareness. And with awareness comes stewardship.”

Since founding No Water No Life in 2007, Jones has already seen how increased awareness is leading to increased stewardship, even in places rife with distrust. She recalled attending the first annual Raritan Watershed Conference in 2008 and noting that people from the bucolic upstream portion of the river sat on one end of the room while those from the more urban and severely polluted downstream portion of the river sat on the other end.

“They didn’t talk,” she said. “They actually resented each other. It was very clear; you could feel it in the room. That’s all gone now — everyone’s working together, everyone knows each other now. It’s an astonishing transition. Once you get people working together in the same room, sharing their concerns and learning from each other, then you get good stewardship.”

A sense of stewardship is also beginning to spread across the Mississippi as farmers are becoming aware of the effects that the runoff from their farms is having on the 5,000-square-mile “dead zone” that forms in the Gulf of Mexico each spring. “There’s a concerted effort there now to reduce the use of pesticides and other chemicals by 15 to 20 percent,” said Jones. “That shows a new sense of responsibility.”

And the Nile Basin Initiative, originally formed in 1999, is finally beginning to succeed in its mission to develop sustainable ways to share and protect the waters of the Nile for the benefit of the 11 countries through which it flows. A hundred years ago, England granted Egypt and Sudan exclusive water rights to the Nile. “Eighty-seven percent of the volume of that water comes from Ethiopia,” said Jones, “and according to those treaties, they were not allowed to touch it! That wasn’t working anymore.”

While Egypt in particular has been loath to relinquish its exclusivity rights, it is now realizing that equitable water access is an important component in quelling conflicts within the region that threaten the stability of neighboring countries. As a result, Egypt, Sudan and Ethiopia signed a historic Declaration of Principals in late March that supports the work of the Nile Basin Initiative. “Former presidents of Egypt have said in the past that if anyone takes a drop of our water, it’s war,” said Jones. “But here they are, signing this agreement, and it’s out of necessity.”

Jones hopes that the building sense of stewardship and cooperation within these areas will provide frameworks for other watersheds that will soon find themselves in similar peril. The Himalayan Basin is beginning to deal with increased water usage from agricultural concerns as its population swells at the same time that climate change is causing its glaciers to disappear, decreasing its freshwater supplies. “That’s going to be the next area you’re going to be hearing a lot about,” she predicted.

And some of the future’s most imperiled basins are a lot closer to home.

“I never thought when I started working on this project, when discussing water availability, that we’d end up talking about California someday,” she said, referring to the historic drought that is now entering its fourth year.

Although California isn’t one of the areas that No Water No Life currently studies, Jones has nevertheless found herself drawn out there twice in the past year in order to document the rapidly deteriorating watersheds and witness firsthand what happens in regions in which neither freshwater awareness nor stewardship seems to have taken hold yet.

“I went to East Porterville and for four months, 700 homes had no running water. Meanwhile in Porterville, five minutes away, you see people watering their lawns. It’s astounding.”

Photos courtesy of the artist