Open trustee seats at both Haldane and Garrison

Voters in both local school districts will be choosing trustees to represent them on the Board of Education as well as deciding on school budgets at the May 19 vote. Petitions to be on the ballot were due April 20 for openings at both Haldane and the Garrison Union Free School. Trustees serve three-year terms and the positions are unpaid.

In an upcoming edition of The Paper, candidates from both districts will be offered the opportunity to explain why they are running and their qualifications.

At Haldane, current board members Jon Champlin and Joe Curto are not seeking re-election as their terms come to an end. Curto was appointed to serve a one-year term to fill the position when Gillian Thorpe resigned, and Champlin wants to be able to go to his sons’ sports matches. Evan Schwartz’s term is up, and he is seeking re-election.

Jennifer Daly and Peter Henderson are currently on the Board of Education at Haldane, with their terms expiring in 2016 and 2017, respectively, ensuring some continuity of experience. Schwartz has been a trustee since 2012.

The Haldane Parent Teacher Association is hosting a “Meet the Candidates” forum on May 13 at 7 p.m. in the school auditorium for the public to attend.

At GUFS, there are also three open trustee positions. Raymond O’Rourke, who is currently the board president, is running for re-election. Christine Foertsch and Theresa Orlandi are not seeking re-election. There are three candidates and three seats: O’Rourke, David Gelber and James Hoch.

In recent years, school funding and budgets have been some of the most complex and challenging issues facing school boards, and that scenario is unlikely to change for incoming board members. It can call for agonizing and unpopular decisions. Last year, Haldane was on the brink of cutting teaching positions and support before a last-minute deal with the Haldane Faculty Association brought cost savings that preserved staff jobs.

This year, districts around the state were uncertain of the amount of state aid they would receive as Gov. Andrew Cuomo used it as a bargaining chip with the legislature for reforms in teacher evaluations and tenure. The numbers were released only weeks before the local budget deadline. Budgeting is further complicated by the tax levy limit. It imposes a cap on district budgets that penalizes taxpayers if it is exceeded, forcing school boards to stay within certain parameters even if that creates an undesirable situation. 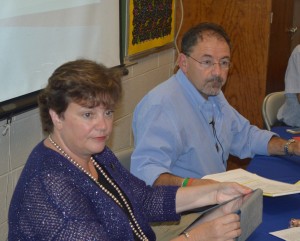 Superintendent of Schools Dr. Diana Bowers and Haldane School Board President Joe Curto at a board meeting. (file photo)

Haldane’s outgoing board president, Curto, who has spent a total of seven years on the BOE and has been involved in the school in many capacities, said that at Haldane, new trustees would be responsible for implementing the strategic plan that Superintendent Diana Bowers has been leading this past year. The strategic plan will be the guide for board decisions for years to come.

Curto said that all districts would struggle to cope with state testing and teacher evaluations. “It’s a mess, and there are interrelated politics with testing and evaluations, and I don’t think anyone understands where it’s going to end up. The thought of the day seems to change every six months.”

Looking back, Curto thought that it was unprecedented to have so much interest in trustee positions. “It’s a great thing to have six people that are willing to make that level of commitment.”

Upcoming forums should reveal how the candidates in both districts intend to approach the issues as board members. These positions have a tremendous amount of influence over how the districts are run, and it’s an important decision for voters.