One of New York City’s pre-eminent avocational choruses, the New Amsterdam Singers (NAS) is nearing its 50th birthday. And for all of those years, Clara Longstreth, a part-time Garrison resident, has been guiding in some capacity and serving as music director since 1968. The chorus, by nature of its size — 70 strong in the main group, 26 in the chamber chorus, specializes in double chorus repertoire, sometimes using echoing effects, as well as a cappella material, and has a reputation for performing music written by contemporary composers in addition to much by Bach and Brahms.

NAS will return to the Chapel Restoration this Sunday, May 30, at 4 p.m. for a free concert. This marks their third appearance there, and the first in six years. 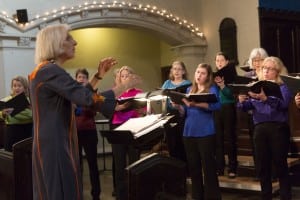 The Chapel Restoration program will consist of the works of several contemporary composers, including musical settings by Paul Hindemith and Morten Lauridsen of poems by Rainer Maria Rilke, James Agee and Robert Graves; choruses from the opera Tess by Matthew Harris with text by Thomas Hardy (“lovely and tuneful,” Longstreth says); and a new work by Ben Moore, Dear Theo, based on letters of Vincent van Gogh. Moore, also a painter, “revered van Gogh,” according to Longstreth, “and read the book of letters he wrote to his brother, Theo. Very moved, he has pulled together pieces of the letters and based this piece on selected passages. It has beautiful melodies and juicy harmonies.”

Many of NAS’ selections are chosen from the numerous submissions Longstreth receives and reviews. She favors doing New York premieres (of which Moore’s is one) or complete premieres. In this program there will also be a spiritual by Dominick Argento and a selection of material from Broadway musicals, including songs by Stephen Sondheim and Cy Coleman.

Longstreth, who attended Radcliffe in the days “when women in the chorus were required to put on lipstick,” didn’t major in music there, and in fact taught before returning to Harvard in her late 30s to obtain a second bachelor’s degree, this time in music. She followed that up with two years at Juilliard, obtaining a post-graduate diploma. “At Harvard,” she recalled, “my heart was going more and more towards music. I didn’t think of myself as a professional for a while, though.” Coming from a family of amateur musicians, she describes her childhood as one with “much singing of rounds in the car, and always Christmas caroling.” 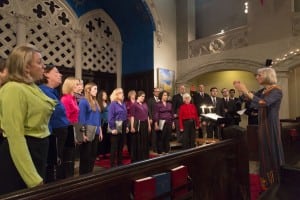 Longstreth began at NAS as assistant conductor and felt for a period of time that “the chorus was improving faster than I was improving.” Still, she caught up and for decades now has steered the musical ship. She auditions the singers, many of whom remain for decades, though there are always yearly openings for all vocal parts. They rehearse weekly — homework required — taking months to put each of several yearly programs together. Longstreth also, critically, chooses the repertoire.

The singers, the majority non-professionals, come from all over the tri-state metropolitan area and range in age from early 20s to over 80 — Longstreth noted that “altos and basses can keep going longer.” In addition, Longstreth has guest-conducted around the metropolitan area at Avery Fisher Hall and Symphony Space, for the New York Chorale Society, the Riverside Choir (for a performance with the Limon Dance Company), the Juilliard Chorus and Orchestra and the Mannes College Orchestra.

By and large, NAS performs three different programs a year, beginning with a holiday series in December, continuing with two concerts in March and concluding the season in May; this concert will be a prelude to that one. All take place at different churches in Manhattan, chosen both for acoustics and their physical capacity to hold such a large number of singers. 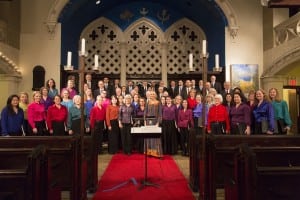 NAS has premiered many works and performed with the New York Philharmonic under Leonard Bernstein, at Alice Tully Hall as a guest of Clarion Concerts, with the American-Russian Youth Orchestra under Leon Botstein at Tanglewood and Carnegie Hall, and has appeared with Anonymous Four and the Concordia Orchestra in Richard Einhorn’s Voices of Light at Avery Fisher Hall, under Marin Alsop.

The chorus also regularly tours internationally and has performed at the Irakleion Festival in Greece; the Granada Festival in Spain; the International Choral Festival at Miedzyzdroje, Poland; the Festival of the Algarve in Portugal; Les Chorégies d’Orange in France; and the Llangollen International Musical Eisteddfod in Wales and in concert in Europe and Latin America. They will be returning to Greece in July.

Free parking is available at the Cold Spring Metro-North parking lot, located just across from the Chapel. For more information, visit chapelrestoration.org and nasingers.org.

Matthew Harris (b. 1956)
If Music and Sweet Poetry Agree

Morten Lauridsen (b. 1943)
“Sure on this Shining Night”
“O Love, Be Fed With Apples While You May”

Stephen Sondheim
“What More Do I Need?” from Saturday Night

Cy Coleman and David Zippel
“Lost and Found,” from City of Angels

Andrew Lloyd Webber and Charles Hart
“All I Ask of You,” from The Phantom of the Opera

Harold Rome
“Don José of Far Rockaway,” from Wish You Were Here