Living in the Hudson Highlands creates unique opportunities for education that incorporates the natural resources in our scenic landscape. From the Hudson River and its marshes to the low, forested mountains, there are opportunities to engage children with nature, and the school forest at the Garrison Union Free School is one of the best examples of this in practice.

Encompassing 185 acres, the Garrison School Forest was gifted from the Osborn, Gunther and Sloan families for environmental education in 1956. It is not to be developed. In 2030, the deed stipulates that GUFS could possibly use it for other purposes if that use is approved by a county court as being in the “public interest.” It is open to the public as well who are welcome to hike there. 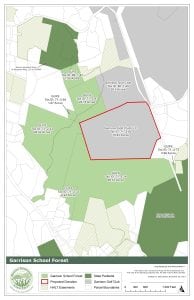 A map shows the area where the Garrison School Forest connects to state parkland and where a donated parcel would make it more accessible. (Click to enlarge)

At the May 20 GUFS Board of Education meeting, Andrew Chmar, executive director of the Hudson Highlands Land Trust, presented the board with a proposal to preserve the land from development in perpetuity. Chmar outlined two possibilities that would increase the size of the school forest, create better access and also involve financial compensation for the district.

The owner of the Garrison Golf Club, Christopher Davis, who is also a chairman of the HHLT Board of Directors, has offered to donate 70 acres to the district to increase the size of the property and give it space to create a parking area for buses and cars on Snake Hill Road, making it easier to transport students to the forest. Currently, buses have to offload students in the road, and there isn’t a parking area.

The land donation is contingent upon the district either allowing the HHLT to purchase a conservation easement on the land or selling the land to the State of New York; both options would prevent development on it. Chmar said: “Ownership would remain with the district. All we’re suggesting is to keep these deeds after 2030 and make them permanent through another action.”

If the state acquires the land, which abuts state parkland, it would expand the Hudson Highlands State Park Preserve. The school forest includes wetlands, meadow, forest and Revolutionary War fortifications of historical value. Chmar was confident that the state would enter into a partnership agreement with the district, similar to the way that the Audubon Society oversees Constitution Marsh in partnership with the state. The agreement could let the district continue using it as a “children’s laboratory” while securing it for future generations.

A conservation easement, the other alternative, is also designed to preserve property from future development. The landowner, in this case GUFS, would still be able to use, access and control the land, even sell it, but it would always have the contingency about development.

In this scenario, HHLT would purchase the conservation easement from GUFS, and the two organizations would become partners. Chmar said that the district would benefit from their legal resources, volunteer network and land-management expertise. He said, “We would have a stake in it and could assist in cases like the current legal situation the district is in now.” GUFS has filed a lawsuit against a landowner whose property borders the school forest for restricting access to the students and the public.

In either scenario, the district would be paid for the land. The state would pay full market value, which Chmar estimated at $800,000 to $850,000 based on an appraisal. The HHLT would pay for the land’s development rights for the conservation easement, which are worth approximately $375,000 based on the appraisal. The district would still be able to sell the land after 2030 with an easement and could even sell it to the state at that time. 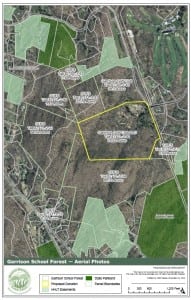 The Environmental Education Committee at GUFS, a group of 12 to 15 parents and one teacher who have been actively trying to make the school forest more widely used by families and classes, see the conservation easement as an important step, and the donation of 70 acres would clear many obstacles that prohibit the forest’s use now.

Board member Christine Foertsch, whose term is expiring at the end of June, made a statement at the meeting and said: “Educating our children in environmental awareness and stewardship is not a luxury, but an essential aspect to their development as fully rounded, responsible teenagers and then adults. The future will only bring more and more severe environmentally based challenges, and environmental education in early years forms the basis for material and responsible capacity to consider and meet these challenges.” Foertsch has been active with the Environmental Education Committee.

As to the next steps, Foertsch was unclear. She said, “It was left hanging. Raymond [O’Rourke, board president] said we would digest it.” Jill Lake, parent of two children at GUFS and an Environmental Education Committee member, has taken up the cause and personally reached out to encourage parents and the community to get involved and be informed. Lake said: “There are lots of questions to answer and lots of ideas to explore. The Environmental Education Committee just met on May 26 and came up with a good approach that we can share very soon.” Lake sent out a letter to parents detailing each scenario.

If the board chooses not to act on any of the proposals, nothing would change. The district would be faced with the same challenges about lack of parking and bus access; it would have sole responsibility for managing the land and handling legal disputes and maintain complete ownership. A future board could review the fate of the land at any point in the future and after 2030 could propose other plans for it. The HHLT’s presentation will be made available on its website soon.