Over the vehement opposition of dirt-road advocates, a majority of the Philipstown Town Board on Wednesday night (June 10) voted to expand the scope of a drainage project on South Mountain Pass, a scenic if rut-ridden unpaved lane at the southern end of Philipstown.

The vote involved the rather arcane issue of approving a change to a work order authorized in March to upgrade drainage on a stretch of South Mountain Pass that climbs uphill not far from the intersection with Route 9D. Initially, the Town Board and Highway Department foresaw installation of 600 feet of drainage; as spring wore on, they decided to continue another 710 feet — hence the need to ratify a change order — thus making the total length of drainage work approximately 1,310 feet, or about one-quarter mile.

The board acted at the third of three meetings in two weeks devoted in all or part to the topic; at the two earlier meetings, the board also discussed the possibility of following up the drainage work by paving about 2,600 feet of South Mountain Pass. Paving, a separate undertaking, would require a second set of designs, bids, and ultimately, a fresh Town Board vote and did not figure in Wednesday’s vote or to any extent in Town Board members’ comments. 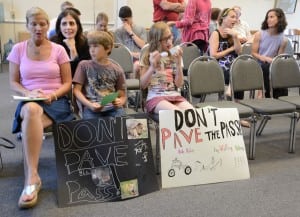 Watched by a roomful of critical residents, some accompanied by children holding anti-paving signs, Town Supervisor Richard Shea and Councilors John Van Tassel and Robert Flaherty voted “yea” on the expanded drainage work; Councilors Mike Leonard and Nancy Montgomery voted against it, citing insufficient leeway or little time for all parties to reach a common understanding.

A winding, rocky road bordered by a stretch of Appalachian Trail as well as properties sporting homes of various vintages, South Mountain Pass runs diagonally between Route 9D and Route 9, both New York State highways. The challenges of maintaining it have come up at Town Board meetings in the past, especially recently, and on Wednesday Shea announced at the onset that “we’ve had a lengthy discussion regarding this issue” currently on the table — South Mountain Pass drainage. “We’re putting it to a vote tonight,” he announced, also stating that the board would not entertain more public comments about it.

But the board made an exception for Old Road Society President Terry Zaleski, who was unable to attend the previous sessions.

His voice sometimes at the level of an angry shout, at others moderated and even, Zaleski accused the town government of operating “behind closed doors.” He mentioned a workshop held last fall to prepare the Highway Department’s 2015 budget where, he said, “it was clearly and unequivocally stated that there was no money for any major paving project” in 2015. Now Town Board members speak of paving a piece of South Mountain Pass, although “there was no outreach from you to us,” he said. He contended that more than road erosion is at stake.

“I see an issue of erosion in the community of trust and confidence in the way the process works” and in the board itself, he said. “There are serious concerns regarding participation of the group” of dirt-road supporters, “the way it was shut down, what happened on June 3” at the previous meeting, and more. Zaleski also raised questions of legality. “It may be illegal” to proceed, he said, suggesting that the expansion of the drainage work over the original parameters might represent “a material change, such that a new bid may have to be let. You may not be able, possibly, to go forward. For that reason alone I’d urge you to hold off on this vote.”

Responding that Zaleski’s “whole diatribe and outrage is unfounded,” Shea bristled at the insinuation of secret decision-making. “That’s absolutely not true. Nothing takes place behind closed doors”; instead, the board regularly holds workshops to thrash out ideas on matters it must address, he said. “If people choose not to attend those meetings, it’s up to them.”

Like Zaleski, Nick Angell, a South Mountain Pass resident, remonstrated. On prior occasions, he had urged the Town Board to limit the drainage work and allow residents to pay for a test of alternate methods. “This is an issue of unfairness,” Angell shouted out. “I object to the entire procedure.”

Shea then called for a vote, but Montgomery first sought an opportunity for board members to speak. She recalled that she had left the June 3 workshop undecided. “I do think we need the drainage, regardless of the paving,” she said. “I don’t know if this is the drainage we need.” At the same time, “we seem to have a lot of ‘roads scholars’ around who seem to know, or think they know, what should be done — and it’s to me a lot of speculation.” Nonetheless, she continued, “I do feel the contention I’ve witnessed tonight warrants more time for this to be discussed until we are comfortable as a community to come to that decision.”

Leonard observed that “there are a lot of people that raised issues” and referred to his own dialogue with South Mountain Pass residents as well as consultation with Ron Gainer, the town’s advising engineer, and his other efforts to become well-versed on the subject. “I tried to do what I could in the short period we had,” he said. “I’m a little disappointed in this process.”

Alex Clifton, a South Mountain Pass resident who objects to paving, said that “opposition continues to grow. It just seems that the more we oppose it,” the more adamant the town government gets. “That’s what’s troubling about tonight.”

In other business, the board reiterated its support for the proposed Hudson Highlands Fjord Trail by passing a resolution specifically endorsing the recently unveiled master plan for the project, which would link Beacon and Cold Spring via a pedestrian and bicycling pathway paralleling the river, Metro-North tracks, and Route 9D.