Haldane fourth-grade students in Simon Dudar’s class had the world premiere of their film Muhheakontuck – The Forgotten Valley at the Jacob Burns Film Center in Pleasantville on June 3. The film was screened for them and their families as well as Haldane Elementary and Middle School Principal Brent Harrington, Assistant Principal Julia Sniffen and teachers. Students from JFK Magnet School in Portchester also viewed the film and shared their gardening and cooking film clips with the Haldane students. 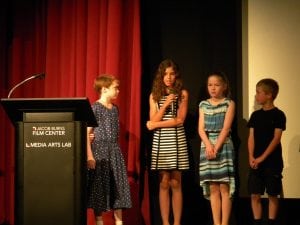 Haldane fourth-graders answer questions about the films they created at the premiere at Jacob Burns Film Center June 3. 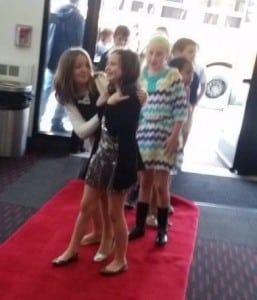 Haldane fourth-graders walk down the red carpet at the Jacob Burns Film Center, where their films premiered on June 3.

When the student filmmakers arrived at the Jacob Burns Film Center they walked on the red carpet and were given bags of popcorn and escorted to prime seats. After the screening there was time to ask the filmmakers questions about how they created their films.

The students reflected on their experiences making their film after the premiere. Amanda Johanson said: “One of my favorite things about this movie was creating the iStopMotion clips and recording the narrations. I have definitely learned a lot about making iStopMotions to iMovie and I can’t wait to teach my siblings these things.”

Westley Watman chimed in: “I liked seeing our movie 20 feet tall. That was very exciting!” Niamh Fortuna said, “I really enjoyed working on this project all year and I have mixed feelings about being done with it.”