Raising awareness of the lives of farmworkers

It is the lot of the artist to have a “day job” — something unaffiliated with their creative process, which nonetheless serves to support it. For sculptor Wilfredo Morel, this traditional model is not how his life is framed. His day job at Hudson River Health Care (HRHC), a nonprofit, federally qualified health care system offering a range of medical services for underserved communities in 10 counties, dovetails with much of his art, most notably his recent series, Farm Art, currently on display at Cold Spring’s Gallery 66 NY. 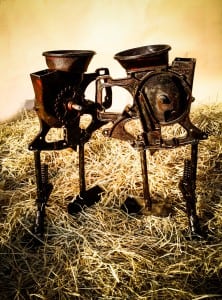 The Farm Art sculptures, all made from salvaged and restored farm equipment, were created to raise awareness of the seasonal migrant farmworkers who, year after year, maintain nearby farms, and also of the many Latino immigrants who have become vital to Hudson Valley farming community. The work ranges from semiabstract images to representational bronze sculptures and metal wall reliefs.

Morel has been creating steel sculptures and restoring existing works for several decades. His local art installations include a riverfront sculpture at China Pier in Peekskill composed of recycled piping from the old Fleischmann gin plant. Another of his riverfront works of recycled materials is permanently installed at the Mid-Hudson Bridge (between Poughkeepsie and Highland). He also completed the refurbishing of an antique bronze sculpture portraying St. Augustine for St. Augustine’s Church in Ossining, where it is the central focus for a church plaza and park created around it. He also completed 15 works of recycled materials for installation as roadside art along Route 9, sponsored by Peekskill area industry, as well as completing a life-size abstract steel sculpture that is permanently installed at the Marist College Student Center in Poughkeepsie. His work is also found in many private collections. 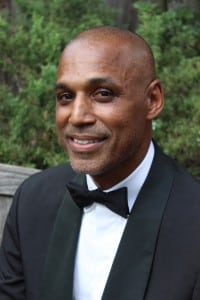 Wilfredo Morel at the Gallery 66 NY opening; photo by A. Rooney

Farm Art was a natural outgrowth of his work at HRHC. His work there in different capacities, including as director of Hispanic health and, before that, as director of Genesis HIV Services, as well as artist-in-residence, has brought him into a great deal of contact with the migrant and immigrant farmworker population of the Hudson Valley.

Farm Art consists of sculptures based on the lives and situation of farmworkers. Morel has been working on the series for about eight years now, supported by Red Hook’s Greig Farm, along with HRHC.

“What brings us together is the mission: bringing wellness and human rights to the these members of the human race — to those not part of the equation,” Morel explained. “I was first hired in the area of infection diseases: to identify individuals who were at risk or infected with HIV/AIDS.” After studying sociology at Lehman College in the Bronx, Morel began a reverse commute to Peekskill for his job at HRHC.

“Art was always there, though,” he said, “and the beauty of it is that while HIV was prevalent in that community, the city of Peekskill was just beginning to revitalize. I found there was a call for artists there, and I was able to find a place in Peekskill and I opened a small-scale gallery.

“In 1991, Peekskill held an Open Studios and mine was part of it. The CEO of HRHC walked in and recognized me, asking me, ‘Don’t you work for the health center?’ After I answered yes, she asked me ‘What do you do?’ and I told her I was a sculptor. She then asked, ‘How can you bring this art into our organization?’ That started it all. I was able to combine three elements very important to me: health care disparity, communication and the use of arts as a conduit. I saw it as an opportunity to look at health care as an integral part of the whole person, and I was able to begin using the art to start the conversation. It worked. We began by redesigning the ugly waiting rooms, and bringing in the arts in other ways … As I was working with a high-risk community, from children through to grandparents, I saw how art can serve as a way to create common ground. From that point on, my art became more focused on human rights, telling stories of the condition of lives.” 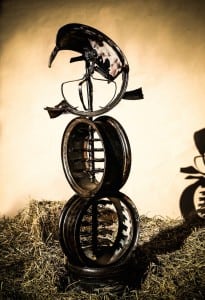 A chance meeting with Norman Greig, owner of Greig Farm, a “grower who advocates for equality of the farmworker,” led to Greig extending an invitation to Morel to make part of the farm into his studio. They agreed that whatever was created there would be related to the subject of farms and farmworkers and that a portion of the proceeds from the sale of any pieces are donated to support HRHC farmworker health programs. “I asked him to tell me the story of the farm, and he told me, ‘This is where a shop used to be.’ Now a pick-your-own farm, there used to be farmworkers there, but no more. Morel has worked there since, and every piece in Farm Art was developed from equipment used on that farm, located in Red Hook.

Morel urges people to look at the lives of farmworkers from the perspective that “they demonstrate the life that God would like us to have: Live off the land. They have done that, but the payback is practically being put on the cross. So, how can we support them? This show is about telling the story, talking to people, raising consciousness. At the farm, I created a space where people can go and walk around the property. My shop is right at the farm. My intention is to get people to talk about keeping our farms viable and open. Most artists want to see their work sell. I like that too, but most of all I love to see where the conversation is.”

Farm Art sculpture will be on exhibit throughout the month of August, paired with Organic, an exhibition of photographs by Francesco Mastalia of area farmers and chefs, taken on a 17,000-mile journey through and around the Hudson Valley.