Philipstown residents from Garrison and beyond Wednesday night (Aug. 19) voiced varying opinions about making the Garrison Volunteer Fire Company and its service area — currently under Town Board control — into an autonomous new Garrison Fire District run by its own board of commissioners beyond the town government’s oversight.

The support, opposition and general comments came during a public hearing held at Town Hall by the Philipstown Town Board, which kept the hearing open to accommodate written comments and more input. The board invited the debate last month in announcing plans to explore creation of the independent fire district before autumn. 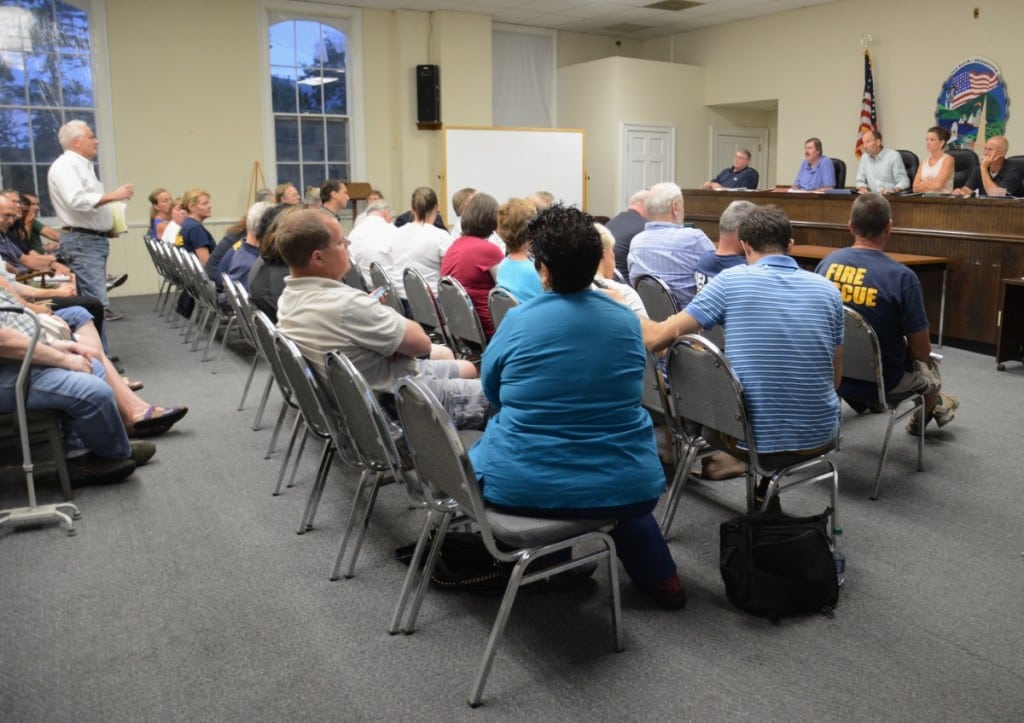 The audience at the Town Board hearing on the proposed Garrison Fire District filled the room.

The new jurisdiction would have to adopt its first budget by Nov. 4. A proposed budget drafted by the Garrison Volunteer Fire Company (GVFC) proved an immediate sticking point Wednesday. At $821,204 for fiscal 2016, the proposed budget is $216,502 higher than the 2015 GVFC budget of $604,702 set last fall by the Town Board.

Over the last decade, the GVFC and Town Board have sometimes clashed heatedly over the appropriate level of funding, supplied by taxes paid by Garrison residents.

According to Mark C. Butler, the town’s consulting attorney (and veteran firefighter), the Town Board has until Oct. 1 to decide whether to establish the new district. Should it go ahead, it would then appoint the initial five fire district commissioners, who would adopt the district’s budget. 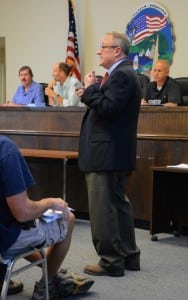 With establishment of a fire district, “the district becomes legally responsible” for the GVFC and service in the area covered, “rather than the Town Board,” Butler explained in an introductory session before the public comments began. “The Town [Board] gets out of the fire protection business entirely.”

And that, said Supervisor Richard Shea and other Town Board members, means they can concentrate more on their other responsibilities, instead of devoting endless hours to GVFC matters. “I’m in favor of it,” Shea said of the fire district. However, he too expressed misgivings about the amount in the GVFC’s proposed fire district budget.

Because state law exempts new jurisdictions, such as fire districts, for a year from complying with the 2 percent-or-less cap on increasing property taxes, the new district could raise the Garrison firefighting budget significantly — and in doing so set a higher base from which to begin in ensuing years when the tax cap applies.

Terry Hannigan, lawyer for the GVFC, justified the $800,000-plus figure. “The challenge we had was creating a budget that adequately reflects what the real expenses are going to be,” especially for such items as firefighter gear, he said. “There are things that haven’t gotten done, haven’t gotten replaced, given the austere nature of the way the budgets have gone” under the town government. 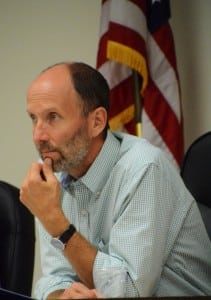 He noted that in 2005, the GVFC budget was $535,000, and in 2015 it is $510,000 (for the firefighting end, aside from the pension or service award and worker’s compensation charges). Those budgets “have essentially eviscerated the reserves the fire company had,” Hannigan declared.

Shea, though, termed the $821,204 figure “glaring” and doubted it would survive. “I think there’s going to be room for a downward trend in this budget. That’s what we’re going to be looking for, to get to a level of comfort,” he said.

Joe Regele, Garrison resident and indefatigable scrutinizer of GVFC finances, protested the proposed budget. “To say I’m gravely concerned is an understatement. The idea that a quarter million dollars somehow needs to be added to this [2015] budget is ridiculous,” he said. “In just even starting the negotiations there,” with that figure on the table, “the taxpayers have lost.” 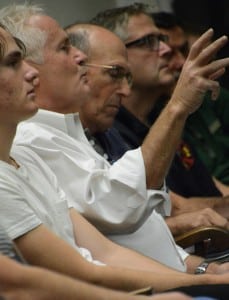 Joe Regele (second from left) emphasizes a point of opposition to the proposed Garrison Fire District.

Regele also argued that “the fire company finished each of the last several years with a surplus. The economics of this thing are completely whacked. I’m looking to the Town Board for leadership,” instead of it “rolling over” to do the fire company’s bidding, he emphasized.

“Hold it!” Shea interrupted sharply. “The board has never rolled over. This is a proposed budget. This will be reviewed. A lot of this stuff is still very much contingent.” He later referred to appointment of the right commissioners as likewise significant — “the big issue” and “the whole crux” of the decision on whether to proceed.

Zshawn Sullivan called the proposed budget “a pie-in-the-sky number. If you start at that number and go down, you’re doing a disservice to Garrison taxpayers,” she said.

Stan Freilich, like Regele a critic of GVFC finances, raised the issue of town-wide fire department consolidation, the 2011 recommendation of an outside expert and seasoned firefighter who analyzed the Philipstown situation but was widely castigated for his conclusions. “This action seems to go exactly the opposite direction” from consolidation, Freilich observed.

Councilor Nancy Montgomery, who helped bring about the ill-fated 2011 study, ruefully recalled “when we tried to examine this and it didn’t go so well” and noted that hard feelings linger in some quarters. 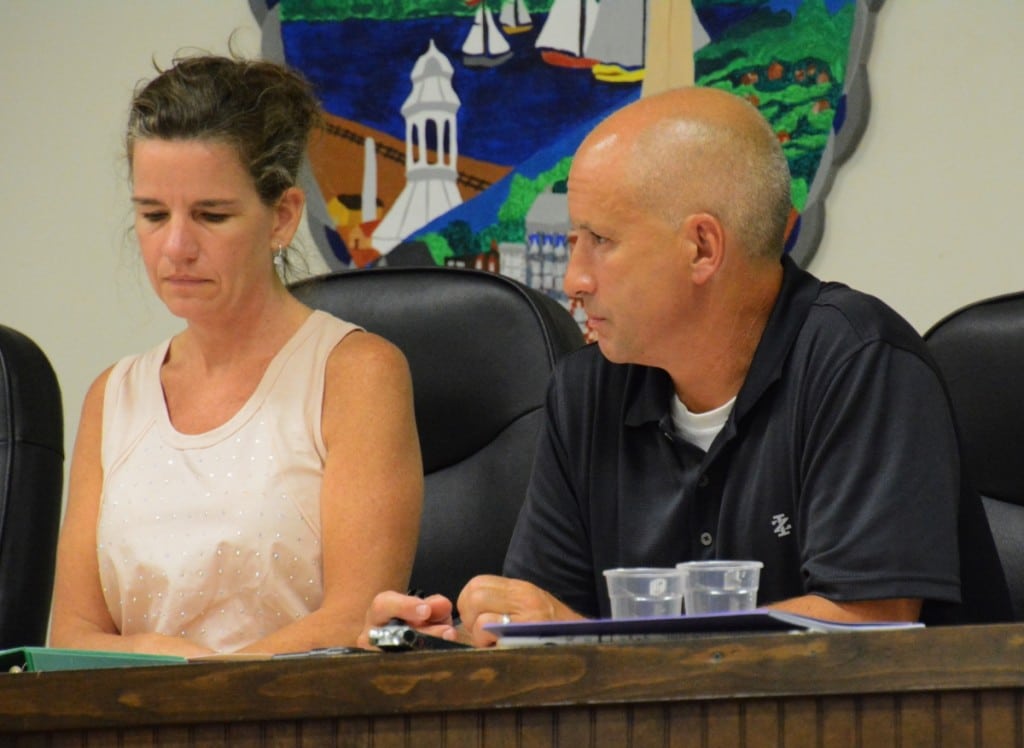 “I wish I could put forward the leadership to consolidate. It’s been very difficult just to get to this point with the fire and EMS services,” she said. “This is one more step. I wish we could take the leap and consolidate. We’re not there yet. But I’m confident we will be.”

“Here we are taking on another big issue in Philipstown. I’m very proud of us having the courage to face another one. The board should be commended” as well, dealing with rough issues and taking up the fire district question fresh from the latest dirt roads round, he said. But he added that he can “see a self-inflicted wound,” in the proposed budget figure. “Why are we starting to put an obstacle to the process that perhaps doesn’t need to be there?”

Supporting a district and firefighters

There was backing for the fire district as well.

“We’re arguing about things that don’t exist” yet, said Brother Ted Novak of Graymoor. “Let’s get with the fire district. We’ll go from there.”

Lillian Moser, who belongs to Cold Spring Fire Company No. 1, suggested that “we need to look at another M, besides money. We need to look at morale and we need to look at membership” in fire companies. She said for GVFC critics “maybe the question is ‘join, become a member,’ ” and don’t forget that the firefighters are volunteers whose service costs far less than that of a paid fire department.

“Thanks for bringing that up. There shouldn’t be this distinction” and division in the community, Shea agreed.